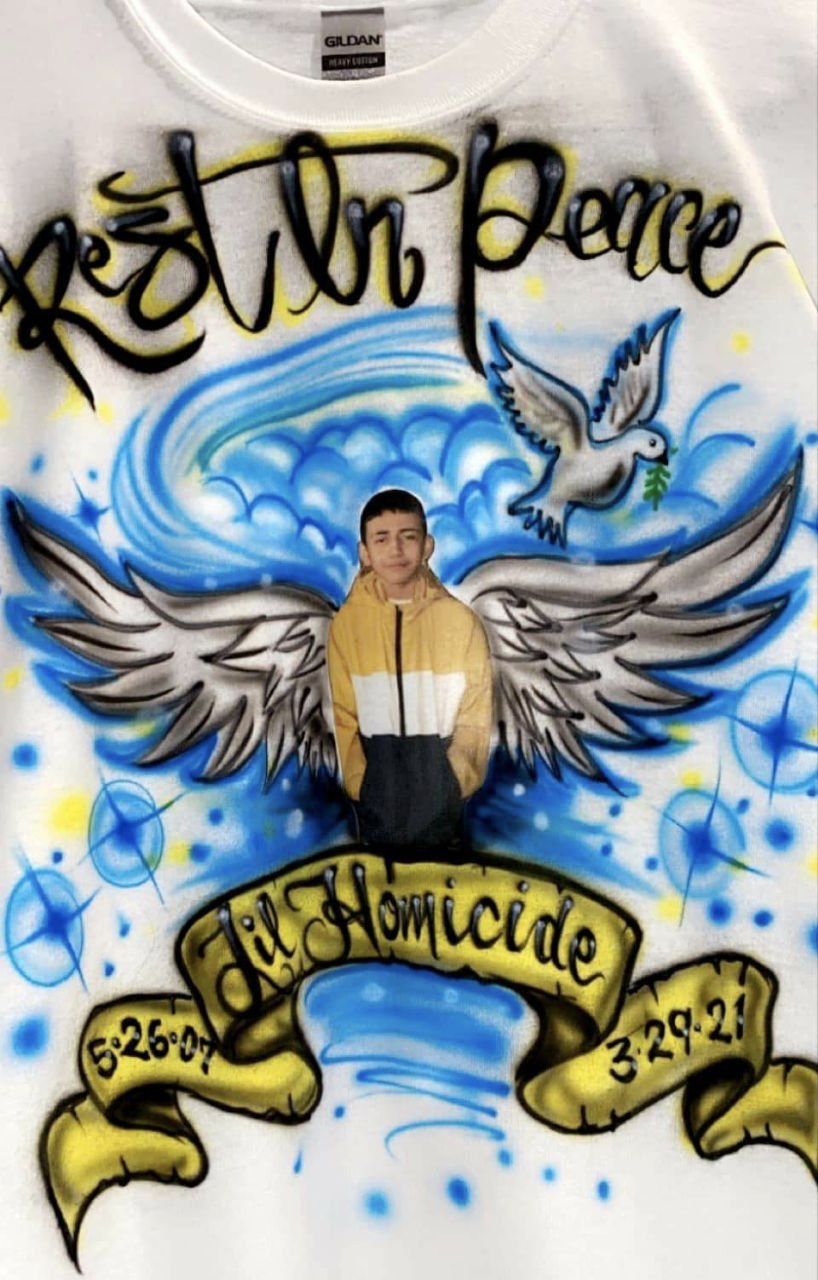 I asked last night if there would be a riot in Chicago after the release of body camera video showing a cop shooting junior gangbanger Adam “Lil’ Homicide” Toledo about a second after he’d sneakily ditched the gun he’d been holding. From WGN TV in Chicago:

CHICAGO (WLS) — The release of video showing the fatal shooting of 13-year-old Adam Toledo by a Chicago police officer sparked peaceful protests downtown and in the West Loop Thursday night.

Dozens took to the streets, protesting police and calling for justice for Adam Toledo. One group marched from Millennium Park up Michigan Avenue to the Magnificent Mile.

The split second decision by the Chicago police officer is under scrutiny as video is released of the fatal shooting.

Later, others made their way through the West Loop. Both protests briefly blocked traffic and then there was a protest right outside Chicago Police Headquarters.

“He put his hands up and was still murdered. So I have a question: what more could he have done?” said Rabbi Michael Ben Yosef, Chicago Activist Coalition for Justice.

Not be a gang member, not be out on the streets in the wee hours with a guy who fires 8 shots, not take the gun from the 20 year old shooter who didn’t want to be tried as an adult, not flee from the police with the gun in his hand, not ditch the gun behind a fence in a surreptitious manner hoping the cops won’t notice him dropping the gun, and, tactically, not turn around until his hands are already raised to not make it look like he’s turning to shoot it out.

ABC 7’s analysis of the bodycam video is here.

Ahead of Thursday’s emotional events, the city and some businesses prepared for the possibility of violence. Windows were boarded up and city vehicles stood ready to block traffic, scenes reminiscent of last spring.

Toledo was from Little Village, the main Mexican neighborhood in Chicago. During the George Floyd Memorial Riots last May, Latin Kings gang members took up armed patrol of Little Village and drove off carloads of potential black looters. So, in retrospect, it’s easy to see why black / Mexican solidarity turned out to be a chimera.

Do not come into Little Village expecting to loot! The Latin Kings & Gangsta 26 are standing up and protecting their neighborhoods! #LittleVillage #LaVillita #LatinKings #26 https://t.co/5u7wEub7it

By the way, my question last night about whether there’d be a riot or not illustrates a subtle difference between my approach and the Philip Tetlock Superforecaster approach endorsed by Scott Alexander and Arnold Kling, who is running a contest to see which pundit has the best 2021, including giving credit for making quantified forecasts.

A 13 year old Mexican kid, however, falls into the beige zone from which it was worth raising the question to find out what the answer was.

In general, in Kling’s contest, I fear I’m not going to turn out to be a good use of a first round draft pick for subtle reasons of how my personality interacts with the rules of the game.

For one thing, I seldom feel the urge to make predictions about propositions that have near term time limits, such as elections. One reason is because I’m risk averse. I don’t like to give my enemies easy ways to make fun of me by getting something definitely wrong.

A more subtle reason is that I don’t like time-limited topics because the utility of the facts I’d need to learn drops way off after the time limit expires.

Also, most of the I bets I come up with involve currently existing facts, which could be looked up. For example, if I read an article in praise of looting with a picture of an odd-looking person wearing a ladylike dress and pearls, my Spidey-Sense likely tells me: I bet that’s an ex-man. But that kind of “I bet” isn’t a real bet on the future because my urge is to immediately look up whether I’m right or not. If I’m not right, I might not ever mention it.

A another reason is that arenas that are attractive for betting or investing purposes, such as predicting elections from polls, attract talent and thus leave me with little opportunity to add value. Perhaps if I’d gone full time into election analysis in 2005, I could have beaten Nate Silver to dominance of that niche by a year or two. But, I’m more of a dilettante by nature, who gets bored with topics after awhile. And now that Silver methodically wrings most of the obvious value out of election polls, I tend not to have much interest in predicting elections because if anybody asks me, my first thought is, “I dunno … What does Nate Silver say? He’s not perfect, but he’s better than most at his job.”

Fourth, my incentives are sometimes at odds with my being right. For example, I might try to predict whether in this summer’s Olympics, the remarkable streak of 9 straight Olympics in which all eight finalists in the men’s 100m dash are substantially sub-Saharan will continue. I’d say off hand, without looking into the contenders this spring, that the odds are that the streak will continue. On the other hand, I don’t believe that is a sure thing. Some nonblacks usually make the semifinals, so one might enjoy some luck this this time and make the finals.

So, if I predict that Sub-Saharans will make up all 8 finalists and that comes true, that’s a pretty ho-hum prediction. After all, it’s happened 9 times in a row. If I’m wrong, it will be seen as PROOF that Sailer is a charlatan.

On the other hand, if I predict that this streak will end this time, if I’m right I look good for two reasons: I predicted something unexpected, and I help demonstrate that I’m actually a moderate, reasonable student of nature vs. nurture rather than the rigid HBD extremist of legend. If I turn out wrong, and the streak goes to 10 Olympics in a row, well that just shows that reality is more HBD than even Sailer expected.

Also, I have a hard time thinking in terms of percentages such as 90% or 60% probability. Obviously, if I bet on a large number of propositions, the arithmetic works out well. But I can’t see myself doing enough for that to kick in.

Finally, does betting make for better analysis? I could imagine that having publicly established positions on the probability of many things might make me less willing to update my expectations and instead hunker down and explain why I was really right, rather than just learn from experience.

Save ListCancel
Endorsed Only
Trim Comments?
• LOL: ic1000, Redneck farmer
• Replies: @Pontius
@Buzz MohawkThe white kid got the biggest box......typical.
• Thanks: ic1000
• Replies: @anon
@Buzz MohawkWe here who complain about immigration from South of the Border would do well to specify that our concerns are more ones of economics and population than race or culture. Ron Unz has repeatedly implored us here to reconsider the racial complaints and indeed insults that we sometimes fall into.Pretty sure Ron Unz doesn't actually live near any concentration of Mexicans and he sure as heck isn't near any Salvadorians. It doesn't matter who his gardener or housekeeper may happen to be. In any case, Latino people (okay, âHispanics,â whatever that means) have been a noble segment of our Southwestern population since the beginning of the United States, in fact since long before.Don't get carried away. The population of the US Southwest in 1820 wasn't all that big. The California settlements didn't really get started until the 1770's and they did not grow fast. All that "the border moved over me" is generally spouted by a 2nd or 3rd generation illegal. I grew up for many years in a part of the country where there were many Hispanics descended from hundreds of years of Americans. Unless you grew up in Santa Fe, NM that is bogus. My first friend in Colorado was one. The area now called "Colorado" was occupied by Indians well after 1620. The Spanish mounted expeditions into the area of Pike's Peak to punish Indians for raiding, but there was no settlement there, because it was beyond the line drawn by the King of Spain. Only after Mexico became independent of Spain in the 1820's was there any further European style settlement, mostly in the San Luis valley. "I know a good one" is not a policy. I know good ones, too, I've been to more than a few weddings. But I've also been to parts of Mexico, and it is a different country with different history. "Santa Muerte" is a thing in parts of Mexico. It doesn't belong in the US - doesn't belong anywhere, really, but that is a different issue. Salvador, Guatamala, Honduras, etc. are even further away in distance and culture.
By the way, Mexico has quietly requested aid from US Border Patrol officers to help their border officials on the Guatamalan border. I wonder why they did that?Replies: @Buzz Mohawk
← So, Will BLM Riot Over a Mexican Tonigh...Democrats Finally Find a Free Speech Is... →