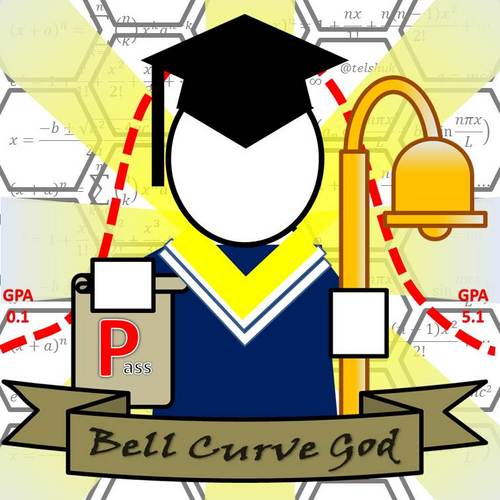 From Material Religion, an academic journal:

Mimicking Religion as Coping Strategy: The Emergence of the Bell-Curve God in Singapore

Lily Kong
This is an Author’s Accepted Manuscript of an article published in Material Religion, 27 October 2016,

… The importance placed on education and, relatedly, examinations, in many Asian societies is well known. The means adopted to cope with the stresses that come along with such intensity are myriad. It is in such contexts that the emergence of a âBell Curve Godâ in Singapore must be understood.

The âBell Curve Godâ originates from the bell curve grading system, where the performance of a student in an examination is determined based on his/her performance relative to his or her peers, and grades in a class are expected to be distributed along a curve, which in the most âpristineâ is a normal distribution (that is, a bell curve)….

The Bell Curve God is characterized as capable of granting âblessingsâ to those who worship and pray to it. Students pray for its intervention to not have their grades classified in the lower end of the curve. They pray for âdeliveranceâ and seek reward in the form of grades âsustenanceâ Physical shrines may be decorated with items such as food and candles. A series of âritualsâ is also involved in the worship, and a set of instructions accompany the shrine to enact worshipâe.g. taking sweets from a glass jar, ringing a bell, throwing dice, bowing, reciting words (Figure 2). A certain informality prevails, with pictures that are hand-drawn, and instructions handwritten, with spontaneous, almost makeshift âaltarsâ thrown together. As much as there is a serious element to the worship of the Bell Curve God, it simultaneously carries humor, as caricature drawings of the âGodâ create amusement. The âofferingsâ presented to the Bell Curve God include popular snacks such as âPocky sticks,â which carry a physical resemblance to the joss sticks used in Chinese worship. Such expressions suggest a creative imagination among students and offer some amusement for them as they face impending exams. In one local university, students suggested the theme of âYou are your GPA [grade point average] Dayâ as a âcelebrationâ of April Foolâs Day, and got librarians with a sense of humor to play out the theme at the library. Among the âreligiousâ elements was the setting up of GPA confession booths, where students could go to confess why their GPA was so low or so high. The âtruly hopelessâ could then be directed to the Bell Curve God to seek forgiveness/blessings, and they could pen their wishes to offer to the Bell Curve God. The playfulness apparent in the association with April Foolâs Day is also manifest in the âworshipâ on social media sites such as Facebook and Twitter, where pages are dedicated to the Bell Curve God. The informality and sense of humor associated with this âworshipâ is apparent as students engage in a playful and interactive process of communicating with âGod.â For some, all of this is about finding humor through the mimicry of religion, while for others there may be a genuine sense of investing in insurance through prayer. In a competitive examination-important context, the Bell Curve God constitutes part of the range of coping strategies for stressed students.

In contrast, in America the Bell Curve serves as a sort of Satan or Cthulhu, an omnipresent source of evil threatening to undermine the faithful’s belief in equality, a monster so sinister its existence should never be mentioned in explaining why life in America is the way it is.

Save ListCancel
Endorsed Only
Trim Comments?
• Agree: YetAnotherAnon
• Thanks: Dan Hayes
• Replies: @James Speaks
@AnotherDadI wasn't aware of Marlo's "poor character." Please elucidate me. Regardless of her supposed faults, she "... serves as National Outreach Director for St. Jude Children's Research Hospital, which was founded by her father Danny Thomas in 1962. "

Regarding "married an Italian," actually Danny married a Sicilian woman. Scicilians trace their lineage back to the Phonecians, who also populated Carthage, Tyre and Biblio, so it's not as though he married outside his greater ethnic group.
, @Dan Hayes
@AnotherDadPhil Donahue had a large family before hooking up with Marlo. At least the Phil+Marlo union did not spawn any Marloettes!
← Argentina Establishes a Transgender Quo...Washington Post: Integration Bad, Segre... →