BAME is supposed to mean “black, Asian and minority ethnic.”

By LARA KEAY and JACK NEWMAN FOR MAILONLINE

Black, Asian and Minority ethnic NHS staff could be taken off the front-line over concerns they are more vulnerable to coronavirus.

New guidance sent from NHS England to hospitals nationwide asks that BAME staff are ‘risk-assessed’ on a ‘precautionary basis’.

Figures have shown 63 per cent of all health and social care workers who have died from coronavirus are from ethnic minority backgrounds, despite only making up 16 per cent of the workforce. …

Or perhaps the virus is more common in urban areas where a higher proportion of BAMEs live than in, say, rural Cornwall? Here’s a new map from the Guardian: 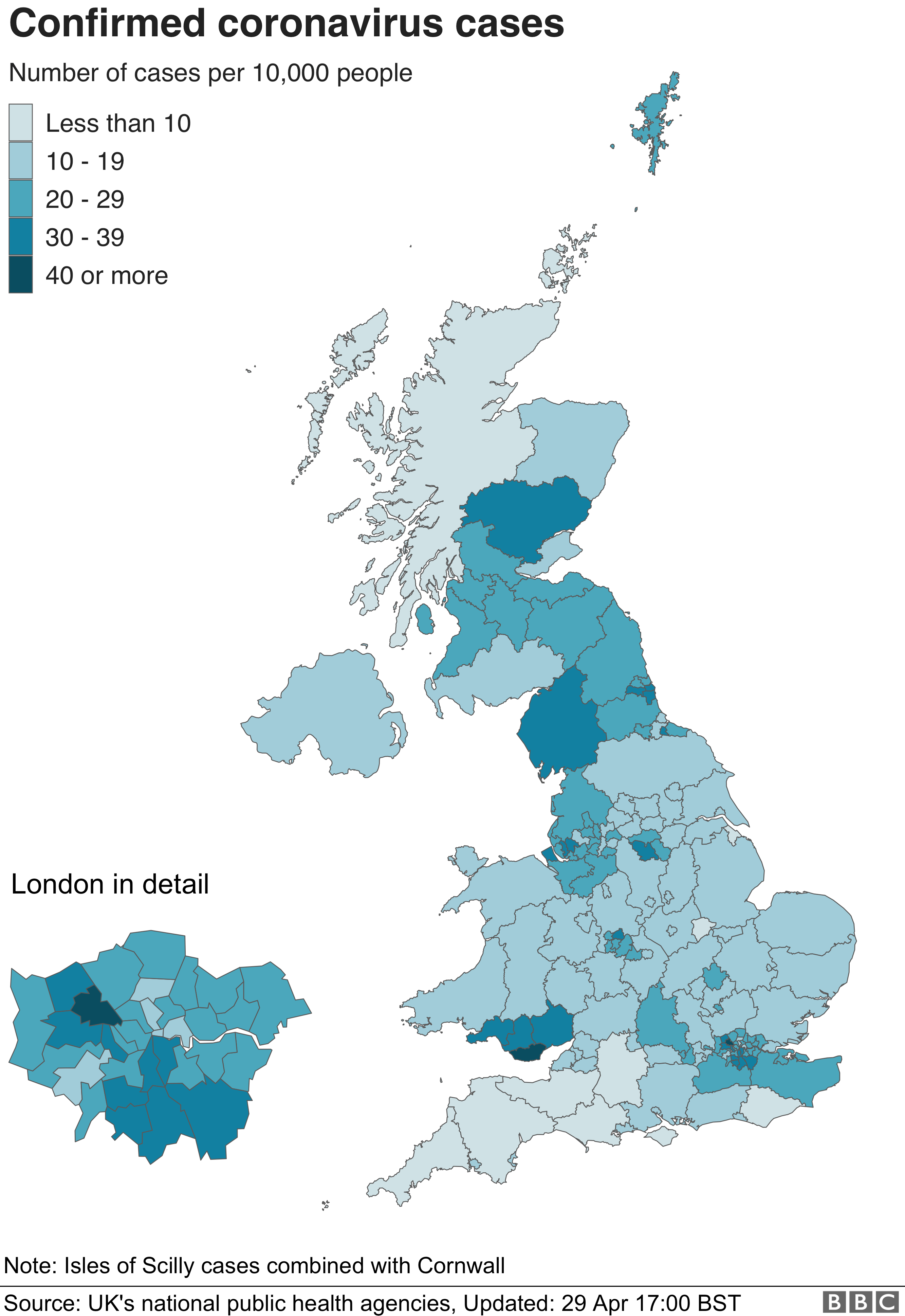 Back to the Daily Mail:

Hospitals received a letter from NHS chief executive Sir Simon Stevens and its chief operating officer Amanda Pritchard, according to the Telegraph.

The letter reads: ‘Emerging UK and international data suggests that people from BAME backgrounds are also being disproportionately affected by Covid-19.

‘Public Health England have been asked by the Department of Health and Social Care to investigate this. In advance of their report and guidance, on a precautionary basis, we commend employers should risk-assess staff at potentially greater risk and make appropriate arrangements accordingly.’

This could mean that BAME doctors, nurses and other hospital staff are given lower risk or remote jobs away from coronavirus wards.

Earlier this week the Somerset Foundation Trust became the first in the country to prioritise BAME staff for access to facemasks.

… The NHS trust is treating all its black, Asian and minority ethnic employees as ‘vulnerable and at risk’ of coronavirus.

The trust has now included all its BAME workers in the vulnerable and at risk group, and is asking managers to have conversations with them and discuss concerns.

In a letter to staff, the trust’s chief executive Peter Lewis said: ‘While we don’t yet have any conclusive research or national guidance, we feel that is the right approach to take. …

The letter said BAME staff and their families will be able to access testing within the first five days of developing any symptoms, and any who require an FFP3 mask – which offers greater protection than a normal surgical mask – will be supported to be fit-tested as soon as possible. …

The Government has launched an inquiry into the ‘devastating disparity’ which means BAME patients are at disproportionately high risk of becoming critically ill with coronavirus.

Scientists say the disparity may be because they are more likely to suffer from conditions including diabetes and high blood pressure.

Social and demographic factors also play a role, as BAME people are more likely to live in densely populated areas which may make social distancing harder.

The British Medical Association (BMA) also suggested that BAME doctors may feel less able to raise concerns about inadequate personal protective equipment (PPE), as they report higher levels of bullying and harassment in the workplace.

He said: ‘These figures are staggering. They are worrying and disturbing. In fact these doctors have come from other parts of the world to provide vital care and save other people’s lives in our health service and now they have sadly paid the ultimate sacrifice.’

The first ten doctors in the UK to die from coronavirus were all of BAME background, with many born overseas.

Dr Habib Naqvi, the NHS director for workforce race and equality, said: ‘The fact that a high number of black and minority ethnic staff are dying from this pandemic is a worry for us.’

Professor Chris Whitty, England’s chief medical officer, said: ‘It’s critical that we find out which groups are most at risk so we can help to protect them.’

Recently from Author
← Cheap Heartburn Medicine?Do Children Ever Transmit the Virus? →
Hide 116 CommentsLeave a Comment
"National Health Service: Now Race Does Exist, Nonwhites to be Prioritized for PPE"
• 116 Comments
Commenters to Ignore
Commenters to ignore (one per line)

Save ListCancel
Endorsed Only
Trim Comments?
• Replies: @Steve Sailer
@Mr McKennaBlacks with jobs tend to get human contact jobs involving face to face contact and conversation, rather than sitting quietly at a desk processing words and numbers on a screen. For example, blacks have tended to be heavily employed in parts of the transportation industry (such as airport workers) since the famous Pullman porters of the later 19th Century. Looking for public facing jobs is a perfectly reasonable cultural specialization in one type of honest work. At the moment, however, it's unluckier than focusing on work-from-homable jobs involving staring at a computer screen all day.As I may have mentioned, the current crisis is unfair in rather random ways.Replies: @Inverness
← Cheap Heartburn Medicine?Do Children Ever Transmit the Virus? →