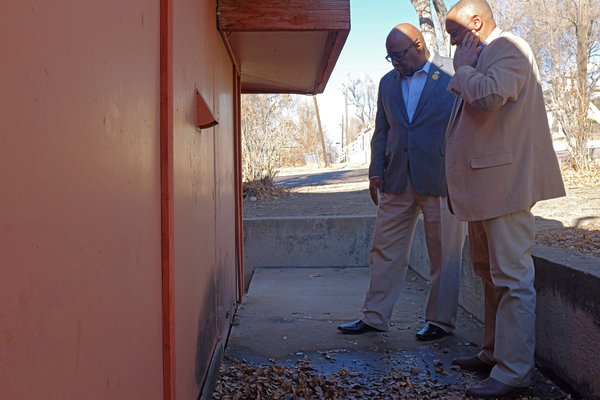 “Henry D. Allen Jr., president of the Colorado Springs chapter of the N.A.A.C.P., left, showed James Simmons, a fellow member, the site of the bombing on the side of the building.” Credit Matthew Staver for The New York Times

COLORADO SPRINGS â A shadow of char is the only remnant of an improvised bomb that exploded Tuesday outside the local offices of the N.A.A.C.P. here at the feet of the snow-covered Rocky Mountains, jolting the volunteers more accustomed to running membership drives and planning prayer breakfasts.

On Thursday, F.B.I. investigators continued trying to unravel the identity and motivation of whoever had set off the makeshift bomb Tuesday morning, a crime that authorities are investigating as a possible bias attack or case of domestic terrorism. …

The group has long been active in local civil-rights issues related to policing and education, and it held candlelit vigils for Trayvon Martin and Michael Brown, both of them African-American teenagers who were shot dead by white men. …

Amy E. Sanders, an F.B.I. spokeswoman in Denver, said it was still unclear whether the N.A.A.C.P. had been targeted, and said the agency was investigating âall possibilities for motive.â Law enforcement officials have said they are looking for a âperson of interestâ they described as a middle-age, balding white man driving a white pickup truck, but have said nothing else about their search for a suspect.

The F.B.I. said the improvised explosive was detonated at 10:45 a.m. Tuesday and had been placed next to a gasoline can, which did not ignite. No one was hurt, and the damage was limited to scorching on the outside of the building.

However, my commenter Babylonian Cultist alerted me that Jonathan Langdale pointed out to blogger John Cardillo that the scorch mark in the NYT’s photo (“a shadow of char”) was already there the last time Google Earth came through photographing the area. Cardillo wrote on Friday:

… Sources inside Denver PD informed me that members of the FBI’s Joint Terrorism Task Force were less than enthusiastic about handling the investigation, and that evidence was virtually non-existent.

My tweets were met with both approval and skepticism, with many not knowing what to believe.

Jonathan Langdale, (@jlangdale) web researcher and former USAF image analyst was the first to bring the Google Earth anomaly to my attention.

Google Earth indicates that the imagery of the building at 603 South El Paso Street, Colorado Springs, CO was last updated in September, 2014, a full four months before the alleged failed bombing.

A preliminary analysis of the Google Earth image side by side with the alleged damage seems to reveal similar scorching on the same area of the building months before the alleged hate crime.

Notice how the “crime scene” image has marks above the scorching consistent with the shape and height of the image on Google Earth.

I leave it up to you, the reader, to decide.

Following Langdale’s and Cardillo’s suggestion, I looked it up on Google Earth, and sure enough, back when there were green leaves on the bushes, there was a black smudge in the same spot: This Google Earth photo is pointed almost 180 degrees opposite of the NYT photo above. In the center you can see “scorch marks” that were already there before winter arrived.