From the Wisconsin State-Journal, keep reading for the poignant details:

A concrete slab remains where a stone and plaque memorializing the resting place of Confederate soldiers of the Civil War was removed from the Confederate Rest section of Forest Hill Cemetery on Wednesday.

One Confederate monument is gone and another is slated to be taken down at Forest Hill Cemetery after Madison Mayor Paul Soglin ordered their removal.

Soglin said in a statement Thursday that he directed city staff to remove a plaque and a larger stone monument at the Confederate Rest section of the public cemetery, saying, âThere should be no place in our country for bigotry, hatred or violence against those who seek to unite our communities and our country.â …

It described the 140 people buried there as âvaliant Confederate soldiersâ and âunsung heroes.â The privately funded plaque, which rested on a granite structure, said the soldiers were buried in the Union state after surrendering in a battle and dying at Camp Randall as prisoners of war.

… Despite best efforts, U.S. Army officials deemed camp conditions unsuitable. A May 1 letter written by Assistant Quartermaster J.A. Potter described the soldiers of the 19th Wisconsin as undisciplined, inexperienced and poorly-equipped to guard such a volume of prisoners. He expressed disappointment in hospital conditions, noting that of the roughly 1,200 prisoners held at Camp Randall, some 200 were hospitalized with illness.

The condition of these afflicted prisoners worsened. Despite medical care, more prisoners began to succumb to measles, mumps and pneumonia. A Private Paddock of the 19th Wisconsin Regiment wrote to his family regarding these deaths: âThey die off like rotten sheep. There was 11 die off yesterday and today, and there ainât a day but what there is from two to nine dies.â

Barely a month after their arrival at Camp Randall, the Confederate inmates had to relocate. … On May 31, 1862, the majority of the Camp Randall inmates left for Camp Douglas, a larger encampment in Chicago.

By June, the last of the Camp Randall prisoners had left. The only ones who still remain in Madison are 140 Confederate soldiers who died during their stay at Camp Randall, now interred at Confederate Rest.

Dead Confederate prisoners were buried at Forest Hill Cemetery. Initially grouped into a mass grave, the dead were later given their own headstones and a more formally organized plot, now known as Confederate Rest.

The plot is well-shaded and removed from the more populated areas of the cemetery, a quiet and somber reminder of an unsung chapter of Madison history.

Okay, so the Union managed to kill off in a month, via disorganization, over 10% of its Confederate POWs interned at Camp Randall. That’s likely a war crime, although a minor, unintentional one. (The American Civil War was, on the whole, relatively civil.)

Originally, those who died in Union captivity were dumped in a mass grave, but later were allowed to have their own individual graves, tombstones, and memorials.

But that kind of mercy and reconciliation is racist, so it’s gotta go.

Here’s a picture by William Cronon of how the two-foot tall memorial to the dead POWs looked:

And here is Ann Althouse’s photo of all that is left today: While Mayor Soglin couldn’t bring himself to let soldiers dead for 150+ years rest unmolested, he is a huge fan of at least one white man: 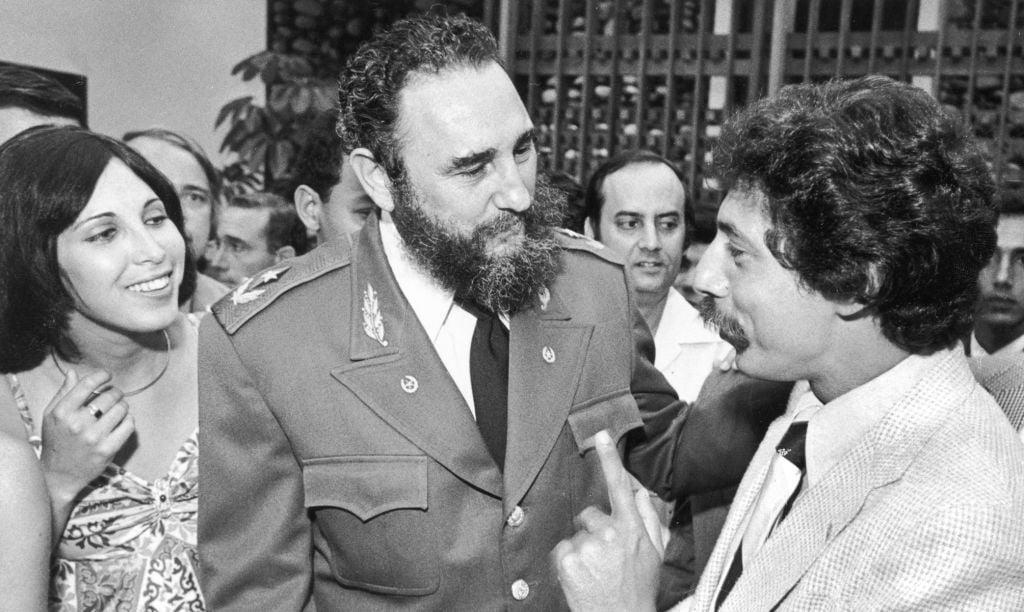 âItâs long overdue,â Soglin said of the thawing relations. … Soglin traveled to Cuba three times in the 1970s, meeting Castro on two of those trips.

âThereâs a contradiction,â Soglin said. âWe have this image of him giving forceful, eight-hour speeches. In person, heâs quiet, soft-spoken. He listens.â

By the way, I’m reminded of the current dispute between Poland and Russia over memorials to Soviet Red Army soldiers who died in Poland.

It’s been hard for American media to get a handle on this because the Who? Whom? issues are complex. Today’s Russians are Bad Guys. but their ancestors were punching Nazis in Poland in 1944. But in 1939 they and Nazis were teamed up punching Poles. But maybe the anti-Semitic Poles deserved punching? After all, today’s Poles are Bad Guys too for not taking in Merkel’s refugees. From Newsweek:

RUSSIAN SENATE WANTS TO PUNISH POLAND FOR REMOVING STATUES HONORING WORLD WAR II SOLDIERS
BY DAMIEN SHARKOV ON 7/25/17 AT 11:01 AM

Russian senators are calling on President Vladimir Putin to put sanctions on Poland for a law that could see Soviet memorials in the country torn down.

Polandâs new law demands the removal of dates, names and mentions on public monuments that seem to glorify Communism or âany other totalitarianâ regime. This mostly affects the many monuments built during Polandâs Cold War decades as a satellite state for the Soviet Union, and Russia has been particularly critical of the affect on memorials to Soviet soldiers who died fighting Nazism during World War II. …

The most emotive part of the issue for Russia officials seems to be the memory of around 600,000 Soviet soldiers who died in Poland during World War II. …

While in Russia the final Soviet siege of Nazi Berlin is annually marked with a huge celebration, Poles remember early Soviet action in World War II, focusing instead on the first year and a half of the conflict, when the Soviets and Nazis amicably split Polandâs territory between them. Moscow did not go to war with Nazi Germany until the German Wehrmacht mounted an attack on the Soviet Union.

This seems like a good time for a little statesmanship:

With malice toward none, with charity for all, with firmness in the right as God gives us to see the right, let us strive on to finish the work we are in, to bind up the nation’s wounds, to care for him who shall have borne the battle and for his widow and his orphan, to do all which may achieve and cherish a just and lasting peace among ourselves and with all nations.

But malice over events of 150+ years ago is currently running amok within the American Establishment.

It doesn’t have to be this way.