After almost twenty generations of intermarriage between whites and Indians, Mexico has ended up with an almost wholly white elite, a vast mixed race (mestizo) working class, and at least 10 million extremely impoverished pure Indians who have never assimilated into Hispanic culture. And the ruling class is becoming ever whiter. How did this happen?

Since then, I’ve gotten dozens of emails from Mexicans thanking me for helping them finally understand the basic mechanism of their social order:

… Now, in Mexico every century or so, there is a massive upheaval like the Revolution of 1910. The white monopoly is fractured. Up through the cracks come the most talented mestizos and Indians. They start dynasties that persist to this day â¦ but their grandsons and great-grandsons are notably whiter than they were, since the men of the family have been exploiting their social ascendancy to marry white women. (Of course, many rich Mexican men father second families with their lower-ranking mistresses. But these kids seldom get the breaks in life that the legitimate children do.)

I was thinking tonight that it would be fun to test whether this works for Latin America’s most famous nonwhite politician, Hugo Chavez, fire-breathing President of Venezuela, who portrays himself as the leader of the dusky masses against the white elite. Chavez is a “pardo” of mixed black, Amerindian, and European ancestry. He claims his family used to be big landowners, but had their estate confiscated in a 1920s political struggle. His parents were fairly poor schoolteachers in an obscure town.

ChÃ¡vez has been married twice. He first wedded Nancy Colmenares, a woman from a poor family originating in ChÃ¡vez’s own hometown of Sabaneta. ChÃ¡vez and Colmenares remained married for eighteen years, during which time they had three children: Rosa Virginia, MarÃ­a Gabriela, and Hugo Rafael. They separated soon after ChÃ¡vez’s 1992 coup attempt.

I can’t find a picture that specifically says its his first wife, but I’m guessing this is an old picture of Hugo with his first wife and two daughters by her. If that’s his first wife, she she was perhaps a little fairer than him, but not too different.

During his first marriage, ChÃ¡vez also had an affair with historian Herma Marksman; their relationship lasted nine years.[9][10]

Herma Marksman is a Venezuelan historian. Marksman was born of a peasant woman and a German immigrant who worked as an ironworker union organizer. When she was in her 30s she met the future Venezuelan president Hugo Chavez, who was then married and in his twenties. She became his mistress. They both were students of socialism and idealistic and she helped him in his academic studies. After the failed 1992 coup attempt Chavez left both his first wife and mistress.[1] Marksman now repudiates him, and describes his government as imposing a “fascist dictatorship.”

She’s a rather sour looking older woman, half German, but, presumably, he was attracted to her because she could teach him about the big picture topics that he’d need to discuss if he were to make a plausible Presidente.

But, when he became a celebrity with his failed, but rather popular 1992 coup attempt, Chavez dumped his peasant first wife and his smart but dowdy mistress and married a media personality:

ChÃ¡vez is divorced from his second wife, journalist Marisabel RodrÃ­guez de ChÃ¡vez.[11] Through that marriage, ChÃ¡vez had another daughter, RosinÃ©s.

No surprise here about his second wife’s looks. Judging from video footage of her, I’d guess she’s part Eastern European. Hugo’s ex-wife became a leader of the opposition in the 2008 election. 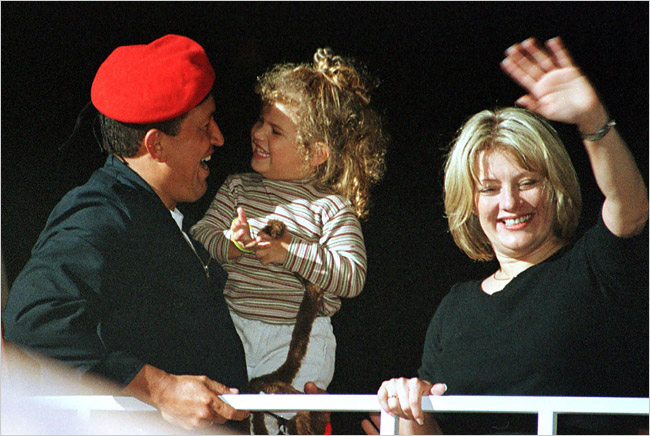 And here’s Chavez’s daughter by his second wife.
Who has replaced the second Mrs. Chavez appears to be obscure. Google Translate comes up with this version of a Spanish-language article in Petroleum World: “After his second divorce, amatory life of Hugo ChÃ¡vez has shielded beneath the mysterious mantle of power.” (He’s probably trying to get in touch with Amanda Seyfreid.)
So, Chavez Release 1.0 has three legitimate children who are just a little fairer than him, while Chavez Release 2.0 has, no surprise, one child who is blonde.

By the way, Venezuelan politics are awesome. For example, one of Chavez’s main political opponents is Leopoldo Lopez, mayor of Chacao, who recently ran ahead of Hugo in a poll for the 2012 election (assuming Hugo allows such a thing). He has the handsome but clueless good looks of a 1970s sit-com star, such as John Ritter. But who cares about what he looks like because here’s a picture of his wife, the potential First Lady of Venezuela, a famous kite-surfer named Lilian Tintori.

Save ListCancel
Endorsed Only
Trim Comments?
← The Middle East Debate in a NutshellThe Conventional Wisdom →