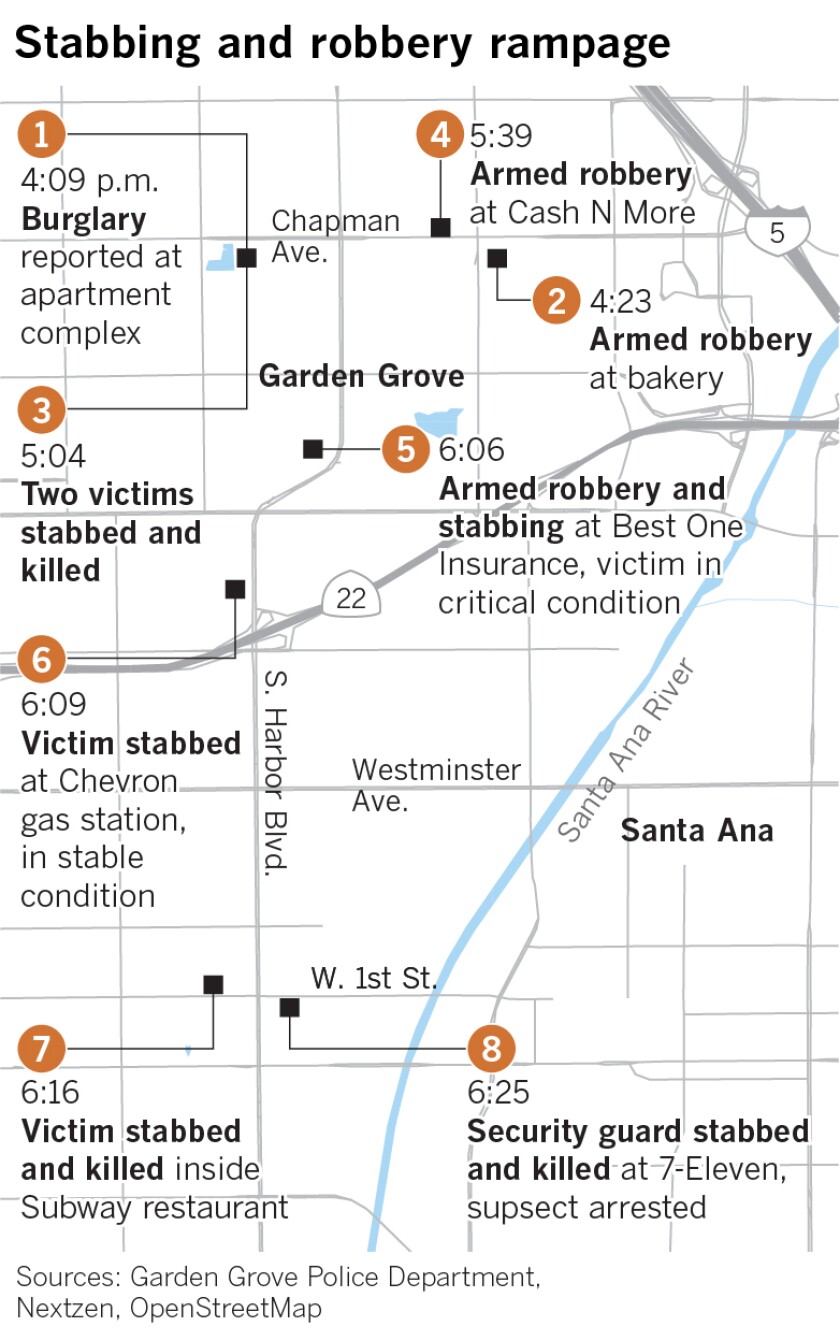 Authorities said the 33-year-old man accused of stabbing four people to death in a rampage across two Orange County cities is a known gang member with a criminal record dating back to 2004.

But detectives said they still were not sure why Zachary Castaneda allegedly went on the attack Wednesday, saying the violence appears to be random and that he didnât know those he targeted.

… Authorities said the attacks, which unfolded over a roughly 2Â½-hour period, begun as robberies and quickly turned deadly. Officials say there is no indication the attacks were racially motivated.

I believe most of the victims were also Latino.

Castaneda became violent with detectives who tried to interview him several times overnight, police said. He gave no hint about his motives, Whitney said.

âIâve been a police officer for 30 years, and this is the first time Iâve ever seen a suspect kill four people and stab others,â he said. âItâs pure evil.â

Castaneda has an extensive criminal history in Orange County that includes convictions for gun-related offenses, resisting a police officer, corporal injury, drug possession and theft. He also has several open cases in Orange County Superior Court on charges of vandalism related to gang activity, possession of a dagger and drug possession. He has pleaded not guilty to those charges, according to court records.

Just days before the rampage, Castanedaâs wife filed paperwork to move their divorce forward. The couple have three children, boys ages 7 and 12 and a teenage daughter….

Garden Grove Police Chief Tom DaRe said changes in California law â namely AB 109 â that aimed to reduce the number of inmates in the state prison system made it easy for Castaneda to carry out the crimes.

âThis person should have been in prison and not in our community,â DaRe said.

Friday, August 9th is the 5th anniversary of the beginning of the #TheFergusonEffect. As I pointed out in my Taki’s column this week, the Establishment’s embrace of the #BlackLivesMatter terrorist movement five years ago appears to have up homicides almost 25% nationally in Obama’s last 2 years:

Southern California, however, had largely been spared much of the Ferguson Effect that plagued the country as a whole during the Late Obama Age Collapse. In part, this is due to major innovations that began with the LAPD under the leadership of the great Bill Bratton (Giuliani’s first police chief) in the mid-2000s, according to ace crime reporter Sam Quinones.

SoCal law enforcement agencies rethought their traditional theory that the way to battle criminal gangs is by making a case to arrest the “kingpin,” who was presumed to be the Brains of the Operation. Decapitate the gang’s intellectual leader and its nefarious workings will fall into disarray!

But, it turns out, gangs don’t really need to be run by a Criminal Mastermind. There are lots of guys in the gang who have the 85 IQ or whatever it takes to be head honcho. Plus, the constant turnover at the top made joining a gang more attractive to a teen because of the opportunity for rapid advancement through the ranks.

Instead, the innovation was to use RICO (Racketeer-Influenced Corrupt Organization) indictments to round up the entire gang, including minor foot soldiers, in one single operation. And then … Mass Incarceration! For example:

Thus, in June 2008, three months into Bill Murphyâs tenure as a Captain III, thousands of police officers poured onto Drew Street and into nearby areas. SWAT teams from as far away as the East Coast came in to help. Seventy gang members were indicted.

Another innovation was to use the federal RICO indictment to send gang members not to California prisons, which are honeycombed with working gangs like the Mexican Mafia and where relatives and homies can easily visit to exchange operational information, but off to federal prisons a thousand miles or more from SoCal’s ethnic networks.

I suspect that one aspect of the Ferguson Effect nationally has been an opportunity cost one: rather than study and adopt the SoCal innovations over the last five years, police departments have instead been more inclined to hunker down and just try to keep the Eye of Soros off them.

But no good deed goes unpunished in 21st Century America, so California has recently adopted various anti-mass incarceration bad ideas that are slowly undoing the progress that had been made against crime since the Crack Wars of 30 years ago.

Save ListCancel
Endorsed Only
Trim Comments?
← Biden: "Poor Kids Are Just as Bright an...NYT: Ferguson Effect Not Real, of Cours... →