… Student leaders at Manchester University declared that Kipling âstands for the opposite of liberation, empowerment, and human rightsâ.

The poem, which had been painted on the wall of the studentsâ union building by an artist, was removed by students on Tuesday, in a bid to âreclaimâ history on behalf of those who have been âoppressedâ by âthe likes of Kiplingâ.

In lieu of Kiplingâs If, students used a black marker pen to write out the poem Still I Rise by Maya Angelou on the same stretch of wall. 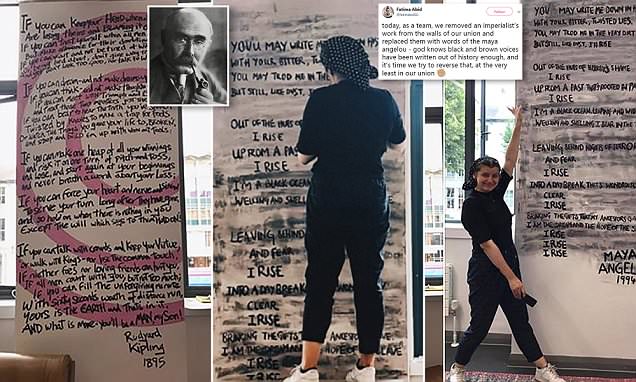 Does my sassiness upset you?
Why are you beset with gloom?
âCause I walk like I’ve got oil wells
Pumping in my living room.

Back to The Telegraph:

today, as a team, we removed an imperialistâs work from the walls of our union and replaced them with words of the maya angelou – god knows black and brown voices have been written out of history enough, and itâs time we try to reverse that, at the very least in our union â

Like I’ve said before, many people today feel oppressed by the greatness of past humans, especially if those humans didn’t happen to be their ancestors.

Kipling was one of those people of whom you should be proud to belong to the same species. He was perhaps, with Keats (who wrote “On First Looking Into Chapman’s Homer” at age 21) England’s greatest literary prodigy. He published “The Man Who Would Be King” and dozens of other short stories in 1888, his annus mirabilis when he was 22.

And while Keats was a lyric poet, a young man’s job, Kipling was mature before his time. “The Man Who Would Be King” provided the 69-year-old John Huston, who more or less invented film noir in his early 30s and perhaps Hollywood’s single most memorable personality, with the story that kicked off his impressive comeback in old age.

In a 1995 poll by the BBC, Kipling’s “If–” was voted the nation’s favorite poem by a two to one margin over Tennyson’s “The Lady of Shalott.”

As Bridget Jones noted, it’s like a self-help book in verse:

If you can keep your head when all about you
Are losing theirs and blaming it on you,
If you can trust yourself when all men doubt you,
But make allowance for their doubting too;
If you can wait and not be tired by waiting,
Or being lied about, donât deal in lies,
Or being hated, donât give way to hating,
And yet donât look too good, nor talk too wise:

If you can dreamâand not make dreams your master;
If you can thinkâand not make thoughts your aim;
If you can meet with Triumph and Disaster
And treat those two impostors just the same;
If you can bear to hear the truth youâve spoken
Twisted by knaves to make a trap for fools,
Or watch the things you gave your life to, broken,
And stoop and build âem up with worn-out tools:

If you can make one heap of all your winnings
And risk it on one turn of pitch-and-toss,
And lose, and start again at your beginnings
And never breathe a word about your loss;
If you can force your heart and nerve and sinew
To serve your turn long after they are gone,
And so hold on when there is nothing in you
Except the Will which says to them: âHold on!â

If you can talk with crowds and keep your virtue,
Or walk with Kingsânor lose the common touch,
If neither foes nor loving friends can hurt you,
If all men count with you, but none too much;
If you can fill the unforgiving minute
With sixty secondsâ worth of distance run,
Yours is the Earth and everything thatâs in it,
Andâwhich is moreâyouâll be a Man, my son!

Bridget found it inspirational rather than sexist. But that was back in the 1990s and much has changed since then.

Admittedly, because Kipling was a literary genius, his advice is so reasonable and even-handed in “If–” that it’s close to impossible.

Does my sexiness upset you?
Does it come as a surprise
That I dance like I’ve got diamonds
At the meeting of my thighs?