Since April 2014, I’ve been trying to revive the useful old word “adventuress,” which means a reasonably good-looking heterosexual woman who manipulates other people into all sorts of drama.

Some of 2014’s special brand of craziness — SterlingGate, GamerGate, and now the UVA RaperGate that exploded so jaw-droppingly this afternoon, etc. — revolves around fairly attractive women playing the Political Correctness card for their own complicated ends. It used to be that you could kind of tell that the feminist and other whoop-tee-doos were being pushed by women with palpable reasons for being discontent. 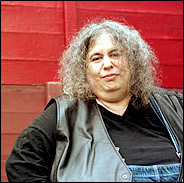 When Andrea Dworkin, for instance, announced in the Guardian and the Globe & Mail that in 1999 she’d been raped in her locked and deadbolted hotel room in Paris after the hotel staff conspired to put a date rape drug in her beverage, well, it got some publicity, but the alternative suggestion — Dworkin is obese and unhappy and not quite right in the head — also suggested itself pretty obviously. (Especially because feminists had pretty much put feminism on hold for the duration of the Administration of the Sexual Harasser-in-Chief Bill Clinton.)

But ever since the Obama Campaign/Administration revived feminism and other forms of victimism, something insidious has happened: adventuresses have come flocking to exploit it. I first noticed this in Silicon Valley, and then there was V. Stiviano. Now this UVA Jackie story of catfishing the boy that pretty much has handed Gillian Flynn her next ripped-from-the-headlines thriller novel ought to make the pattern obvious.

Attractive women tend to have fewer problems than unattractive ones, but when our society, starting with the White House, relentlessly encourages reasonably attractive women to proclaim themselves victims … watch out. People are hardwired to like and believe attractive young women, so it’s pretty easy to be an adventuress, and they can wreak a lot of havoc.

Recently from Author
← Jackie's Story: Going, Going, Gone Girl!Rolling Stone Vindicated! A Photo of th... →
Hide 62 CommentsLeave a Comment
"Jackie and the Return of the Adventuress"
• 62 Comments
Commenters to Ignore
Commenters to ignore (one per line)