Like so many incidents — going back at least to the Tawana Brawley hoax of the 1980s — that the national media decide to obsess over as case studies of White Racism in Action, the Ferguson, MO story is turning out to be a fiasco. 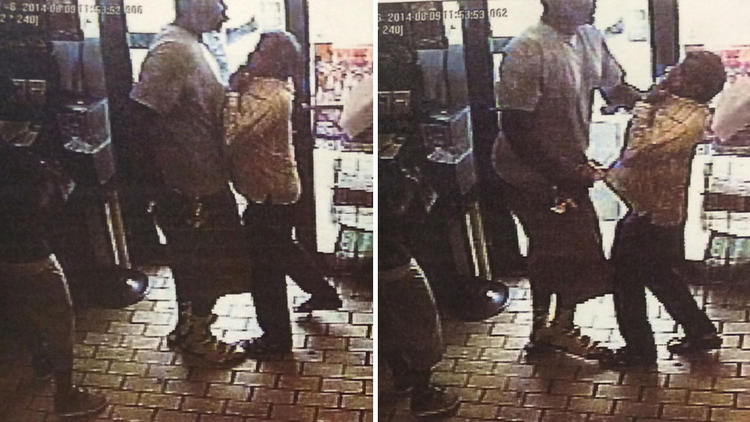 Apparently, the future shooting victim had just looted a convenience store a few minutes before a cop stopped him for walking down the middle of the street blocking traffic. So, probably unknown to the cop, the 6′-4″ 292 pound 18-year-old was feeling pugnacious and guilty and thus, likely, more volatile since he could get in more trouble than for just jaywalking if successfully apprehended. As it says in the King James Bible:

“The wicked flee when no man pursueth.”

Unfortunately, the cop didn’t know what the jaywalker was thinking, which exacerbated a tragically dangerous situation. As St. Louis blogger Countenance points out, we still don’t know what happened in the last three minutes of Michael Brown’s life, but we we do know a lot more about the previous ten.

Have you ever noticed how in election years, some local police blotter item that can be spun as supposedly proving a vast national crisis of white racist violence against innocent blacks seem to become the most important new event of the century for awhile? For example, in 2006 there was the Duke Lacrosse Case, in 2012 12-year old Trayvon Martin was wantonly gunned down by a white man from across the street, and in 2014 there’s Ferguson, MO, a place I have to admit to never having heard of before this month.

It’s almost as if the national media and the Democratic Party naturally work together to try to boost black turnout in November by stoking racial hatred against whites.

What’s particularly striking is what a low batting average America’s liberal elites have in choosing an incident to go to war over. America is a huge country and bad things happen all the time (here’s an incident in which I encouraged a slain teen’s mother to sue law enforcement: a judge eventually awarded the parents $3 million).

So you might think that just by random luck, the national press would manage to light upon a case that doesn’t unravel upon them. But they seldom seem to learn from all their previous travesties. In fact, conspicuously not learning anything is proof of moral and caste superiority.

It’s part of the class war of the High and the Low versus the Middle. In America today, markers of high status include being ostentatiously clueless about the kind of people who loot liquor stores and, indeed, in sacralizing liquor store looters. Thus, the stupider your thinking, the more refined your mind to be.

One telltale sign that it’s an election year is that data redolent of Blacks Behaving Badly gets brought up over and over in the press as simple-minded proof of White Racism. That’s because having a more sophisticated understanding of the implications of the numbers is just evidence that you are a White Racist.

(Reuters) – United Nations experts grilled U.S. officials on Wednesday about what they said was persistent racial discrimination against African-Americans and other minorities in jobs, housing, education and the criminal justice system.

“Stand Your Ground” laws, a controversial self-defense law in some 22 U.S. states, use of force by police against migrants, and FBI racial profiling were also raised by the U.N. Committee on the Elimination of Racial Discrimination (CERD).

The first review of the U.S. record since 2008, which continues on Thursday, happened to follow the fatal shooting of an unarmed black teenager in Missouri on Saturday and subsequent violent protests.

High levels of gun violence in the United States have a disparate impact on minorities, Noureddine Amir, committee vice chairman, told the talks.

African Americans make up 13 percent of the U.S. population, but 50 percent of homicide victims, he said.

“African American males are reportedly seven times more likely to die by firearm homicide than their white counterparts,” he said.

If you actually want to understand the homicide data, here’s my column on the most recent Obama Administration report of homicide figures.

“I understand that these disparities arise from factors such as subconscious racial bias in shootings, the proliferation of Stand Your Ground laws and the existence of predominantly African American and economically depressed neighborhoods with escalated levels of violence,” he said.

U.S. Ambassador Keith Harper, who led a 30-member delegation, said the multi-racial and multi-ethnic democracy had made “great strides toward eliminating racial discrimination”.

“Thirty years ago, the idea of having an African-American president would not have seemed possible. Today it is a reality,” Harper, a Native American of the Cherokee Nation, told the panel of 18 independent experts.

“While we have made visible progress that is reflected in the leadership of our society, we recognize that we have much left to do.”

… Sybrina Fulton, mother of Trayvon Martin, an unarmed black teen killed in Miami, Florida by a neighborhood watch volunteer in 2012, said in testimony to the panel on Tuesday that his killer considered Trayvon a threat because of his skin color.

Minorities and youth in particular are unfairly treated by U.S. law enforcement officials and the courts, Amir said.

I think a key to understanding the hidden logic behind the absurdity of the media mindset is that — for careerist purposes — self-humiliation isn’t a bug, it’s a feature.

This means that it’s difficult for a self-respecting writer to make a non-hand to mouth living in modern America, which is why I turn to you, my readers, four times per year for support.

I want to thank everybody who has contributed during the first two days of 2014’s second quarterly iSteve fundraiser.

I now have seven ways for you to send me money, including Paypal, Bitcoin, and fee-free bank transfers.

First: You can use PayPal (non-tax deductible) by going to the page on my old blog here. PayPal accepts most credit cards. Contributions can be either one-time only, monthly, or annual.

Third: You can make a tax deductible contribution to VDARE by clicking here. (Paypal and credit cards accepted, including recurring “subscription” donations.) If you send VDARE a check make sure to put “I like Steve Sailer” on the Memo line. Note: the VDARE site goes up and down on its own schedule, so if this link stops working, please let me know.

Fourth: You can use Bitcoin:

I’m using Coinbase as a sort of PayPal for Bitcoins.

The IRS has issued instructions regarding Bitcoins. I’m having Coinbase immediately turn all Bitcoins I receive into U.S. dollars and deposit them in my bank account. At the end of the year, Coinbase will presumably send me a 1099 form for filing my taxes.

Fifth: if you have a Chase bank account (or even other bank accounts), you can transfer money to me (with no fees) via Chase QuickPay (FAQ). Just tell Chase QuickPay to send the money to my ancient AOL email address (steveslrATaol.com — replace the AT with the usual @). If Chase asks for the name on my account, it’s StevenSailer with an n at the end of Steven. (Non-tax deductible.) There is no 2.9% fee like with PayPal or Google Wallet, so this is good for large contributions.

Sixth: if you have a Wells Fargo bank account, you can transfer money to me (with no fees) via Wells Fargo SurePay. Just tell WF SurePay to send the money to my ancient AOL email address steveslrAT aol.com — replace the AT with the usual @). (Non-tax deductible.) There is no 2.9% fee like with PayPal or Google Wallet, so this is good for large contributions.

Seventh: Google Wallet, which I’ll put below the fold:

Seventh: send money via the Paypal-like Google Wallet to my Gmail address (that’s isteveslrATgmail .com — replace the AT with a @). (Non-tax deductible.)

Or you can send money via credit card (Visa, MasterCard, AmEx, Discover) with the industry-standard 2.9% fee. (You don’t need to put money into your Google Wallet Balance to do this.)

Or, once you sign up with Google Wallet, you can simply send money via credit card, bank transfer, or Wallet Balance as an attachment from Google’s free Gmail email service.Here’s how to do it.