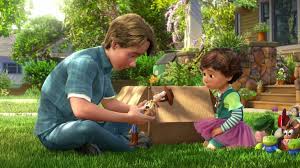 Pixar’s Toy Story 4 was one of the more disappointing movies released in 2019, not because it was bad, it was nice, but because Toy Story 3 had been a masterpiece. So hopes were high.

It’s not just near-absence of people of color in the Pixar film thatâs bothersome, itâs the absence of anything approximating life in America as most know it. …

Because in many ways TS4’s worldview seems like an Eisenhower-era fantasy, a vision of America that might have come from the most die-hard reactionary: lovely if youâre wealthy and white, but alarming if youâre black or brown or gay or a member of any other minority â in other words, more than half the U.S. population.

True, there are a few characters of color (including two supporting players voiced by Keegan-Michael Key and Jordan Peele); but each of the leads is Caucasian, and not just the franchise regulars but a host of new ones including a very white fork (Tony Hale) thatâs among the more memorable â and merchandisable â creations of this fourth iteration in the series. 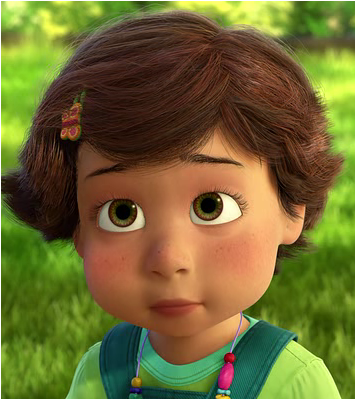 The main child in Toy Story 4, Bonnie, who is in more of the movie than Andy was in the previous 3 films, is vaguely Latina looking.

But, let’s face it, they don’t count. Look at her hair!

As Matthew Cherry, the African American director of animated short Hair Love, recently told The Hollywood Reporter: âWhen you donât see yourself represented and you donât see people with your same type of hair seen as the hero and seen as loving and desired, it really does a number on your self-confidence.â

Nor is it just the near-absence of people of color thatâs bothersome. Itâs the absence of anything approximating life in America as most of us know it.

TS4âs main family lives in a big, brightly lit house in an ivory utopia; its daughter sleeps in a plush room packed with a U.S. Treasuryâs worth of gizmos; they drive around in a gas-guzzling RV, stopping for carnivals and carnies that would be right at home in the 1940s or 1950s. Problems of prejudice, money and unemployment never seem to cross anyoneâs mind. …

At least Pixar knows it needs to change. Thatâs why in 2018 it launched the SparkShorts program, designed to foster diverse talent and stories â which has borne fruit with this yearâs Oscar-shortlisted Kitbull. Pixarâs next big release, Soul, centers on an African American musician,

… If youâre white and middle-class, as I am, if you drive a nice car and have a safe job, all this may seem moot. But not if youâre the five-year-old, African American girl a friend of mine recently adopted. I was about to give her Toy Story 4 but Iâve changed my mind. Because it sends the worst sort of message for a child like her: youâre an outsider, kept at a distance from everything fuzzy and fun in American life.

Perhaps by the time she sees Toy Story 5, whenever that is, weâll have moved on â weâll have reached the end of this make-believe homogeneity, this racism-by-exclusion thatâs no less pernicious than the real thing.