At age 28 in 1999, Peter Beinart was appointed editor-in-chief of The New Republic by Martin Peretz.

What entitled Peretz? Marty had married a woman who gave him the money to buy The New Republic. Marty had paid the cost to be the boss.

Beinart was merely the latest in a long line of bright young men Peretz had taken under his wing going back to a 17-year-old Al Gore at Harvard. From The Observer in 1999:

… Mr. Beinart is one in a long line of New Republic wonder boysâone of many Mr. Peretz has found over the years, from Michael Kinsley, who was 26 when he took over the magazine, to Mr. Sullivan, who was 28. One Wunderkind the magazine wants to forget is the onetime star writer Stephen Glass, who at 25 wrote colorful feature articles for the magazine that should have struck an editor as perhaps too colorful, given that they were fictitious. …

âIt would be damning with faint praise to say that heâs not one of Martyâs smart young men,â said Time columnist Margaret Carlson. …

But what exactly do the young men who have worn this title have in common? âIt has to be someone Marty respects, it has to be a guy, and he has to come from a good university,â said Hanna Rosin, a 29-year-old Washington Post reporter who interned with Mr. Beinart at The New Republic and is friends with him. âGiven all the requirements, heâs the best choice.â

With The New Republic in trouble retrospectively lately for Literary Editor Leo Wieseltier’s hands-on behavior and owner Marty Peretz’s hands-off behavior toward female employees, ex-golden boy editor Beinart has taken to the pages of The Atlantic to explain that it was all part of straight white males having too much power back in the bad old days. 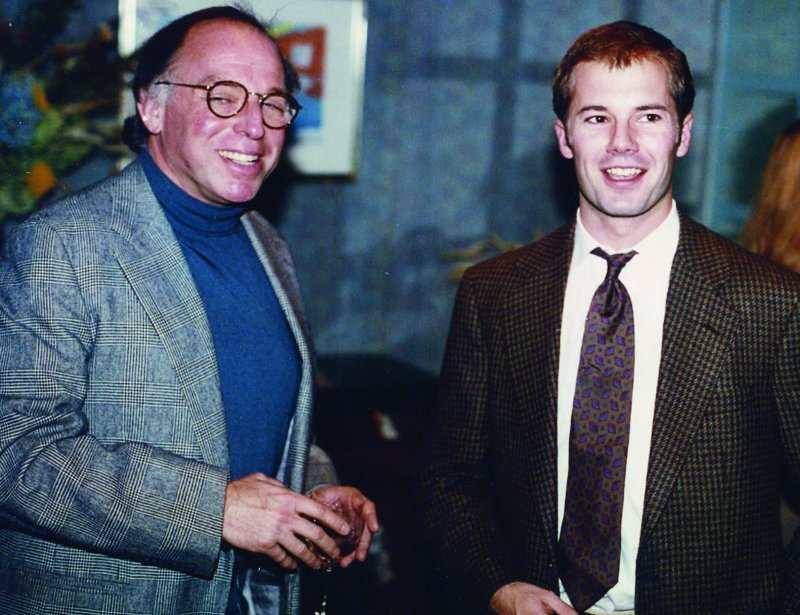 Beinart, who is married to a woman and has some kids, hints very vaguely in his Atlantic piece that Marty’s sexual preferences played a role in The New Republic’s “hothouse” office environment. But reading through the comments from poor, innocent Atlantic readers, only a few seem to have any clue of how how hilarious is Beinart framing how he benefited under Peretz’s biases as being like:

In the America of the 1950s, or even the 1980s, white, straight, native-born American men didnât worry as much about competing with Salvadoran immigrants and Chinese factory workers and professional women and Joshua-generation African Americans.

Peretz being one of those misogynistic Charles Kinbote-like gays who form mutual admiration societies with young men and who doesn’t think the female sex has much to offer was always one of those open secrets in the political and intellectual world.

As Benjamin Wallace-Wells wrote in New York magazine in 2010 in “Peretz in Exile” about (the genuinely Islamophobic) Marty retiring to Tel-Aviv as the Democratic Party became more Islamophilic during the Obama Years:

The New Republic also served another purpose. Peretz adores collecting people. Even early in his career, at Harvard, he had assiduously cultivated the role of mentor, and his friendships with younger men were sometimes so intense that they could seem to border on the erotic. âEvery so often, weâd talk about how he would sometimes grow obsessed with young men,â says one of his friends from that time. He had an equally fierce compulsion to promote them, and The New Republic soon became a platform to turn graduate students into public intellectuals. From Harvard he brought E.âJ. Dionne Jr., Kinsley, Hertzberg, Wieseltier, and Andrew Sullivan. His joy in their ascent was palpable: When he hired Hertzberg the second time, Peretz impulsively took him to his own tailor and paid for a bespoke suit.

But the public wasn’t supposed to know.

Why Won’t Anyone Tell You That Marty Peretz Is Gay?

Similarly, few of the Atlantic readers seem to understand the massive Jewish subtext to Beinart’s article.

How The New Republic Stopped Being a Jewish Magazine

When it was born a century ago, Jewish intellectual influence in America was on the rise. Now itâs starting to decline.

Last week, The New Republic, the magazine I used to edit, fell apart.

ousted the top two editors, most of the senior staff resigned, and while something called The New Republic will continue, it is unlikely to bear much relationship to the crusading, literary publication founded by Walter Lippmann and other progressive intellectuals 100 years ago.

Itâs an important moment for American Jews because for the last 40 years, The New Republic has been a culturally Jewish magazine.

Jews had always worked at TNR; Lippmann himself was an assimilated German Jew.

But in 1974, when Martin Peretz bought The New Republic, it came to reflect his very public Jewish identity.

TNR became a remarkable hybrid, only possible because of the extraordinary acceptance and privilege afforded to Jews in late 20th century America: an influential liberal political magazine that was explicitly informed by Jewish sensibilities and concerns.

The most obvious manifestation was the magazineâs coverage of Israel. Peretz was a fervent Zionist and made defending the Jewish state one of the magazineâs chief passions. But even when Peretz stepped down as editor in chief in 2010, TNRâs Jewish identity endured.

Under literary editor Leon Wieseltier, the magazine remained an indispensable source of commentary on Jewish history and culture.

And inside the magazine, yiddishkeit was rarely far away. I remember once hearing Wieseltier explain that he had asked an author to submit his book review by Rosh Hodesh. âThatâs how Malcolm Cowley used to do it,â he added wryly. The implication was clear. Cowley had been TNRâs literary editor in the 1930s, when American Jews were still outsiders. Now his successor was a graduate of Yeshivah of Flatbush. American Jews had arrived.

As a force in American journalism, we certainly have. Jews edit The New York Review of Books, The New Yorker, The Weekly Standard, The Atlantic, Foreign Affairs, Foreign Policy, Vox, Buzzfeed, Politico, and the opinion pages of The New York Times and Washington Post.

Of course, “white privilege” is a Thing. In contrast, there is no such Thing as “Jewish privilege.” It’s just not a concept that Americans can begin to process in their brains, even when discussing the history of The New Republic under Peretz and Wieseltier.

The funny thing is that The New Republic really was a pretty smart (if often absurd — e.g., Stephen Glass) magazine back when Marty was hiring based on what appeared to be his hunches of who might prove a worthy Alcibiades to his Socrates, just as Slate was smarter back when the editor was always a smart Jewish guy (Kinsley, Weisberg, Plotz) than it is now under a gentile woman.