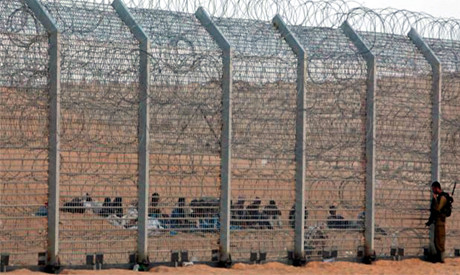 Another slow day at the Israeli border

Although Europeans are assured by their rulers that nothing can be done to stop the Camp of the Saints from inundating them, various countries very near Syria, such as the Persian Gulf Arab petrostates and Israel, find that ensuring self-rule over their demographic destinies is merely a matter of taking prudent precautions, such as building walls. From Haaretz today, an extremely calm analysis, as befits Israel’s strong border security situation, which is built not on geographic isolation, but on a proper understanding of the relationship between citizens and their state.

As Arab Migrants Swamp Europe, Israel Also Needs to Take Stock
Analysis | Israel is not impervious to the repercussions of the Middle Eastern refugee wave.

The picture of the tiny corpse of the 3-year-old Kurdish child that washed up on the beach in the hands of a Turkish policeman; the scenes of the thousands of refugees crowding into the Budapest train station requesting in vain permission to transit into Germany; the truck abandoned by the roadside in Austria and inside it the corpses of scores of people who had fled the horrors of the civil war in Syria â all these tell the same story: In the waning days of this summer the Middle East has come for a visit to Europe. And together with the refugees and survivors of the many crises and conflicts in Africa that barely get a small percentage of the international attention paid to the wars in the Arab world, it has no intention of going anywhere else.

It appears there is no longer any point in spreading apocalyptic scenarios along the lines of the plot of Michel Houellebecqâs novel âSubmission,â but it is already clear that things are never again going to be what they used to be. After nearly five years of atrocities, the huge upheaval in the Arab countries is no longer closed in a box, its external repercussions limited. Just as the slaughter that is happening daily in Syria and Iraq radiates onto the neighboring countries, among them Jordan, Turkey and Lebanon, which are inundated with waves of refugees, so hundreds and thousands more are fleeing to Europe, the promised continent. …

Within this huge uproar, most of the time Israel is continuing to maintain a kind of security bubble. The number of live-fire incidents along the borders has indeed increased somewhat, but it seems that the Israeli citizen hardly feels the repercussions of the upheaval all around him. All is quiet at the eye of the storm. …

The waves of refugees in the region, and alongside them the increased activity of the jihadist organizations along Israelâs borders, are expected to encourage Netanyahu to retrieve from the mothballs the old plan to surround the country with high fences and intelligence and surveillance systems. Possibly some of the tax collection surplus will be directed toward this aim.

The construction of the fence along the Egyptian border, which was completed more than two years ago, reflected an accurate strategic analysis on the prime ministerâs part. In the future he will want to accelerate construction of a fence along the Jordanian border. At this stage, the security establishment is preparing to build a fence only in the southernmost section of the border, along 30 kilometers from Eilat northwards, which will protect the new airport going up at Timna.

Though the Hashemite Kingdom of Jordan appears stable today, the concern for its future in the face of Islamic State pressures and the refugees necessitate broad attention by decision-makers in Israel. On the terror front, Israel is concerned about the movement of tens of thousands of Syrian refugees southward to work on farms on the Jordanian side of the Jordan Valley, for fear they will be infiltrated by terror activists.

Moreover, in recent weeks a new regional concern has cropped up: It turns out that three million citizens have fled from Yemen on the backdrop of the war that is raging there, and they are now moving northwards, to Saudi Arabia and thence perhaps also to Jordan. Possibly this trend will be depicted as another reason compelling accelerated closure of the Jordanian border in the near future.

It’s almost as if a strong, self-confident government can do what is in its voters’ best interests.

Recently from Author
← BBC: "Why Syrians Do Not Flee to Gulf S...EU Denounces Hungary & Bulgaria for... →
Hide 23 CommentsLeave a Comment
"Haaretz: "All Is Quiet at the Eye of the Storm.""
• 23 Comments
Commenters to Ignore
Commenters to ignore (one per line)

Save ListCancel
Endorsed Only
Trim Comments?
← BBC: "Why Syrians Do Not Flee to Gulf S...EU Denounces Hungary & Bulgaria for... →