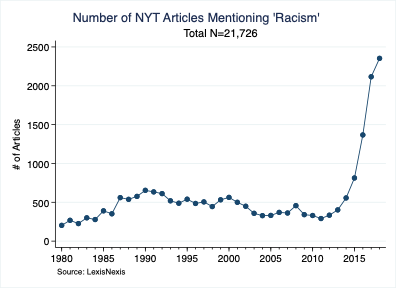 Zach Goldberg has been tweeting out a number of trend charts of media pushing over time various woke hobbyhorses. Unfortunately, it took him awhile to refine his methodology, so this is his best one yet. Here he is looking just at how many articles appeared in the New York Times in a year that mentioned the word “racism.” One peak was around 1990, which I remember well, and then the second is in this decade.

One problem is he doesn’t have a count of the total number of articles in the New York Times each year. 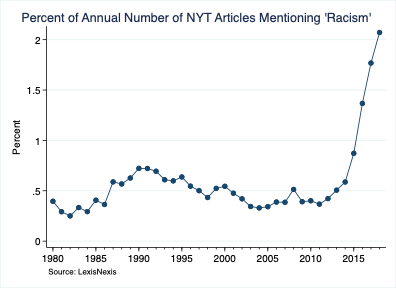 Something to keep in mind is that the NYT figured out a while ago that it could cheaply generate a lot of clickbait content without sending out expensive foreign correspondents to Rangoon or wherever. Instead, it could just pay its intersectional interns to generate cheap content in genres that they would obsess over for free anyway, like “The White Patriarchy Is Trying to Erase My Hair.”

Recently from Author
← Woodley of Menie on the Cognitive Archa...Sailer: "Ships of State" →
Hide 118 CommentsLeave a Comment
"Graphing the Great Awokening"
• 118 Comments
Commenters to Ignore
Commenters to ignore (one per line)

Save ListCancel
Endorsed Only
Trim Comments?
• Replies: @TWS
@HailYou started boring and ended long-winded.
, @res
@HailThanks for doing the analysis. I think it actually supports Goldberg's methodology being representative. The change in hits excluding comments was a bit larger on a percentage basis, and as you observed, the 2018 articles seemed "worse."
• Replies: @Redneck farmer
@HailIf they didn't do the clickbait stuff though, they'd have to write articles that would cause noticing.Replies: @Achmed E. Newman
, @Anon
@HailAs a sanity check, you could use Google search operators to get rid of comment noise (but you also get rid of article text occurrences}:inurl:racism OR intitle:racism daterange:[hyphen-separated Julian dates]See here for a Julian converter ...http://www.longpelaexpertise.com/toolsJulian.php... and know that Google doesn't always seem to obey daterange, and what they are looking at for daterange is unknown.Dates can also sometimes be teased out of URLs using "AND inurl:[date string]" for each element.At any rate the larger the sample size, the less important the noise becomes. That's why every large test is in effect an IQ test when applied to groups: the non-cognitive components are noise.Replies: @Hail
, @Jack D
@HailNotice that virtually all of the "racism" mentioned in the NYT falls into 3 categories: 1. Racism in the distant past
2. Racism in other countries
3. Racism in Current Year America that is utterly trivial or impossibly vague ("society is racist") - in the Dove soap ad (this "racist incident" really never got traction because it was so trivial and because Dove pulled the ad at the first complaint), a series of women pull their shirts over their heads and when they do, another woman is revealed beneath, Russian doll style thanks to the magic of CGI. Dove's mistake was that somewhere in this sequence a black woman pulled off her shirt and beneath was a white woman . This meant that a âdirtyâ black person has been cleansed into whiteness - RACIST.Once you exclude those 3 types of "racism" there are only a couple of articles left that deal with any sort of serious racism (or even allegations of serious racism) in America today.
← Woodley of Menie on the Cognitive Archa...Sailer: "Ships of State" →