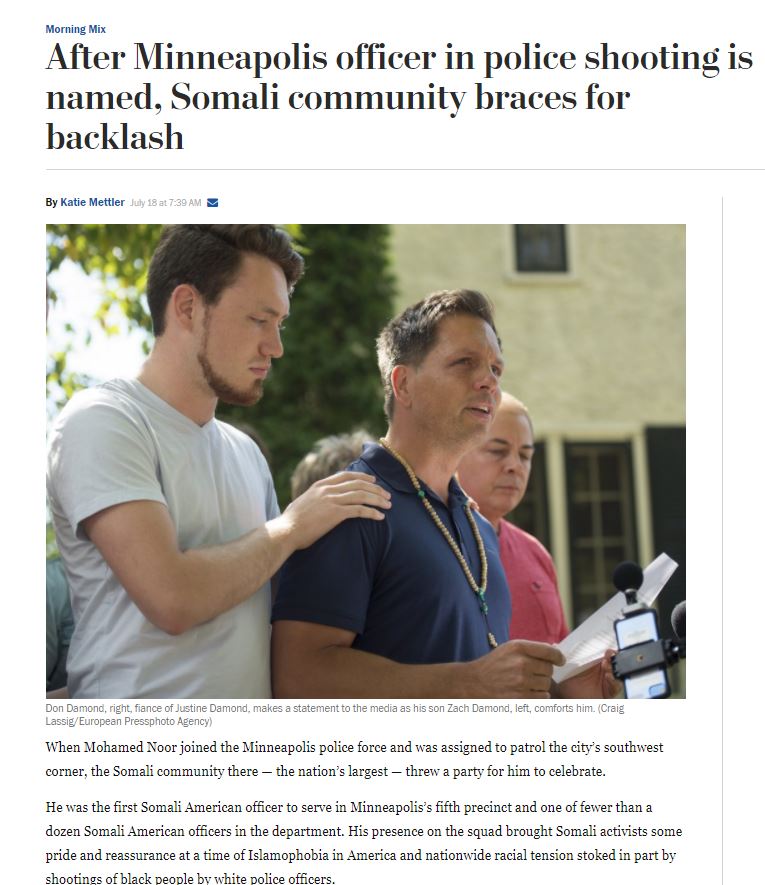 … The report stoked fear among Twin Cities Somalis, who have worked for decades to become part of the city’s fabric. There are now Somalis on the police force, the city council and in the Minnesota House of Representatives. But the largely Muslim population of Somali Americans in the Twin Cities region still face Islamophobia and innuendo about terrorism.

“They fear this will be just another event used to create animosity toward the Somali community,” Mohamud Noor, executive director at the Confederation of Somali Community in Minnesota, told The Post.

Already, hateful posts criticizing Islam and sharia law are filling social media in response to the police shooting. Several far-right blogs featured sensational headlines that blamed the officer’s ethnicity, not his training, for the deadly use of force.

Other Somali officers in the police department are “nervous,” Jamal said.

“They’re not talking at all,” he said. “You can feel the pressure, because you know, the difference now is ‘one of you guys did it.’

“The fact that the police involved in the shooting is Somali makes it a different matter,” he said.

Mohamud Noor, who is not related to the officer, is also a city council candidate. He and others in the Somali community have protested other police shootings in the Twin Cities region along with Black Lives Matter, but this one “changes the narrative,” he said. Usually, they are protesting the death of black men at the hands of police, he said. Now it is a white woman reportedly shot by a black officer.

He hopes the conversation will focus on police reform, not racial stereotypes.

Here are some other recent examples of media frontlash.

• Tags: Frontlash
Recently from Author
Related Pieces by Author
← Open Borders: Show Me the MoneyBBC: "Ghanaian Man with 100 Children Wa... →
Hide 183 CommentsLeave a Comment
"Frontlash from the Washington Post"
• 183 Comments
Commenters to Ignore
Commenters to ignore (one per line)

I am not a pagan, not a Wiccan, and not emoting.

LOL! Nice LARPing. I am in complete admiration, especially given your first statement.

Cucked and femmey religionists can go pound lubber sand up the orifice where you take invadersâ faiths and plead for more. The costs of your beliefs and of your admitted thirst for petty power as retainers to princes are visible to anyone who puts on the glasses.

Yeah, an atheists have been so wonderful on that front. Communism anyone? Millions dead and still counting. Not holding out that some dude who thinks he's just a sack of DNA is going to save society and the West.

But looking sharp on the perceived victimhood. You should go hang out with SJW feminists. I'm sure there's a cis-male Christian patriarchy you both can complain about. Maybe at a Starbucks?

Just one last thing. If you think the Wiccans are PC, you should sometime try a Sons of Norway or Knights of Columbus meeting.

You know I'm totally right about the whole pagan thing. And that's the problem.
← Open Borders: Show Me the MoneyBBC: "Ghanaian Man with 100 Children Wa... →