← SAS Airlines Instructs Scandinavians to...Based Bloomberg in 2008 on the Mortgage... →
TeasersiSteve Blog
TeasersiSteve Blog
Ezra Klein: Shhhhhh, Ixnay on How Demographic Change Is "a Force of Nonwhite People Who Are Coming and They Are Working as a Coalition to Overturn White People and Whiteness"
Steve Sailer • February 12, 2020
• 300 Words • 64 Comments • Reply

From my review in Taki’s Magazine of Ezra Klein’s new Why We’re Polarized:

The good news, according to Klein, is that âwhite Christiansâ are being demographically inundated in what Ezra calls the Browning of America.

The bad news, according to Ezra, is that some whites have started to notice the fate that is being prepared for them, and thus they voted for Trump. Klein says that the media should try harder to mislead white Christians about demographic change so that they donât see it coming until itâs too late for them to do anything about it:

As we navigate these sensitivities, we can do so with more or less care. [Jennifer] Richeson believes it would be wise for demographers to stop using terms like âmajority-minority Americaââafter all, whites will still be a plurality and what good can come of framing Americaâs trajectory in a way that leaves the single largest group feeling maximally threatened? It sounds like âa force of nonwhite people who are coming and they are working as a coalition to overturn white people and whiteness,â Richeson says. âThatâs a problem.â

Yet of course, as Ezra makes clear throughout his book, thatâs not just a problem, thatâs also the plan.

Ezra points out that if you simply lie to whites about what you are plotting, many of them will foolishly believe you:

Richesonâs research shows that if you can add reassurances to discussions of demographic changeâtelling people, for instance, that the shifts are unlikely to upend existing power or economic arrangementsâthe sense of threat, and the tilt toward racial and political conservatism, vanishes.

But, Klein and Professor Richeson conclude, with regret, you canât fool all the white Christians all the time:

The problem, she admits, is âwe canât say, âDonât worry, white people, youâll be okay and youâll get to run everything forever!ââ

Recently from Author
← SAS Airlines Instructs Scandinavians to...Based Bloomberg in 2008 on the Mortgage... →
Hide 64 CommentsLeave a Comment
"Ezra Klein: Shhhhhh, Ixnay on How Demographic Change Is "a Force of Nonwhite People Who Are Coming and They Are Working as a Coalition to Overturn White People and Whiteness""
• 64 Comments
Commenters to Ignore
Commenters to ignore (one per line) 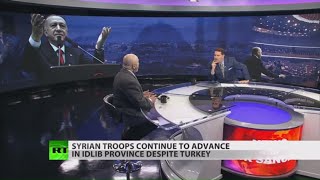