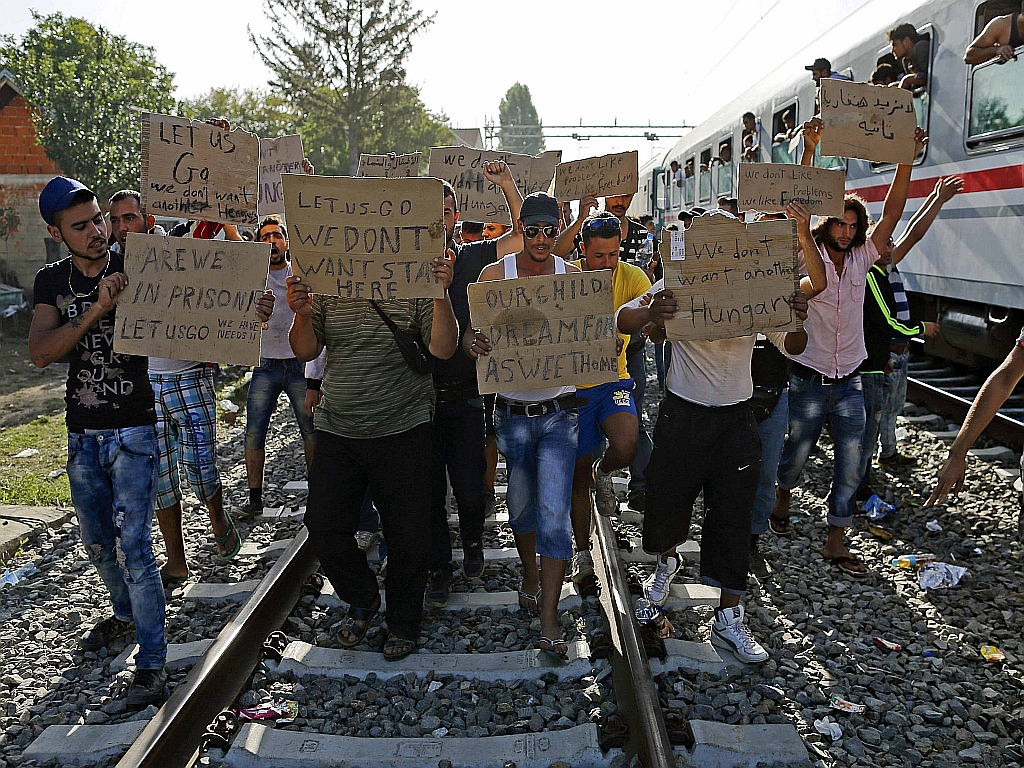 ZAGREB, Croatia â European nations once friendly to refugees abruptly yanked their welcome mats Thursday, as Germany considered slashing its benefits and Croatia announced it was closing most of its road links with Serbia âuntil further notice.â

The German measures would overhaul asylum codes to stem the massive flow of migrants into Europe, scaling back the generous policies that have made Germany a beacon for desperate war refugees and economic migrants pouring out of the Middle East, Africa and beyond.

In a 128-page draft law produced by the German Interior Ministry and obtained by The Washington Post, the government would speed asylum procedures, cut cash benefits, hasten deportations and punish those with false claims and phony paperwork.

The tough new measures, the draft bill states, are needed to cope with the huge influx of refugees into Germany, where 800,000 asylum applications were expected this year in a country with a population of 81 million.

In Croatia, meanwhile, leaders reversed themselves a day after they promised to greet asylum seekers with open arms â a greeting that stood in sharp contrast to a decision by neighboring Hungary to seal its frontier with razor wire and riot police.

Croatiaâs decision to close roads crossing into Serbia raised the risk of pushing asylum seekers into the areaâs fields and forests, which are littered with land mines from the Balkans wars in the 1990s.

The crush of refugees and migrants has shocked European leaders even as they struggle to find a common strategy to deal with their biggest humanitarian crisis in decades.

Here’s an idea for a strategy:

1. Perimeter defense: Keep the uninvited out of Europe and out of the EU

The proposed German law would provide food and a ticket to return to the first European Union country the asylum seeker entered, instead of housing and cash benefits. That could mean far fewer people would win protection in Germany or elsewhere in Europe, since countries such as Hungary are generally declining to award refugee status.

In addition, asylum seekers deemed to be withholding vital information â such as their passports or proof of their country of origin â would be denied benefits. Asylum seekers also would need to remain in crowded reception centers for six months, rather than three, before earning the right to subsidized housing.

Those who failed to comply with orders to leave Germany could be subject to forced removal without advance notice.

It was unclear whether the proposed German law, which must be approved by Parliament before it can take effect, would continue to make exceptions for Syrians fleeing civil war.

In announcing the closure of most roads into Serbia until further notice, the Croatian Interior Ministry said late Thursday that it took the step after more than 11,000 people arrived in a 24-hour period.

âDonât come anymore here. Our capacities are full,â Croatian Interior Minister Ranko Ostojic said earlier in English near his nationâs border with Serbia. âIf you want to save your life, please go to reception centers in Serbia or Macedonia or Greece.

âAnyone who is sending a message that this is an open door for the European Union, and that they can go to Germany and Slovenia .â.â. itâs a lie,â he said.

Croatiaâs president, Kolinda Grabar-Kitarovic, asked her nationâs military to be ready to defend the border if necessary.

Croatiaâs reversal came after hundreds of asylum seekers scuffled with Croatian riot police at the Tovarnik rail station near the Serbian border after waiting for hours in the late-summer heat with little food and water. …

On Thursday, one of the officials who helped spark the onslaught resigned. Germanyâs top migration official, Manfred Schmidt, stepped down for âpersonal reasonsâ less than a month after his agency posted a message on Twitter that had far-reaching consequences.

The announcement that Germany would no longer deport Syrian asylum seekers to the E.U. country they entered â often Greece or Italy â helped fuel fresh waves of refugees who saw Germany as opening its arms.

With Europe bitterly divided, bigger and richer countries are increasingly lashing out at poorer partners that have refused to take in many people.

âGermany is helping. The question is, who is helping Germany?â German Vice Chancellor Sigmar Gabriel asked in a video released Thursday.

You know, Germany, you are supposed to be in a Union with other Europeans. If you choose to betray Europeans for the denizens of other continents, it’s a little rich to act like you are upholding European unity.

He accused other countries of taking E.U. money, then âhiding in the bushes when they have to take responsibility.â

Hungary has so far taken the harshest measures to block the refugee tide, using tear gas, pepper spray and water cannons Wednesday to repel a crowd of migrants who threw stones and debris at police along the border fence.

[Europe asks: Why no mention of refuÂ­gee crisis in GOP debate?]

âWe donât like the fence,â the Hungarian governmentâs chief spokesman, Zoltan Kovacs, said Thursday. âBut it seems to be working to protect the countryâs borders, to stop illegal migration. Obviously, we are going to continue with that: keeping the fence, protecting the fence by police.â …

Hungarian authorities said the number of people crossing into their nation had all but dried up: 277 Wednesday, down from 9,380 Monday. Some of the few asylum seekers on Wednesday who made it into Hungary said that their applications were summarily denied and they were sent back into Serbia.

By Thursday, the camp along the Serbian-Hungarian border was quickly emptying as asylum seekers paid 20 euros apiece to get on buses that were ferrying them to the Croatian border.

So far the Serbs have been trying to be the perfect EU candidates, passing along the Muslims with a smile. Now, though, the Serbs are asking the EU powerbrokers: Please tell us what European Values means you want us to do. If you want us to help the Muslims along, we’ll do that. But if you want us to be not nice, please spell it out for us, we’re not that clever. We’re just poor dumb tough Serbs.

Maybe the endgame is that the Germans and Austrians are setting the Serbs up to be the Fall Guys for Merkel’s Boner. Payback for 6/28/1914 and all that. Maybe ultimately, the Serbs are going to have to go all 1389 on Merkel’s Muslim invaders, and then the Austrians and Germans can gasp and fan themselves and blame it all on the backwards Serbs and set back Serbia’s EU application by decades, while inwardly thanking fate that they dodged this idiotic bullet they shot at themselves.

Recently from Author
← All I Wanna Do: Non-Paper PlanesNYT Editorial Board and a Furious Holy ... →
Hide 148 CommentsLeave a Comment
""E.U. Nations Pull Welcome Mats for Migrants""
• 148 Comments
Commenters to Ignore
Commenters to ignore (one per line)

Save ListCancel
Endorsed Only
Trim Comments?
← All I Wanna Do: Non-Paper PlanesNYT Editorial Board and a Furious Holy ... →