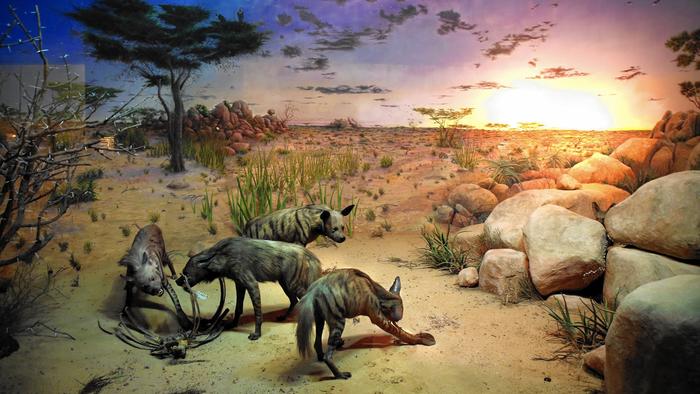 Since the BBC published an article in 2013 entitled “Where Hyenas Are Used to Treat Mental Illness,” it has been widely reported that in Somalia, families rent hyenas to lock in a room overnight with their insane loved ones.

I’ve been able to track this idea back six years earlier in time, including a 2011 Toronto Globe & Mail article, 2010 World Health Organization report, and a 2007 Chicago Tribune story.

But, most of the articles about the “hyena cure” feature an expert source called “Dr. Habeb,” an entrepreneur who runs a widely-advertised chain of lunatic asylums in Somalia. Dr. Habeb (he actually only is a nurse) is clearly your go-to guy for a punchy quote about how bad mental health care is in Somalia. (It’s bad. Also, according to Dr. Habeb, so is mental health in Somalia. There appears to be a lot of insanity, whether PTSD from all the violence, or from all the khat-chewing, or maybe it’s a culturally-sanctioned way to act out.)

Hyenas look sort of like dogs (although much less so than jackals), but they are more closely related to the mongoose. They are famous for being sexually obscure and having dominant females. (Thus, in The Lion King, the male hyenas, voiced by Cheech Marin and Jim Cummings, are subordinate to Whoopi Goldberg.)

The idea that hyenas and insanity are somehow related has been around for a long time. Gericault painted a portrait in 1822 entitled The Madwoman (a.k.a., The Hyena of Saltpetiere).

A teenage Rimbaud (the namesake of Sylvester Stallone’s Rambo) published a poem in 1872 entitled “A Season in Hell” about, I think, insanity:

âYouâre a hyena still…â the demon cries who crowned me with such delightful poppies.

A hyena hole in Harar

Rimbaud later moved from hyena-free Europe to the hyena capital of Harar, a walled Muslim city in Ethiopia near the Somalia border. Harar is famous for having “hyena holes” in the town wall to let hyenas in at night to scavenge domestic animals who drop dead in the streets.

Australian anthropologist Marcus Baynes-Rock, author of the recent book, Among the Bone Eaters, spent over a year following the hyena scavengers around Harar. Baynes-Rock explains the logic. From his dissertation:

In general, hyenas are not well liked. Indeed, hyenas are usually feared, loathed, vilified, derided, persecuted and where people have the means, eradicated. Often, hyenas are associated with what are called witches (Johnstone 1902, p. 265; Morris 2000, p. 168).

Hyenas’ nocturnal habits, human-like giggles and propensity to exhume and consume human corpses makes them obvious companions to people exercising supernatural means to malevolent ends (Gray 1963, p. 167). Often the hyenas do the bidding of the witches, bringing home fresh human meat, or else they are ridden through the night sky, with flames shooting from their anuses (Beidelman 1963, p. 65; 1975, p. 190; Gray 1963, p. 166). In many countries, witches are believed to transform into hyenas and prowl around at night looking for victims to eat (Niehaus 1995, p. 514; Rutherford 1999, p. 95; Sapir 1981, p. 533).

On the other hand, the urbanites of Harar are more pro-hyena than most Africans. Baynes-Rock has a website aimed at schoolchildren, presumably including fans of the secondary bad guys in “The Lion King,” on which he explains:

But it is not simply a matter of hyenas refraining from attacking people and getting food scraps in return. The other service that hyenas perform is to clear the town of bad jinn [a.k.a., genies]. These unseen spirits enter the town through the same holes that the hyenas use and are a constant threat to the people of Harar. I myself have heard many stories of jinn possession and met with someone who was possessed by multiple jinn. Hyenas for their part, can see jinn and they attack them whenever they get the chance. The jinni runs in fear from the hyena and enters the ground but the hyena puts its nose to the ground at that place and sucks the jinni from the earth and into its stomach where it perishes. This is when the hyena makes an oowoop noise. Hararis tell me that after a hyena eats a jinni, it will vomit up hair, fingernails and even precious stones. If you manage to find a hyena cave youâll find these precious stones.

From WBUR, the NPR station in Boston:

Baynes-Rock knew of cases in which psychologically unbalanced people were brought to the hyenas in hopes of some kind of exorcism.

So, it’s not just Dr. Habeb making up the Hyena Cure.

Recently from Author
← Somalia: "Where Hyenas Are Used to Trea...Olympics Open Thread →
Hide 60 CommentsLeave a Comment
"Do Somalis Really Lock Crazy People in Rooms with Hyenas?"
• 60 Comments
Commenters to Ignore
Commenters to ignore (one per line)

Save ListCancel
Endorsed Only
Trim Comments?
← Somalia: "Where Hyenas Are Used to Trea...Olympics Open Thread →