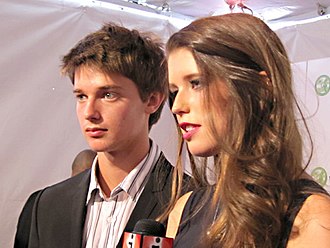 We are often told that “races” do not exist because Reasons.

But lots of things are hard to pin down precisely. For example, “extended families” clearly exist, but how far do they extend?

Are the siblings shown above, Patrick & Katherine Schwarzenegger, members of the Kennedy family? They bear the surname of their father, the former Governor of California. Their mother is Marina Shriver, whose father Sargent Shriver wound up being the Democrats’ VP nominee in 1972. Their maternal grandmother Eunice’s maiden name was Kennedy.

Interestingly, Wikipedia identifies both of them as members of the Kennedy family:

Katherine Eunice Schwarzenegger[1] (born December 13, 1989)[1] is an American author and the oldest daughter of actor/politician Arnold Schwarzenegger and broadcast journalist Maria Shriver. A member of the Kennedy family, Schwarzenegger is a great-niece of John F. Kennedy, the 35th President of the United States.

I don’t have a strong opinion on whether the latest Schwarzeneggers are Kennedys or not. (It could be that Wikipedia wouldn’t call them Kennedys if they were ugly.)

But I can live with this ambiguity without it calling into question the entire existence of the concept of an extended family.

Recently from Author
← Affirmative Action in BrazilFinancial Racism →
Hide 72 CommentsLeave a Comment
"Do "Kennedys" Exist?"
• 72 Comments
Commenters to Ignore
Commenters to ignore (one per line)