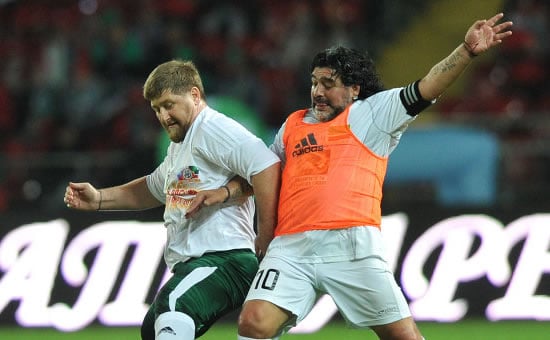 The greatest soccer player of the 1980s, Argentina’s hero Diego Maradona, has died at age 60.

A question I’ve always had is whether the 5’5″ Maradona was part-Amerindian.

Argentina isn’t as mestizo of a country as Mexico. But it’s more mestizo than you might think from the most famous Argentines, such as Evita Peron, Lionel Messi, the Pope, and Jorge Luis Borges.

Che Guevara liked to say that Argentines were a mestizo nation.

But he was half-Irish and looked rather like a third Sheen-Estevez brother.

In contrast, if you’d said Maradona was actually Mexican, I’d believe you.

Above is a picture of him playing against Chechen strongman Ramzan Kadyrov.

Here he is matching up in an exhibition against the notoriously short Italo-Argentine Messi.

Outside of boxing, there haven’t been many great mestizo athletes, but a few, such as Fernando Valenzuela and perhaps Maradona, have been wildly popular.

The idea that you can fight your way to the top despite a less than perfect athletic body is appealing.

Much of the appeal of soccer lies in two attributes: you don’t need to be tall, and that it’s not like baseball with its tedious statistics. Instead, it’s more like Beowulf. A soccer player can be summed up in a few endlessly retold highlights.

For Maradona, it was two goals, one crooked, one phenomenally legit, in 4 minutes to beat England, the victor in Falklands War four years before, in the quarter-finals on the way to Argentina’s 1986 World Cup:

Recently from Author
← Can Corporate Wokeness be Robotized?Angela Davis, One More Time →
Hide 241 CommentsLeave a Comment
"Diego Maradona, RIP"
• 241 Comments
Commenters to Ignore
Commenters to ignore (one per line)

Save ListCancel
Endorsed Only
Trim Comments?
• Replies: @tyrone
@Bardon KaldianWell , after all they are the real Caucasiansâ¦â¦.and of course Ramzan is the Steve-o-spheres favorite Chechen. It's nice to see someone enjoying life.
← Can Corporate Wokeness be Robotized?Angela Davis, One More Time →