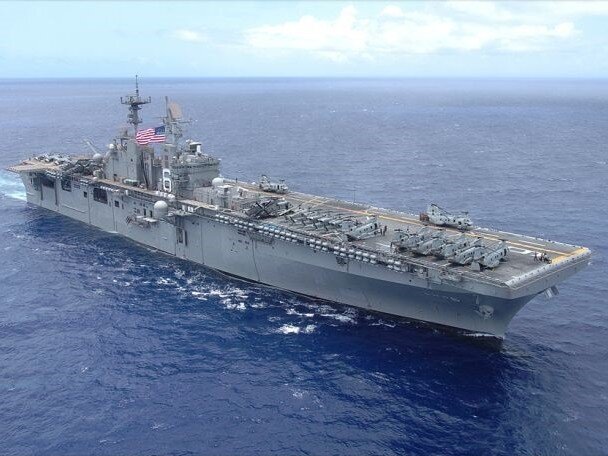 The Navy has decided to scrap the USS Bonhomme Richard, the amphibious assault ship that caught fire over the summer in San Diego, officials announced Monday.

Navy Secretary Kenneth Braithwaite said the decision was made after officials determined the damage was too extensive and the cost of repair too high to justify salvaging the vessel. …

The fire broke out July 12 and took four days to extinguish. The ship, which works to deploy elements of Marine landing forces, was based at Naval Base San Diego after having spent six years in Japan.

Investigators believe the fire may have been intentionally set but the Navy has yet to formally declare it a case of arson.

An unidentified sailor is the focus of the investigation of the suspected arson, which, perhaps coincidentally, took place around the height of the BLM/Antifa Mostly Peaceful Protests. On the other hand, the USS Miami was burned beyond repair in 2012 by a dockworker wanting to get off work.

The damage caused by the fire was extensive. âProbably 60% of the ship would require replacement,â including the mast, island, and the levels directly below the flight deck, said Rear Admiral Eric Ver Hage, the commander of Navy Regional Maintenance Center.

Following an extensive review, the Navy concluded that rebuilding the ship would cost more than $3 billion and take between five and seven years to complete.

Recently from Author
← I Want to Doze Off in the City That Alw...The Continuing Crisis: Too Few Plaques ... →
Hide 213 CommentsLeave a Comment
"Did the US Navy Lose a Light Aircraft Carrier to Attack in 2020?"
• 213 Comments
Commenters to Ignore
Commenters to ignore (one per line)

• Thanks: bomag
• LOL: YetAnotherAnon
• Replies: @Hibernian, @AndrewR
← I Want to Doze Off in the City That Alw...The Continuing Crisis: Too Few Plaques ... →
Current Commenter
says:
Current Date at Time Now
Leave a Reply - Comments are moderated by iSteve, at whim.
Cancel Reply