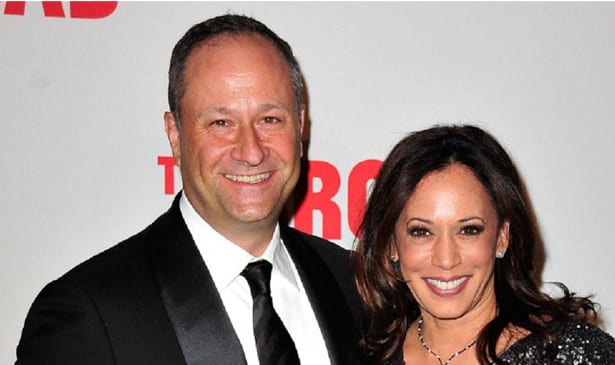 I’d like to see a debate on racial school busing between Senator Kamala Harris and her mother-in-law, Mrs. Emhoff. I could imagine it going like this:

Sen. Harris: “Being bused in Berkeley was great for me.”

Mrs. Emhoff: “Bus little Dougie to Watts? Are you crazy? Of course we moved to Agoura where there was no busing.”

My final observation from looking through Reardonâs trove of data is that it will be hard for ambitious politicians like [Kamala] Harris to hunt down enough white kids to bus to black and brown schools to make any kind of difference. There just arenât many centrally located school districts left in America with large numbers of white students.

Due to busing, crime, and the like since the 1960s, America now has a white family diaspora.

For example, Los Angeles public schools used to have a huge number of high-IQ Ashkenazi Jewish students in its San Fernando Valley. But racial busing in the late 1970s put Jewish students to flight: to newly formed private Jewish schools; over a second mountain range to the Las Virgenes school district; or all the way to Portland. During a Harris administration, rounding up their descendants to bus them to South-Central would be even harder than in 1979.

Today it occurred to me that one example of a Jewish teenager whose family moved to the Las Virgenes school district around the time that busing was imposed on the Los Angeles school district in the late 1970s might well be … Mr. Kamala Harris himself, lawyer Douglas Emhoff.

Kamala’s husband is a high-powered business litigator, West Coast head for DLA Piper. Emhoff, who was born in 1965, is a 1987 graduate of Cal State Northridge in the San Fernando Valley, and a 1990 graduate of USC law school.

And sure enough … From a 2019 article in the Hollywood Reporter:

Meanwhile, Emhoff, 54, has continued to build an entertainment litigation practice representing studios and streamers in everything from copyright disputes to contract issues and antitrust matters. He joined DLA Piper from Venable in 2017 and now splits his time between Washington, D.C., and L.A., where he’s lived since high school. (Emhoff was born in Brooklyn âbefore it was cool” and moved to SoCal as a teen.) The Agoura High alum says he wanted to be a lawyer as a kid and the dream stuck.

Agoura HS is the largest high school of the Las Virgenes school district.

In his defense, he might argue (and Emhoff is very good at arguing — I was talking to a lawyer at the gym recently and Emhoff’s name came up and this lawyer was lavish in his praise of Emhoff’s skills) that perhaps his family moved directly from the New York area to the Las Virgenes school district without touching down in the Los Angeles school district.

But Emhoff didn’t become a teenager until late 1978, the year after busing was ordered for Los Angeles, so it’s quite likely that his parents were monitoring the L.A. busing question and that it’s not a coincidence that they picked the prime white-flight destination of Agoura, just outside the vast and busing-plagued Los Angeles Unified School District.

In general, the vast exodus of Jews from the Los Angeles public school system at the end of the 1970s is not well remembered. But it was a huge deal at the time four decades ago.

LOS ANGELES, Oct. 10 â After more than a decade of legal battles over integration the nation’s second largest school system is edging toward mandatory busing for thousands of children via the freeways of this farâflung city.

But even as it does so the system is continuing to [bleed?] the white enrollment it needs to achieve a racial balance in schools with large nonwhite and Hispanic enrollments.

Suburban real estate brokers report that an influx of home buyers who leave Los Angeles say that they want to avoid courtâordered busing. Private schools report increased applications. And this fall, for the first time, white students are a minority in the sprawling, 710âsquare mile Los Angeles school system….

An integration plan submitted by the Board of Education last week to Judge Paul Egly of the Superior Court called. for the mandatory busing of 55,000 fourth through eighthâgrade students beginning next fall, and 112,000 the following year. The goal is to have a maximum oneâway commute of 45 minutes, although some students would face longer trips.

The Los Angeles Unified School District spans both much of the urban Los Angeles basin and much of the suburban San Fernando Valley north of the Santa Monica Mountains. Busing white kids over the Hollywood Hills on the 405 freeway and 101 freeways to integrate South-Central schools was one of the more, shall we say, heroic conceptions in the history of school busing.

… parents organizations have attacked it as being impractical and a cruelty to children to be subjected to such longâhaul commuting away from their neighborhoods. … School officials argued that the distances were too far and that too few whites are available to integrate many neighborhood schools. schools.

A different conclusion was reached in a study for the school district made by Dr. David Armor of the Rand Corporation and Dr. Howard Freeman, director of the Institute for Social Science Research at the University of California, Los Angeles.

Based on an opinion survey they determined that up to 58,000 white pupils, or about 35,000 families, would leave the district by 1980 if mandatory busing takes effect. Such a loss would be in addition to an expected decline of 60,000 white students that would result from a lower birth rate and a normal flow of white families to the suburbs.

âIt’s not integration; it’s busing that is behind their attitudes,â Dr. Freeman said. âAnd it’s not only whites. There was a significant percentage of Mexican Americans, and some blacks, who were opposed to mandatory busing.â …

A preliminary enrollment count last month indicated that the proportion of whites had dropped this year, from 37 percent to 35.2 percent. MexicanâAmerican students, at 35.3 percent, were the largest ethnic group, followed by blacks, at 22.5 percent.

Here’s Emhoff coming to his wife’s assistance when some animal rights protester grabbed the microphone from her. He’s the angry-looking man in the dark brown suit at the end propelling the protester offstage. Good for him.

Recently from Author
← Busing Is Back, But White Kids Aren'tHonor Codes: What Would Robert E. Lee Do? →
Hide 153 CommentsLeave a Comment
"Did Mr. Kamala Harris, Douglas Emhoff, White-Flight to Avoid Busing?"
• 153 Comments
Commenters to Ignore
Commenters to ignore (one per line)

Save ListCancel
Endorsed Only
Trim Comments?
← Busing Is Back, But White Kids Aren'tHonor Codes: What Would Robert E. Lee Do? →