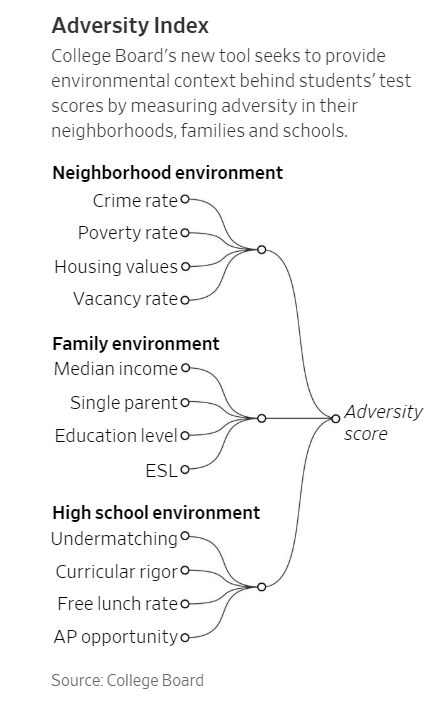 Scoring patterns on the SAT suggesting that the test puts certain racial and economic groups at a disadvantage have become a concern for colleges.

The College Board, the company that administers the SAT exam taken by about two million students a year, will for the first time assess students not just on their math and verbal skills, but also on their educational and socioeconomic backgrounds, entering a fraught battle over the fairness of high-stakes testing.

The company announced on Thursday that it will include a new rating, which is widely being referred to as an âadversity score,â of between 1 and 100 on studentsâ test results. An average score is 50, and higher numbers mean more disadvantage. The score will be calculated using 15 factors, including the relative quality of the studentâs high school and the crime rate and poverty level of the studentâs neighborhood.

The USA’s College Board is introducing an Adversity Score that’s like a mirror image of China’s new Social Credit score: but in America, the more your family is messed up, the more points you score!

Remember, we always get more of what we measure and incentivize. So, if we reward parents with high Social Detriment scores, we’ll given them an excuse for being bad parents.

The rating will not affect studentsâ test scores, and will be reported only to college admissions officials as part of a larger package of data on each test taker.

The new measurement brings the College Board squarely into the raging national debate over fairness and merit in college admissions, one fueled by enduring court clashes on affirmative action, a federal investigation into a sprawling admissions cheating ring and a booming college preparatory industry that promises results to those who can pay.

So instead of announcing that they have made reforms to eliminate outright fraud, like hiring an impostor to take the test Ted Kennedy-style, and have made the SAT less vulnerable to big time modern test prep, they’ve announced … what?

Colleges have long tried to bring diversity of all sorts to their student bodies, and they have raised concerns over whether the SAT, once seen as a test of merit, can be gamed by families who hire expensive consultants and tutors. Higher scores have been found to correlate with students from wealthier families and those with better-educated parents.

âMerit is all about resourcefulness,â David Coleman, chief executive of the College Board, said in an interview on Thursday. âThis is about finding young people who do a great deal with what theyâve been given. It helps colleges see students who may not have scored as high, but when you look at the environment that they have emerged from, it is amazing.â

A growing number of colleges, in response to criticism of standardized tests, have made it optional for applicants to submit scores from the SAT or the ACT.

Admissions officers have also tried for years to find ways to gauge the hardships that students have had to overcome, and to predict which students will do well in college despite lower test scores.

The new adversity score is meant to be one such gauge. It is part of a larger rating system called the Environmental Context Dashboard that the College Board will include in test results it reports to schools. A trial version of the tool has already been field-tested by 50 colleges. …

He added that the adversity score would not capture individual situations, like a child who was middle class but whose mother was addicted to opioids.

That’s what your college application essay is for …

âMentally adjusting scores based on where a student came from and what obstacles she overcame is common practice,â Mr. Schaeffer said. âItâs this attempt to do it in a quantitative manner that opens up many other issues.â ….

Universities like Harvard, Yale, the University of North Carolina at Chapel Hill and the University of Texas at Austin are also facing challenges to their affirmative action policies, either in the courts or through federal investigations. Many schools are preparing for the possibility that a newly conservative Supreme Court will take a hard line on the use of race in admissions decisions. The College Board says race is not factored into adversity scores.

Careful studies since the 1966 Coleman Report mandated by the 1964 Civil Rights Act have showed that school quality isn’t that big of a driver in test score variance versus the nature and nurture students bring from home.

But, if you ignore 53 years of social science and assume that the reason an 80% black school scores worse overall than a 20% black school, you could rig the numbers in favor of blacks, on average. On the other hand, you’d be punishing black strivers who have sacrificed to get their kids into a less black school. What colleges desperately want are bourgeois blacks, and this system sounds like it won’t do them any good.

By the way, the College Board tried something like this back in 1999. They called it the Strivers program, but it was unpopular and called off.

âI think this is done with at least one eye to the legal considerations that admissions officers are subjected to, the long history of lawsuits about race and ethnicity,â Mr. Hawkins said. …

Yale has used the College Boardâs new tool for two admissions cycles, said Jeremiah Quinlan, the dean of undergraduate admissions. He said it provided the same context that Yale has been looking at for decades, but does so in a standardized way across schools and applicants that is very helpful. …

He added, however, that while Yale was seeking race-neutral tools for admission, he did not think they were enough to replace the consideration of race in some cases.

The adversity score is based on data from the Census Bureau, crime data from the F.B.I., and other sources, College Board officials said. It accounts for circumstances like wealthier students going to magnet schools in poorer areas, as well as the reverse.

An anonymous commenter calls our attention to a College Board presentation of its “Environmental Dashboard.” Here race/ethnicity from a low Social Detriment/Adversity score on the left to a high score on the right. It looks like Asians will get hammered slightly less by this measure than will whites. I wonder how much the fact that Asians don’t like paying for private schools benefits them in this black box measure? Also, it looks like Latinos will benefit more from blacks.

My commenter points out that the College Board’s new system makes for a lousier prediction of college GPA.

I have found a College Board presentation on the Environmental Context Dashboard Environmental Context Dashboard: A Scalable, Systematic Approach to Educational Disadvantage that has an important graph on page 42. The graph, entitled âOver (+) or Under ((â) Performance Relative to Predicted GPA* shows that low-adversity students have slightly higher college GPAs (by about 0.1) than what their grades and test scores would predict and the high-adversity students have slightly lower GPAs (by about 0.1) than what grades and test scores predict. So it cannot be honestly said that the adversity score corrects biases present in standardized test scores. Save ListCancel
Endorsed Only
Trim Comments?
← Birth Rates and the Unhappiness ExplosionNew York Times on How White Racist Wrec... →