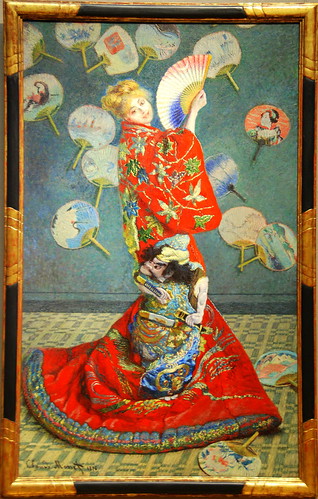 From the Boston Globe:

In an episode that speaks volumes about cultural institutions, ethnic sensitivity, and the power of protest in the digital age, the Museum of Fine Arts is hastily pulling back on an event that protesters labeled a latter-day form of racist minstrelsy.

MFA officials announced Tuesday they would recast âKimono Wednesdays,â an attraction scheduled to run throughout July. It is extremely rare for the MFA to change exhibition plans in the wake of protests; it appears such action had not been taken for decades.

Created as a light summer distraction, âKimono Wednesdaysâ invited visitors to âchannel your inner Camille Monetâ by donning museum-provided kimonos and posing for photos in front of Claude Monetâs âLa Japonaise,â a painting of the artistâs wife wearing a kimono.

But the event quickly raised the hackles of protesters, who charged that the museum was perpetuating racist stereotypes by presenting Asian culture as quintessentially exotic.

At a celebration for departing MFA director Malcolm Rogers on June 24, a small group of protesters stood vigil. âThis is appropriation, this is Orientalism,â read one sign. Rogers himself didnât seem fazed, telling the Globe, âA little controversy never did any harm.â

But the protesters were back on July 1.

âAsian-Americans in this country have a history of being mis- or underrepresented â theyâre either completely absent from the media or only depicted as Kung Fu, exoticized, mystical, dragon ladies, prostitutes, or what have you,â said Christina Wang, 29, who held a sign that read, âTry on the kimono, learn what itâs like to be a racist imperialist !!!today!!!â She added: âThis event that the MFA is putting on â asking the public to come don the kimono â is part of that legacy.â

Is “Wang” a Japanese name?

… The protests have been small by almost any standard, with only two protesters showing up last Wednesday (and one person âin supportâ) to hold signs as patrons tried on the kimonos and posed for pictures. (Suggested hashtag: #mfaBoston.)

Still, their presence made some visitors uncomfortable.

The museum initially stood its ground, presenting staffers with an internal memo defending the event and saying it would continue. âWe donât think this is racist,â states the memo, a copy of which was obtained by the Globe (and by protesters, who posted it online).

But if the protests were small on the ground, the core group of activists garnered wider support online, setting up a Facebook event page and a Tumblr account. And nowhere was the outrage greater than on the MFAâs own Facebook page, where commenters decried the event as âvilely racistâ and called for the museum to apologize.

âJust stop,â said Ames Siyuan, 26, a protest organizer, who declared that the MFA can âdo better.â âI donât see how this is arts education. If anything, it perpetuates Halloween costumes of various races.â

Monetâs 1876 painting, which shows his wife, Camille, wearing a blazing red kimono, is thought to be the artistâs wry commentary on the craze for all things Japanese that swept Parisian art circles in the 1870s. Surrounded by fans, Camille posed in a blond wig, an intentional choice to highlight her European descent.

Art historians believe Monet was poking fun at his contemporaries and the movement known as âjaponisme.â

People in Parisian art circles in the 1870s were into Japanese styles because they had the world’s best taste.

Today, however, some activists and scholars regard the 19th-century European fascination with Asia in a more sinister light, dubbing it âOrientalism,â a handmaiden of Imperialism whereby nonwestern cultures are reduced to a handful of mysterious traits â unknowable exotics and therefore less human.

âWe should have a conversation about Orientalism and why itâs wrong,â said Siyuan.

“Have a conversation” is long for “STFU, YT.”

âTheyâre perpetuating Orientalism. They donât give any context. Theyâre like, try this on, and thatâs it. Thatâs not the way to do it.â

But if the protesters were certain of their message, their meaning was lost on some visitors.

âTheyâre obviously here to make a point,â said Katelin Hardy, who arrived at the MFA last week intending to try on a kimono. After speaking at length with the protesters, however, she decided to forgo the opportunity, even if she wasnât âquite sureâ about their objections.

âThey said everyone was racist,â said Hardy. âMaybe there needs to be a little more context to it, but by the time I was done, we were leaving, and I just couldnât.â

The kimonos, which are replicas of the garment in the painting, were commissioned by the Japanese broadcaster NHK to accompany âLa Japonaiseâ for the recent traveling exhibit âLooking Eastâ; visitors to museums in Tokyo, Kyoto, and the MFAâs sister museum in Nagoya could try them on as part of the exhibit.

In other words, the Japanese don’t really care about Arab-American Edward Said’s theories of Orientalism. Why? Because Pearl Harbor. If the Arabs had ever pulled off something as technically impressive as that, they wouldn’t care either. (No, hijacking airliners with boxcutters isn’t as cool as building your own aircraft carriers.)

âIt was very successful in Japan, and we wanted to provide an opportunity to further the visitor experience in Boston,â said Getchell, who added that the MFA presented an educational talk on the eventâs inaugural night. âPeople really appreciated the opportunity to see the kimonos, to try it on, to feel it, to appreciate its craftsmanship, and to think about what it would be like for a Parisian woman to have worn that at the time for her husband to paint her.â

But Siyuan and Wang say that things are more complicated in the United States, where Japanese and other Asians represent an often-overlooked minority. The event amounted to âcultural appropriation,â Siyuan said.

Save ListCancel
Endorsed Only
Trim Comments?
← A Body Is a Terrible Thing to WasteThe New Republic Reviews Ta-Nehisi Coates →