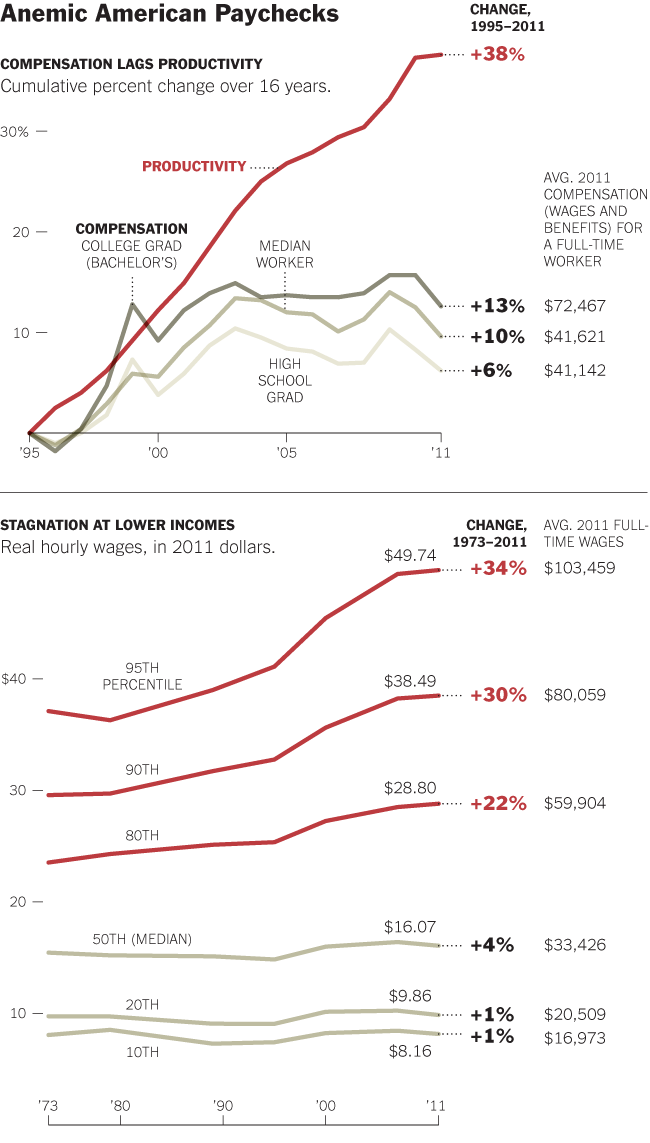 Amid Debate on Taxes and Debt, the Issue of Stagnant Pay

The debt-ceiling debate is unlikely to alter one major factor contributing to income inequality: stagnant wages.

…. Wages have fallen to a record low as a share of Americaâs gross domestic product. Until 1975, wages nearly always accounted for more than 50 percent of the nationâs G.D.P., but last year wages fell to a record low of 43.5 percent. Since 2001, when the wage share was 49 percent, there has been a steep slide.

… Some economists say it is wrong to look at just wages because other aspects of employee compensation, notably health costs, have risen. But overall employee compensation â including health and retirement benefits â has also slipped badly, falling to its lowest share of national income in more than 50 years while corporate profits have climbed to their highest share over that time.

Conservative and liberal economists agree on many of the forces that have driven the wage share down. Corporate Americaâs push to outsource jobs â whether call-center jobs to India or factory jobs to China â has fattened corporate earnings, while holding down wages at home. New technologies have raised productivity and profits, while enabling companies to shed workers and slice payroll. Computers have replaced workers who tabulated numbers; robots have pushed aside many factory workers.

Uh, I can think of another cause, which drives up supply of labor, which, ceteris paribus, drives down pay. But then I’m not a conservative nor a liberal economist, who appear to have both sworn a sacred oath to never mention the I-Word except in happy-clappy contexts.

âSome people think itâs a law that when productivity goes up, everybody benefits,â says Erik Brynjolfsson, an economics professor at the Massachusetts Institute of Technology. âThere is no economic law that says technological progress has to benefit everybody or even most people. Itâs possible that productivity can go up and the economic pie gets bigger, but the majority of people donât share in that gain.â

From 1973 to 2011, worker productivity grew 80 percent, while median hourly compensation, after inflation, grew by just one-eighth that amount, according to the Economic Policy Institute, a liberal research group. And since 2000, productivity has risen 23 percent while real hourly pay has essentially stagnated.

Meanwhile, itâs been a lost economic decade for many households. According to the Center for Budget and Policy Priorities, median income for working-age households (headed by someone under age 65) slid 12.4 percent from 2000 to 2011, to $55,640. During that time the American economy grew more than 18 percent.

… MANY economists say the stubbornly high jobless rate and the declining power of labor unions are also important factors behind the declining wage share, reducing the leverage of workers to demand higher wages. Unions represent just 7 percent of workers in corporate America, one-quarter the level in the 1960s.

Calling the ghosts of Cesar Chavez and Samuel Gompers: perhaps, if you guys weren’t dead, you could enlighten the NYT and the economics profession why massive immigration is bad for the negotiating power of unions….

It is often thought that college graduates can escape these unfortunate wage trends. But college graduates â hit by the bursting of the tech bubble in the late 1990s and then by the deep recession â have been hit hard, too. Seventy percent of the nationâs college grads have had their after-inflation hourly wages decline since 2000, according to the Economic Policy Institute, with the typical graduate experiencing a 3.1 percent decline.

Jared Bernstein, who served in the Obama administration as executive director of the White House Task Force on the Middle Class, said many steps should be taken to increase laborâs income share, including raising the minimum wage, pushing down the jobless rate, enacting laws that make it easier for workers to unionize and increasing wage subsidies for those on the bottom.

But don’t mention the I-word!

Steven Greenhouse is a reporter on labor and workplace issues for The New York Times, and author of âThe Big Squeeze: Tough Times for the American Worker.â

Recently from Author
← France Invades Uqbar / KushDaily Kos: "Racism Has a New Name: HBD" →
Hide 50 CommentsLeave a Comment
"Can You Guess the Missing Word in the NYT's "Stagnant Pay" Article?"
• 50 Comments
Commenters to Ignore
Commenters to ignore (one per line)