In the NYT, an expert on intubation explains the new view among New York emergency room doctors on what is killing so many people: silent hypoxia. Those with pneumonia caused by the coronavirus don’t have enough oxygen in their blood, but they aren’t short of breath until they’ve had pneumonia for several days, so they don’t go to the emergency room until they’ve already suffered severe lung damage.

But if you get to the hospital when pneumonia first sets in, they can probably get you through it without a ventilator.

Fortunately, there’s a simple and reasonably cheap device you can buy right now to detect if you are running out of oxygen and get treatment when treatment can do the most good.

The Infection Thatâs Silently Killing Coronavirus Patients
This is what I learned during 10 days of treating Covid pneumonia at Bellevue Hospital.

By Richard Levitan
Dr. Levitan is an emergency doctor.

A major reason this pandemic is straining our health system is the alarming severity of lung injury patients have when they arrive in emergency rooms. Covid-19 overwhelmingly kills through the lungs. And because so many patients are not going to the hospital until their pneumonia is already well advanced, many wind up on ventilators, causing shortages of the machines. And once on ventilators, many die.

Avoiding the use of a ventilator is a huge win for both patient and the health care system. The resources needed for patients on ventilators are staggering. …

There is a way we could identify more patients who have Covid pneumonia sooner and treat them more effectively â and it would not require waiting for a coronavirus test at a hospital or doctorâs office. It requires detecting silent hypoxia early through a common medical device that can be purchased without a prescription at most pharmacies: a pulse oximeter.

Pulse oximetry is no more complicated than using a thermometer. These small devices turn on with one button and are placed on a fingertip. In a few seconds, two numbers are displayed: oxygen saturation and pulse rate. Pulse oximeters are extremely reliable in detecting oxygenation problems and elevated heart rates.

Pulse oximeters helped save the lives of two emergency physicians I know, alerting them early on to the need for treatment. When they noticed their oxygen levels declining, both went to the hospital and recovered (though one waited longer and required more treatment). Detection of hypoxia, early treatment and close monitoring apparently also worked for Boris Johnson, the British prime minister.

It would be nice if the Prime Minister’s doctors would explain how exactly they treated the world’s most famous CV survivor.

Widespread pulse oximetry screening for Covid pneumonia â whether people check themselves on home devices or go to clinics or doctorsâ offices â could provide an early warning system for the kinds of breathing problems associated with Covid pneumonia. …

All patients who have tested positive for the coronavirus should have pulse oximetry monitoring for two weeks, the period during which Covid pneumonia typically develops. All persons with cough, fatigue and fevers should also have pulse oximeter monitoring even if they have not had virus testing, or even if their swab test was negative, because those tests are only about 70 percent accurate. A vast majority of Americans who have been exposed to the virus donât know it.

Amazon sells fingertip pulse oximeters for around $50, with delivery times of one to two weeks. If you don’t have one, buy one now. It could save a loved one’s life. (Granted, $50 is a ripoff: I paid $18.95 on March 8. But if you need one you need one now, so buy one now.)

The epidemiologists have only interpreted the Infection Fatality Rate, in various ways. The point, however, is to change it.

The article explains that

The coronavirus attacks lung cells that make surfactant. This substance helps keep the air sacs in the lungs stay open between breaths and is critical to normal lung function. As the inflammation from Covid pneumonia starts, it causes the air sacs to collapse, and oxygen levels fall. Yet the lungs initially remain âcompliant,â not yet stiff or heavy with fluid. This means patients can still expel carbon dioxide â and without a buildup of carbon dioxide, patients do not feel short of breath.

Patients compensate for the low oxygen in their blood by breathing faster and deeper â and this happens without their realizing it.

Free divers, who go diving in water without scuba gear, are warned against hyperventilating in advance precisely because of this phenomenon in a more extreme form.

A few weeks ago a NYC doctor put out an influential video warning that ventilators weren’t working well for this disease because it was less like the problems ventilators were built to deal with and more like the altitude sickness suffered by Everest climbers who can’t get enough oxygen in their blood. The free diving analogy might be even more helpful.

Wikipedia has a nice couple of graphs explaining the phenomenon. 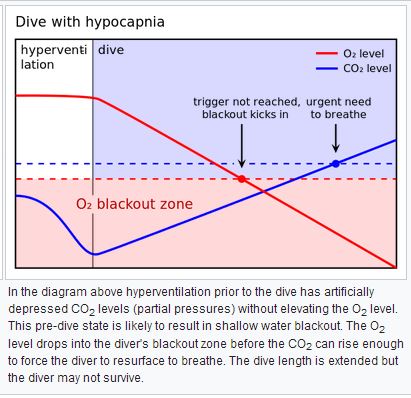 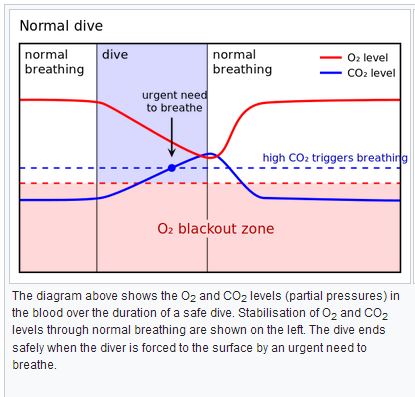 Save ListCancel
Endorsed Only
Trim Comments?
← A Case Study from a Chinese RestaurantWhat You Need to Know About Pulse Oxime... →