Boston Celtics center Bill Russell, the winningest player in the history of American pro team sports with eleven NBA championships through 1969, has died at age 88.

Russell will always be compared to his great rival Wilt Chamberlain, who racked up better scoring statistics (blocked shots weren’t recorded back then), but who won only two NBA titles. Although Russell was, by far, the greater team player, the easily bored Wilt was more interesting, I wrote in Taki’s Magazine in 2010:

… The Lakers have traditionally showcased superstars, from George Mikan, the NBAâs first big man in the 1940s, through Kareem Abdul-Jabbar and Shaquille O’Neal, to Kobe Bryant today. In contrast, the Celtics, at their best, have exemplified team play.

Before 1968-1969, for example, the Lakers augmented their Hall of Fame duo of Elgin Baylor and Jerry West with 7’1″ Wilt Chamberlain, the greatest offensive player of the era. In the 1969 finals, they encountered a dilapidated final rendition of the Celtics dynasty led by 6’9″ center Bill Russell, the greatest defensive player. The Celtics eked out a 108-106 seventh game victory for their eleventh title in Russellâs thirteen seasons.

That gave Russell a career record of 6-1 versus Chamberlain in playoff series. Thus, Russell was almost universally acknowledged then to be the better player. The changing celebrity of Chamberlain and Russell since then illustrate some of the workings of fame.

Today, Chamberlainâs gaudy individual statistics grasp the sportâs fan imagination, while Russellâs accomplishments as the finest team player ever are increasingly forgotten, although heâs still alive at 76. The Basketball Reference website, for instance, will sell you an ad on Russellâs page for half the going rate for Wiltâs page.

Chamberlain, who has been dead since 1999, has become part of American folklore. Wiltâs first name alone is enough to call to mind the statistics of which he boasted: the 100 points he scored in one game, the 50 points per game he scored for an entire season, and the 20,000 women he claimed to have scored with.

The ESPN columnist Bill Simmons, a Celtics partisan, repeatedly insinuates in his entertaining and often impressive Book of Basketball that Chamberlainâs most notorious statistic was an elaborate ruse to cover up that he was gay.

I doubt this. My guess is that Wilt was straight but not quite as prolific as he claimed. For example, with the Lakers, he had a regular girlfriend, a redheaded businesswoman who taught him recovery from injury via exercise in the swimming pool. 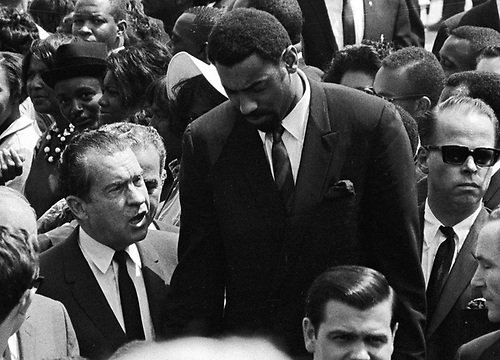 Her small-business Republicanism is why Wilt appeared onstage at the 1972 Republican National Convention with Richard Nixon and Sammy Davis Jr. I can vividly recall seeing the three together on-screen at the 1972 convention, but I can’t find a photo of them online. But it really happened: Nixon, Wilt, and Sammy.

How often was Wilt actually seen with a woman, he asks?

My impression is that their friends thought Wilt and the redhead should get married, and that while Wilt thought that was indeed a good idea in theory, he couldn’t stay away from 20-somethings, so it didn’t happen.

Personally, I saw the genial Goliath once during his growingly popular retirement. In 1981, he drove by on Ocean Boulevard in Santa Monica, shirtless in his purple Bentley convertible, majestically alone. While I have a hard time imagining that the worldâs most conspicuous celebrity had a Secret Life in West Hollywood, Americaâs gossipiest neighborhood, I’m not sure I can conceive of Wilt displaying the stick-to-it-iveness required to rack up that number, either.

Chamberlain could be a great team player for a season or two, as during his two championship years of 1967 and 1972, but he bored rapidly. He kept himself amused with idiosyncratic challenges. Wilt was an enormous eccentric, priding himself on odd statistical feats such as being the only center to lead the league in assists and in never fouling out of a game.

Thereâs a reason beyond statistics why Chamberlain looms so much larger today. Russell treated winning at basketball with consuming seriousness. Chamberlain, who started his pro career with the Harlem Globetrotters, embraced and updated for the 1960s the circus freak show aspect of a game that gives such a ridiculous advantage to height. Wiltâs career always had a hint of Globetrotterish comic exhibitionism. Granted, he usually took himself fairly seriously. Yet, his perspective on life came from such a different angle that his legend has a Paul Bunyanesque tall-tale aspect.

Chamberlainâs life seems like one long absurdist performance art project on the theme of giganticness.

He publicly pondered an offer to box Muhammad Ali for the World Heavyweight Championship on July 26, 1971 in the Astrodome. He built a famous bachelor pad in the Hollywood Hills where every fixture was Wilt-sized. He towered over 5’3″ Sammy Davis Jr. on stage with Richard Nixon at the 1972 GOP convention during a tableaux of Celebrities for Nixon.

Chamberlain generated publicity for the NBA with everything he did. For example, both Russell and Chamberlain were terrible free throw shooters, shooting 56 percent and 51 percent, respectively. But I hadnât realized Russell was so bad until I looked it up. In contrast, Chamberlain was a world famous awful free throw shooter. He submitted to countless interviews about his foul line âpsychological block,â which, in that Freudian era, was catnip for the press.

Everybody had a suggestion! Wilt tried many of the goofy ideas, such shooting free throws underhanded. In 1971, he announced he must be too strong to shoot from merely 15 feet away, so he stood three feet behind the foul line and heaved up 18 footers, with as little success (42 percent) as you might expect. (I would guess that his problem was mostly that he found free throw-shooting practice tedious.)

Height is why Wilt wasnât much interested in race, unlike Russell who became ever more militant as discrimination decreased. To Wilt, the human race was primarily divided by size, with himself on one side and everybody else on the other.