Sanders beat Clinton narrowly in Michigan in 2016, so Biden’s sizable victory there in 2020 sounds bad for Sanders’ hopes.

Joe Biden is basically the solution for the Democrats’ Coalition of the Fringes problem: older blacks love him for being Obama’s deferential VP, and moderate whites like him too.

Bernie’s problem was that:

– Biden proved electorally stronger than expected (as recently as two weeks ago).

– The rest of the field proved worse than expected.

In 2020, the Coalition of the Fringes activity has gotten kicked down to the Veep quest. The most unifying pick for the Democrats for VP would likely be Ohio senator Sherrod Brown, who is in-between Biden and Sanders ideologically but still manages to get elected in somewhat Republican Ohio. He has kind of a black-sounding name in Sherrod Brown, but he’s a straight white male, so he’s out.

The front-runner for Veep appears to be Kamala Harris, more on the basis of her 23AndMe DNA test than on the basis of her dismal run for President, in which she dropped out even before Iowa. On the bright side, there are a lot more good Willie Brown anecdotes to dust off if Kamala is back in the news.

In second is Amy Klobuchar who at least made it through the first few weeks of voting before dropping out, then wokester Stacey Abrams. 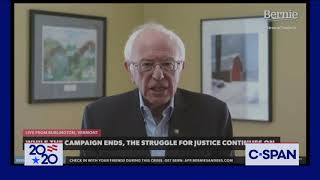