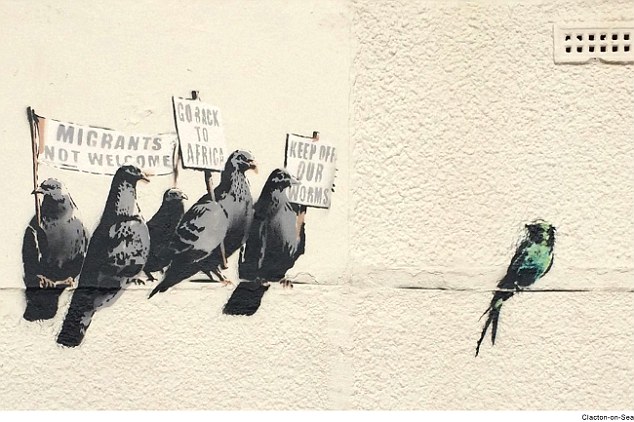 From The Daily Mail:

The Banksy that was too clever for council’s politically correct jobsworths: Officials scrub off artist’s latest satirical graffiti just a day after it appears in UKIP by-election constituency

A complaint was made that the mural was ‘offensive and racist’

Clacton-on-Sea locals were ‘gutted’ the artwork was destroyed

By STEVE HOPKINS FOR MAILONLINE

A satirical take on immigration involving birds on a wire by renowned artist Banksy has flown over the heads of council officials who labelled it ‘offensive’ and scrubbed it out.

Locals at the seaside town of Clacton-on-Sea, Essex, were abuzz when the graffiti appeared on Tendring District Council’s boathouse at West Beach this week.

It showed five grey pigeons holding up signs including one stating ‘Go Back to Africa’, seemingly aimed at a more colourful bird.

One of the pigeons’ signs said ‘Migrants Not Welcome’ whilst another was holding a placard with the words ‘Keep Off Our Worms’. 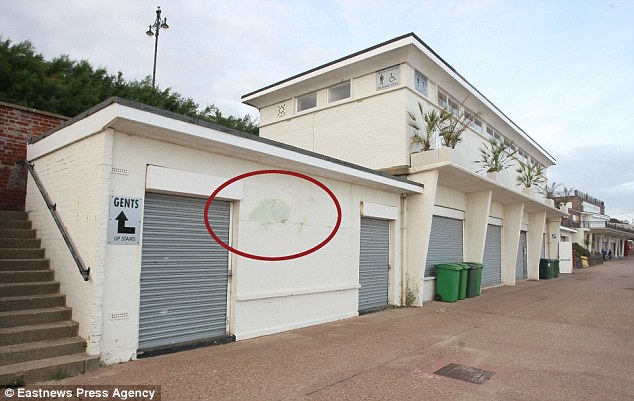 The council scrubbed the mural – potentially worth thousands of pounds – off the wall today after receiving a complaint on Tuesday from a member of the public saying ‘offensive and racist remarks’ had been painted on the wall.

One of Banky’s graffiti pieces, recently cut off brickwork in east London sold for Â£500,000, and in 2008, at artwork of his sold for over Â£1 million in New York.

Clacton-on-Sea locals were disappointed with the decision, which came just hours after Banksy posted a picture of his latest work on his website banksy.co.uk.

‘I bet that’s the last time we’ll get a Banksy here in Clacton’.

Nigel Brown, Tendring District Council’s communications manager, said staff had inspected the site after receiving a complaint and ‘agreed that it could be seen as offensive’. …

Mr Brown added: ‘We would obviously welcome an appropriate Banksy original on any of our seafronts and would be delighted if he returned in the future.’

Clacton-on-Sea has been in the headlines recently after its Tory MP, Douglas Carswell, defected to UKIP. A by-election for the seat is due to take place next week.

The clean little secret of Banksy, the masked “graffiti artist” who paints on public walls in the middle of the night, is that he is a highly gifted and well-trained traditional artist. Rubens would have hired him as an apprentice in his studio.

That was the joke behind Banksy’s pseudo-documentary movie Exit Past the Gift Shop about a promoter acquaintance who decides that if Banksy can have a lucrative art career, then he can be a conceptual artist too. But the impresario can’t draw or paint or cut interesting patterns out of paper with scissors or anything else Banksy is shown doing well in the movie, so he hires artists to do the boring art stuff for him while he dreams up the important stuff: the concepts. It’s all a hideous disaster, of course.

Granted, Banksy would be even better if he had more interesting concepts. But the world is nuts enough today that even his trite, safe little SWPL “provocations” sometimes get turned into something amusing by the powers that be.