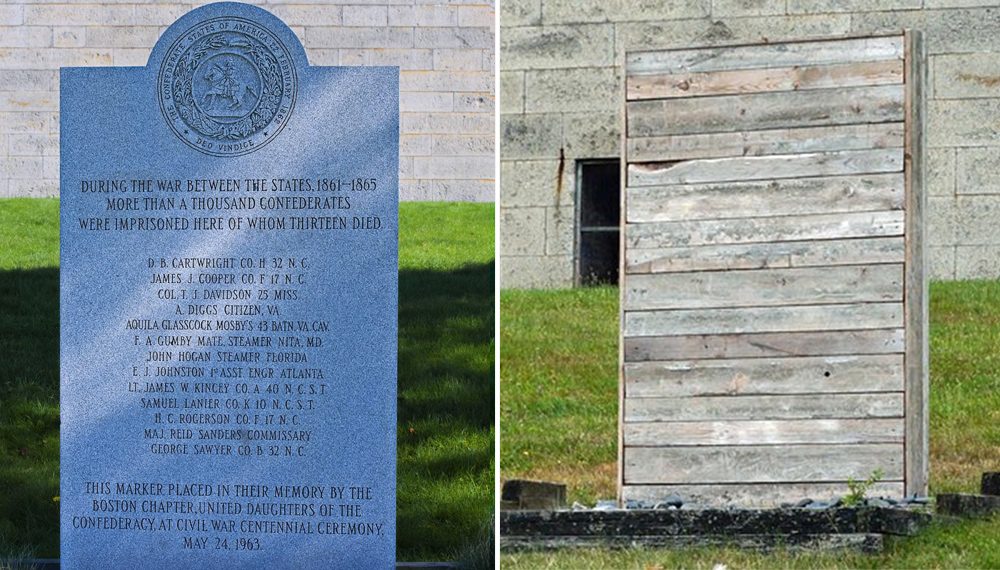 Why Boston Has A Confederate Monument â And Why You Can’t See It Right Now
August 16, 2017
Louise Kennedy

Take a boat to Georges Island in Boston Harbor, and you’ll see something you might not expect: a Confederate monument.

Actually, right now you won’t see it. The stone, the only Confederate monument in Massachusetts, has been boarded up since June while the state figures out what to do with it â a question that has new urgency in the wake of last weekend’s violence in Charlottesville.

Uh-oh, I see a chink in the wooden box that could let the Evil Spirits out.

The granite block, which sits outside Fort Warren on Georges Island, lists 13 Confederate soldiers who died there as prisoners.

Putting this POW grave marker in a wooden box is a start. But is mere wood strong enough to hold in its Evil Spirit emanations? Think of the children of Boston and even, indeed, New England being ritually polluted by its presence.

I’m not sure what the solution is for de-polluting the site, but all options must be on the table, including tactical nuclear weapons.

Perhaps the most moderate solution for re-sanctifying the site would be to round up all existing copies of Ken Burns’ PBS Civil War documentary from the Moral Dark Ages of the early 1990s and burn them on the spot. Think of all the Ken Burns VHS tapes sitting in drawers across America sending out their Hate Waves:

Save ListCancel
Endorsed Only
Trim Comments?
← So What's Happening in Boston?WMC: "Demonic Weaves Believed to be Roo... →