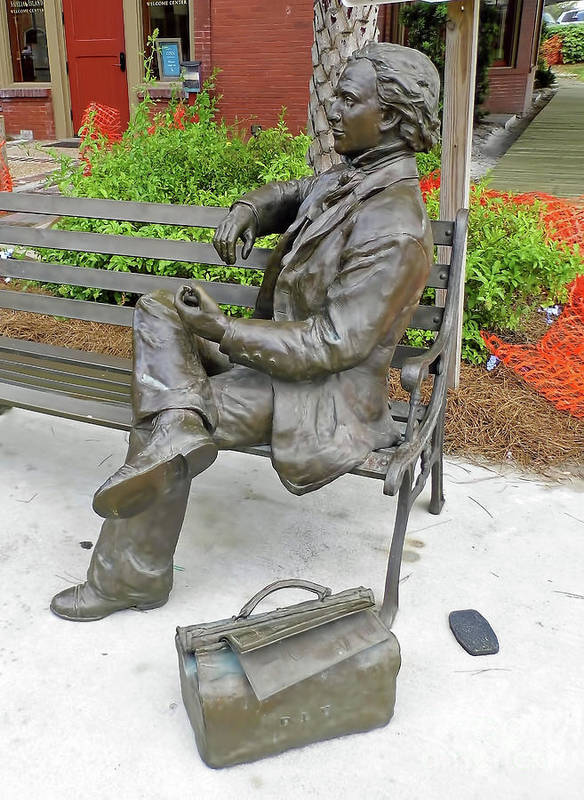 David Levy Yulee: A Man, A Moment in Time, A Monument

There is a new presence at the foot of Centre Street, in front of our Historic Depot. Fernandina is the site of the first public statue honoring David Levy Yulee. He remains a central player in Floridaâs Nineteenth Century history.

… This is not David Levy Yuleeâs first âfirst.â He played a significant role in our stateâs history. Like most of us, his life displayed contradictions, but the end result is that he served us well, first by representing the territory of Florida in Washington D.C. and later as a two-term US Senator, the first Jew to hold that position. …

David is considered to be the Father of Florida Statehood. …

… Having fought valiantly and successfully for statehood, David was among the first to secede. A man of his region, he was a Jacksonian Democrat who strongly supported the concept of Statesâ Rights, territorial expansion, rugged individualism and a small central government. …

At the end of the War, David was held in Ft. Pulaski due to a letter he sent to Joseph Finegan. It was discovered when the Federal troops took control of Amelia Island. In it, David encouraged seizing Federal military property and turning it over to the Confederacy. This was considered a treasonable offense, as it was sent before secession while he was still serving as a U.S. Senator. Yulee was granted amnesty in May 1866 through the intervention of General Ulysses S. Grant, some 13 months after the conclusion of the war.

Yuleeâs prosperity, like that of so many in the early years of our Countryâs history, was enabled through the labor of slaves. Thankfully, after the War, this would no longer be the case. Yulee redirected his considerable energy and vision on the future. Pragmatically, in a letter to a friend, he stated, âIt is bootless to look back.â His desire for political power had been channeled into rebuilding the future of his railroad and Floridaâs economy. …

David Levy Yulee is the Father of Florida Statehood and the first Jew to serve as a U.S. Senator, a visionary who wrested a railroad from the wilderness that was early Florida.

This new statue of the politician known as “Florida Fire Eater” for his pro-slavery speeches was unveiled on June 12, 2014.

Unlike his cousin Judah P. Benjamin, the second Jewish Senator, Levy Yulee didn’t hold important posts under the Confederacy. And unlike Benjamin who fled to England in 1865 to escape punishment, after the war Levy Yulee did his time, and then got back to work building up Florida’s railroads. He was so successful at this that President Grant came to stay at Yulee Levy’s house. This exercise in good will was seen as a symbol of reconciliation between the North and the South.

Recently from Author
← Slate: "Stop Talking About Race and IQ"The Tablet on the SPLC →
Hide 63 CommentsLeave a Comment
"At Least One Confederate Has Gotten a Statue Erected in His Honor in the Obama Age: Senator David Levy Yulee"
• 63 Comments
Commenters to Ignore
Commenters to ignore (one per line)

Save ListCancel
Endorsed Only
Trim Comments?
← Slate: "Stop Talking About Race and IQ"The Tablet on the SPLC →