Luxury wines are a trillion dollar a year industry, yet wine tasters can't distinguish between low and high quality wines in blind tastings, will rank wines higher based on the price or label, and have even been fooled with a bit of food coloring into thinking white wine is red.

So, I only buy box wine at Costco.

But there’s endless evidence that other people aren’t as deficient in this regard as I am.

Isn’t it simpler to assume that some people really can tell wines apart by taste and smell?

For example, there has been a vast influx into the wine industry over the last half century of rich Silicon Valley nerds. Are you saying they all agreed to propagate the ancient hoaxes about fine wine rather than figure out some way to prosper by beating the system?

An interesting distinction between New York and Northern Californian rich people is that the former like investing in modern art while the latter prefer investing in vineyards.

For instance, Richard Serra is an obnoxious artist who puts up rusted iron walls in public spaces like an urban version of the Berlin Wall, like his “Tilted Arc” that Manhattan federal building workers finally had torn out in 1989 because it ruined the open space where they eat their brown bag lunches.

Two decades ago, the administration of Caltech in Pasadena announced that they wanted to put one of Serra’s pieces of Plop Art on the only open grass field left on their tightly packed campus. But the student nerds objected that that’s the only place where they could play Ultimate Frisbee. 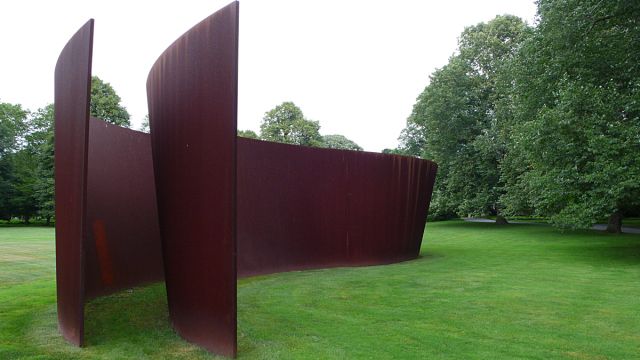 Eventually, Caltech president David Baltimore gave in to the Big Bang Theory types, saying, “This is not a judgment about the quality of the proposal, but rather a judgment about the needs of the campus,” which needed an open lawn more than it needed one of Serra’s rusting hulks.

On the other hand, when I visited the Hamptons a half decade ago, I was struck that Serra’s sculptures look fine when off to the side of some Master of the Universe’s multi-acre front lawn.

Save ListCancel
Endorsed Only
Trim Comments?
← Pride Month Spread Not Just Monkeypox B...Race Does Not Exist, Except When It Com... →