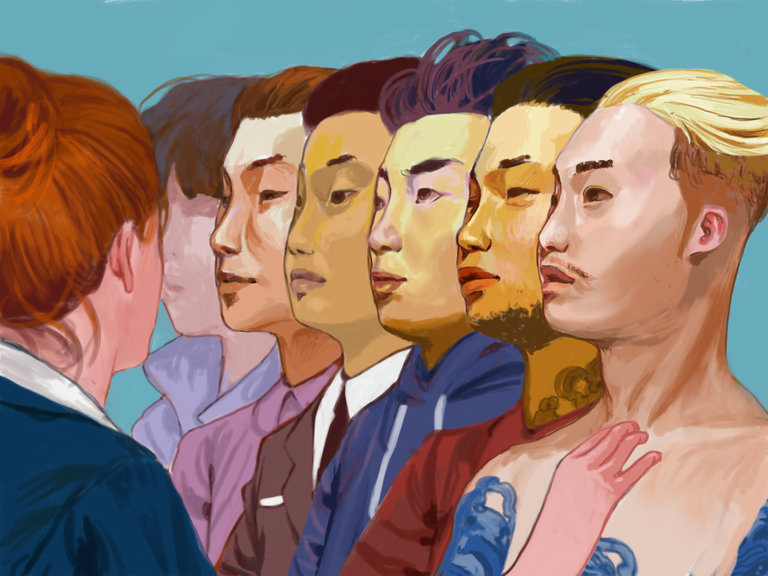 … On Jan. 6, Steve Harvey did a roundup of dating books on his talk show, displaying an image of the cover of âHow to Date a White Womanâ, and said the book could be only one page long: â âExcuse me, do you like Asian men?â âNo.â âThank you.â â He then asked an imaginary black woman if she liked Asian men, and acted out her response: âI donât even like Chinese food, boy. It donât stay with you no time. I donât eat what I canât pronounce.â

As my therapist would say, I have a lot of âfeelingâ about his sentiments.

Before ever reading about the history of discrimination against Asian-Americans â from the âyellow perilâ to the Chinese Exclusion Act to the Japanese-American internment camps to the model minority myth to Vincent Chin and Pvt. Danny Chen â every Asian-American man knows what the dominant culture has to say about us. We count good, we bow well, we are technologically proficient, weâre naturally subordinate, our male anatomy is the size of a thumb drive and we could never in a thousand millenniums be a threat to steal your girl. …

So many Asian-Americans I grew up with bought into the expectations the dominant culture placed on them and did everything they could to meet them. I recognized from a young age that I couldnât and began to plan for life on the margins.

I realized that people on the margins arenât afforded the privilege of being complicated, whole, human beings in America; we have to create that existence ourselves, and it is that experience that I feel fundamentally binds us. Over time, I began to find solidarity with my singularity and difference. Yet the one joke that still hurts, the sore spot that even my closest friends will press, the one stereotype that I still mistakenly believe at the most inopportune bedroom moments â and I know Joe and Steve do as well â is that women donât want Asian men. Attractiveness is a very haphazard dish that canât be boiled down to height or skin color, but Asian men are told that regardless of what the idyllic mirepoix is or isnât, we just donât have the ingredients. …

I told myself that it was all a lie, but the structural emasculation of Asian men in all forms of media became a self-fulfilling prophecy that produced an actual abhorrence to Asian men in the real world.

Thatâs why this Steve Harvey episode is so upsetting.

Steve Harvey, a genial TV host whose sensible advice books for black women on how to snag a black man with a job are turned into hit feature films, is a huge figure in African American popular culture.

But I suspect a lot of New York Times subscribers have no clue what race Steve Harvey is so they figure he’s another one of these evil white men they’re always reading about.

After all, is Huang allowed to even conceive that a black man is part of the dominant culture? Wouldn’t that mean that Asians are fringier than blacks and thus entitled to more intersectionality Pokemon Points? Are you sure you are ready for that battle?

Thank God there are cishet white males around to blame for everything or we might see the Coalition of the Fringes at each other’s throats.

Recently from Author
← NYT Sums Up Obama: Yeah, It Really Was ...Mesoaggressions in English Literature →
Hide 267 CommentsLeave a Comment
"Another Coalition of the Fringes Crevice: Steve Harvey Disses Asian Men's Chances with White Women, "Dominant Culture" to Blame"
• 267 Comments
Commenters to Ignore
Commenters to ignore (one per line)

Save ListCancel
Endorsed Only
Trim Comments?
← NYT Sums Up Obama: Yeah, It Really Was ...Mesoaggressions in English Literature →