A group of leading biologists on Thursday called for a worldwide moratorium on use of a new genome editing technique to change human DNA in a way that would permanently affect future generations.

The biologists fear that the new technique is so effective and easy to use that some physicians may push ahead with it before its safety can be properly assessed. They also want the public to understand the ethical issues surrounding the technique, which potentially could be used to cure genetic diseases, but also to enhance qualities like beauty or intelligence, a path that many ethicists believe should never be taken.

âYou could exert control over human heredity with this technique, and that is why we are raising the issue,â said David Baltimore, a former president of the California Institute of Technology and a member of the group, whose paper on the topic was published in the journal Science.

Ethicists, for decades, have been concerned about the dangers of altering the human germ line â making changes to human sperm, eggs or embryos that will last through the life of the individual and be passed on to offspring. Until now, these worries have been theoretical. But a technique invented in 2012 makes it possible to edit the genome very precisely and with much greater ease than earlier methods. The technique has already been used to edit the genomes of mice, rats and monkeys, and few doubt that it would work the same way in people.

Any such use is tightly regulated in the United States and Europe. American scientists, for instance, would have to present a plan to treat genetic diseases in the human germ line to the Food and Drug Administration, which has not yet approved such a plan.

The biologists writing in Science, however, are concerned about those countries in which science is less well regulated. They urge that âscientists should avoid even attempting, in lax jurisdictions, germ line genome modification for clinical application in humansâ until the full implications âare discussed among scientific and governmental organizations.â … 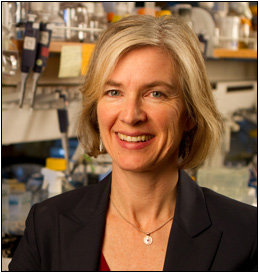 The new genome-editing approach was invented by Jennifer A. Doudna of the University of California, Berkeley, and Emmanuelle Charpentier of Umea University in Sweden.

By the way, when we hear all the time about how horrible it is that women are not an equal percentage of nuclear bomb designers or whatever, it’s worth keeping in mind that the top women have tended to go into the life sciences rather than the death sciences.

Their method, known by the acronym Crispr-Cas9, co-opts the natural defense system with which bacteria precisely target the DNA of the viruses that attack them. Researchers can simply prime the defense system with a guide sequence of their choice and it will then home in on the matching DNA sequence in any genome presented to it. Dr. Doudna is the lead author of the Science article calling for control of the technique and organized the meeting at which the statement was developed.

Though highly efficient, the technique occasionally cuts the genome at unintended sites. This does not matter in laboratory experiments but could be hazardous when applied to the human germ line. The issue of how much mistargeting could be tolerated in a clinical setting is unresolved and is one that Dr. Doudnaâs group wants to see thoroughly explored before any human genome is edited.

Scientists also say that replacing a defective gene with a normal one may seem not be entirely harmless, given that there is insufficient research about how genes interact.

Practical genetic engineering for positive eugenics still seems a long, long way off, since most desirable traits appear to be the result of interactions of numerous genes that we don’t understand yet, with IQ being likely the most immensely complicated. Understanding, first, how to boost IQ, and, second, understanding the tradeoffs that would be involved, is daunting just to muse upon, much less to accomplish.

But what about genetic engineering for negative eugenics, such as fixing simple, well-understood genetic problems, such as Huntington’s, Tay-Sachs, or sickle cell anemia? For example, the Dor Yeshorim (or Committee for Prevention of Jewish Genetic Diseases) charity tests for Tay-Sachs to avoid marriages among those at risk for procreating children who would suffer from it. Would a higher tech version of negative eugenics appeal to those at risk?

Perhaps those kind of diseases are where germ line human genetic engineering will get its foot in the door?

As I’ve been saying since the 1990s, the inevitability at some point in the future of genetic engineering technologies implies that we ought to be studying the effects of naturally occurring human biodiversity in the present so we don’t walk into the next age of human history blinded by ideology.

Recently from Author
← Headline V. BodyChristopher Caldwell: "The Browning of ... →
Hide 86 CommentsLeave a Comment
"And So It Begins"
• 86 Comments
Commenters to Ignore
Commenters to ignore (one per line)

Save ListCancel
Endorsed Only
Trim Comments?
← Headline V. BodyChristopher Caldwell: "The Browning of ... →