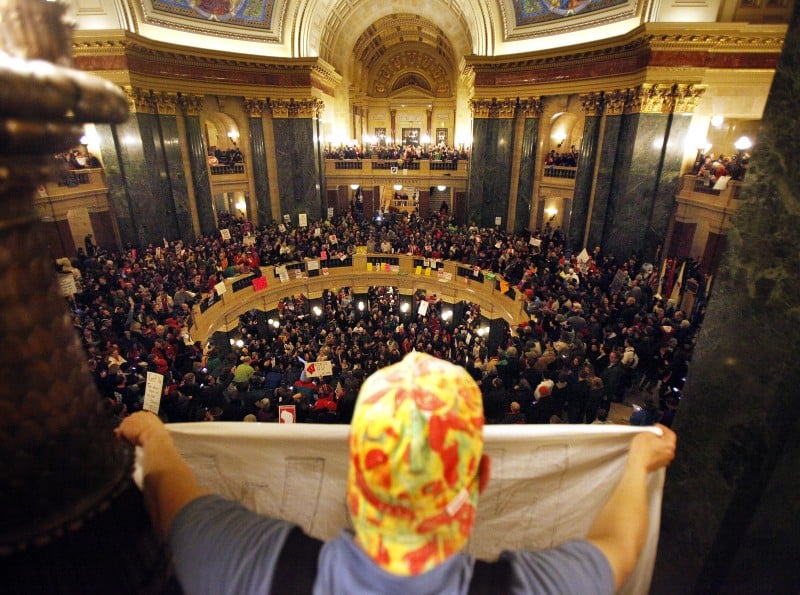 Shortly after 8 p.m. Wednesday, hundreds of protesters gathered outside the locked King Street entrance to the Capitol, chanting “Break down the door!” and “General strike!”

Moments later, police ceded control of the State Street doors and allowed the crowd to surge inside, joining thousands who had already gathered in the Capitol to protest the votes. The area outside the Assembly, which is scheduled to take the bill up at 11 a.m. today, was crowded with protesters who chanted, “We’re not leaving. Not this time.” …

Department of Administration spokesman Tim Donovan said although protesters were being encouraged to leave, no one would be forcibly removed. … Mayor Dave Cieslewicz said he had instructed … Police Chief Noble Wray not to allow his officers to participate in removing demonstrators from the building.

At one point, officials estimated up to 7,000 people had spilled into the Capitol, some coming through doors and windows opened from the inside, including one legislative office and several bathrooms. Some door knobs and door handles were removed, Donovan said.

Officers eventually retrenched to the third floor, Donovan said, adding, “it was felt by several law enforcement officials that the best solution was to keep everybody safe” and stop trying to keep the crowds out.

That article is not about today in Washington, that’s about 9 years ago in Madison, from the Wisconsin State Journal:

These kind of mob actions in Madison went on for months in 2011. But they’ve disappeared down the memoryhole because the mob was Democratic. So, therefore, they were the Good Guys, not the Bad Guys. It’s hard to remember facts that contradict The Narrative.

In contrast, the childish LARPers who got into the US Capitol today will of course go down in Narrative infamy, like the Charlottesville LARPers. They were the designated Bad Guys already, so their bad behavior plugs seamlessly into the prefab Narrative.

That’s not fair, but that’s how it works.

By the way, do Democrats now favor the use of facial recognition software for prosecuting the trespassers?

Another question: How much rioting would there have been in D.C. if Trump had won?

We can tell who was the main threat by the behavior of D.C. business owners who boarded up their windows during Election Week until Joe Biden was announced the winner.

From WUSA9 in Washington D.C. after Biden had been declared the victor by the media:

DC businesses start to take down plywood after 2020 Election worries

DC officials asked all businesses and property owners to remove boards and fencing that were put up last week across the District.

WASHINGTON â DC officials on Sunday asked all businesses and property owners to remove boards and fencing that were put up last week across the District.

WUSA9 saw some had started the process Sunday night, with people still celebrating in the District after former Vice President Joe Biden was projected to be President-elect by multiple media outlets.

There were not tons of damage seen on election night.

A lot of the fears were due to the destruction of property that happened after outrage over George Floyd’s death sparked peaceful and violent demonstrations in the Nation’s Capitol.

In other words, if Trump had, say, eked out a 269-269 Electoral College tie with a vote by state delegations in the House giving him a second term, DC would look more or less like this today after the Mostly Peaceful Protesters were done with it: