Roma is a nice little black & white movie about growing up upper middle class in Mexico City in 1971.

It’s the first film from Alfonso Cuaron, one of the Three Amigos of Mexican directors (along with Innaritu and Del Toro) whose movies always get lots of Oscar attention, since his 2013 astronaut film Gravity. Unfortunately, it’s suffering from The Artist’s curse in which the Academy and end of year lists overhype an interesting small film that would be more fun to stumble upon without grandiose expectations.

Cuaron, whose father was a rare Mexican nuclear physicist and his mother was a biochemist, grew up in Roma, the fashionable Mexico City neighborhood where his his very white family and their Mixtec-speaking Indian servants lived. (In one scene they go to the beach and the children get sunburned while the maid, of course, does not.)

Presumably, the title Roma is also a nod to the neorealist style of 1940s Italian movies filmed on low budgets in Rome, such as Rome, Open City and The Bicycle Thief.

One of their young Indio maids is the main character of what plot there is. Roma is intended as a tribute to this faithful family retainer. There are similar tributes to similar servants with the proper feudal spirit in the childhood memoirs of other privileged high achievers, such as Nabokov and Churchill. iSteve Commenter Paul Rise notes:

Cuaron holds the narcissism so many successful Mexican men do, he is saying â look at this noble savage, more loyal than any dog. She did so much and is so responsible for my important, world scale success. She nurtured and enabled the gift to civilization that I am.

That’s harsh but reasonably fair. Keep in mind that I feel that Cuaron’s self-satisfied nostalgia is justified. He is a fine movie director and I am glad that he had loyal servants to provide him with a nice upbringing. It’s pleasant to see him reproduce childhood moments that inspired his movies decades later: e.g., the kids go to see Marooned, the 1969 astronaut movie that served as a first draft for Gravity.

For a film shot in a neorealist style with no color and no musical score, just a lot of incidental sound (such as the constantly barking dogs that I too associate with Mexico), Roma cost a substantial $15 million. Cuaron reproduced the townhouse he grew up in meticulously. But maybe he should have been a little more fanciful because Casa Cuaron turns out to have been lacking in Nabokovian splendor.

He also spent expansively on Felliniesque crowd scenes, such as the background in one scene where, while the main character walks down the street oblivious, an outdoor circus performer is shot out of a cannon. I also liked the kung-fu fascists scene in which Cuaron has assembled hundreds of rightwing martial artists under the guidance of the American deep state. 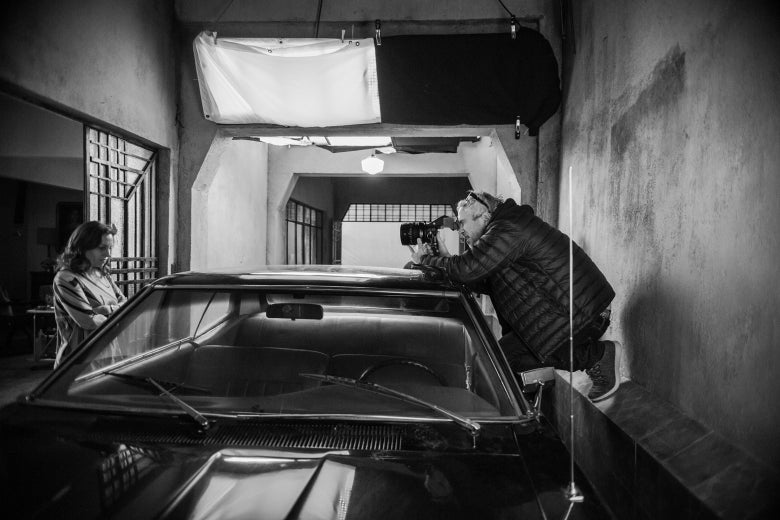 But the best stuff is various childhood memories filmed from a 3 foot tall boy’s point of view, such as his father nightly parking his huge Ford Galaxy in their driveway, which is only one inch wider than the car. (I think I might have been to this neighborhood, where my friend’s aunt owned a four story townhouse, on a 1979 RV roadtrip. Driving across Mexico City the next morning was a memorable lesson in just how wide a Winnebago is. For 25 miles, we had to delegate passengers to look out the window and pull in the side mirrors whenever another large vehicle approached.)

On the other hand, lots of talented directors have made this kind of boyhood memories film (e.g., Tornatore’s Cinema Paradiso, Zeffirelli’s Tea with Mussolini, Malick’s Tree of Life and Linklater’s Boyhood), and Roma doesn’t stand out from them. Part of the problem is that Cuaron is trying to tell the story of his Mixtec-speaking maid, but nine year old boys, even ones who are future film directors, aren’t that observant about what life looks like to people of other sexes, races, classes, and ages.

So, while Roma is not wholly lacking in incident, it is lacking in dramatic tension, other than the usual fear inherent in Mexican life that at any moment somebody could get maimed in another random accident caused by the ambient carelessness.

Also, the cinematography is uninspired. You expect a black and white art film to look crisp, right? But Cuaron’s usual cameraman, three-time Oscar winner Emmanuel Lubezki, was unavailable, so Cuaron did the camera work himself. Roma came out muddy looking in low-contrast B&W.

Also, Cuaron edited his autobiographical movie himself. Editor Cuaron was very generous to Director Cuaron over how many extra seconds to linger on each shot. Perhaps my chair was uncomfortable, but that was a pretty long 135 minutes.

A final problem is that life in Mexico is just less visually appealing than life in Italy. Thus the most commercially successful movie recently set in Mexico, Pixar’s Coco, totally revamped what Mexico looks like. (Cuaraon, personally, has lived in London since 2000.)

The Three Amigos are big shots because they make cool looking movies, not because they are philosophical geniuses. Many of their films are kind of ridiculous, such as Cuaron’s Children of Men, Innaritu’s Babel and Birdman, and del Toro’s Oscar winner about the lady who has sex with a frog, My Favorite Color Is Red. Roma is neither ridiculous nor cool looking, so it’s a little meh.

Roma is now on Netflix.

Save ListCancel
Endorsed Only
Trim Comments?
← Did the Word "Problematic" Always Mean ...Atlantic: A New Satirical Novel Is Not ... →