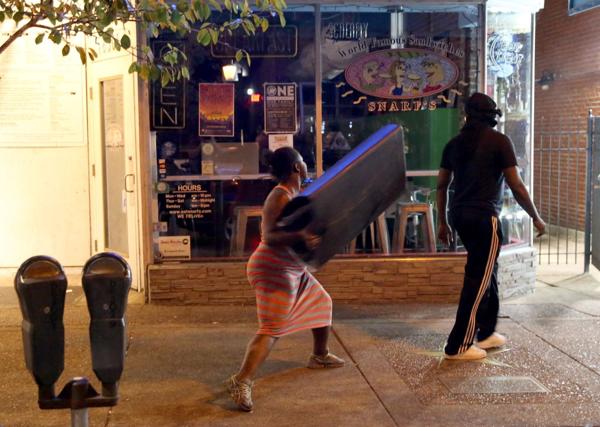 Shortly before 11 p.m. at Leland and Delmar, a small group of protesters threw chunks of concrete at police and broke windows at numerous Delmar Loop businesses. A chair was thrown through the window of a Starbucks. One protester was seen hitting a police SUV with a hammer.

… As the chaos escalated, scores of police officers in riot gear pushed forward against the demonstrators just after 11 p.m. â about two hours after daytime protest organizers had congratulated their followers on keeping their demonstrations peaceful.

By 11:30, about 200 police officers had pushed most of the protesters out of the area and the violence and vandalism appeared to be dissipating. The sidewalks along the vibrant area of restaurants and shops were strewn with glass from broken windows.

By shortly after 7 p.m. Saturday, more than a thousand protesters carrying “Black Lives Matter” signs and chanting things like “No Justice, No Profits” were blocking the major intersection at Skinker and Forest Park Parkway near Washington University.

Recently from Author
← Somali Family Values in MinneapolisDamnatio Memoriae: Dallas Thinking Abou... →
Hide 55 CommentsLeave a Comment
"A Little Too Much Vibrancy in St. Louis"
• 55 Comments
Commenters to Ignore
Commenters to ignore (one per line)