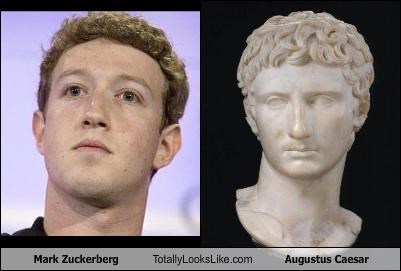 I give classicist Donna Zuckerberg a hard time, but it couldn’t have been easy growing up as Mark Zuckerberg’s sister. I suspect there are a lot of unresolved issues among the Zuckerberg siblings, especially when your brother, the richest and most powerful man of his generation, probably radiates the assurance that he’d have been a better classicist than you. (And you suspect he’s right.)

It’s not wholly a coincidence that Mark wears his hair like a Roman emperor’s. From Business Insider:

… And then he told the story about how his love for Rome and all things Roman almost took him in such a radically different direction with his life, that Facebook probably never would have been born. He said:

“I love Rome. I studied Latin and Roman history and culture. I loved it so much that when I was going to college, I actually thought I was going to major in Classics. I didnât. I ended up majoring in computer science and psychology. But I didnât make it that long in college anyway.”

A degree in Classics is a degree in the literature, language and cultural history of ancient civilizations. It’s a degree most closely associated with becoming a high school Latin teacher or a college professor.

“I love Rome so much, that when my wife and I got married, We came to Rome on our honeymoon. I made us go to all of these different historical and classical places. So much so, that when we got back and we were looking through the photos, my wife was making fun of me, saying she thought there were three people on the honeymoon: me, her and Augustus. All the photos were different sculptures of Augustus.”

Donna Zuckerberg’s Eidolon mag goes on and on about the “whitewashing” of the Ancient world.

But here’s a bust restored to its original color scheme, which looks remarkably like her brother’s color scheme.

When reading Donna Zuckerberg’s plan to dissemble Classics to fight white supremacy, I’m reminded of Paleo Retiree’s account of his unfortunate encounter with Freudian psychoanalysis when young. As a naive upstate New Yorker, he assumed that because all these high IQ New York City people were obsessed with Freudianism, it must be a real thing. It took years for him to realize that Freudianism wasn’t supposed to be real, it was just a way for Jewish workaholics to vent about their family members for 50 minutes and then get back to making money. Only trusting WASPs like P.R. took it seriously.

Similarly, a lot of today’s Social Justice Jihadism appears to be a way for Jews to project their various resentments of their loved ones out on to society as a whole. It seems like a pretty effective ethnic tradition at keeping Jews away from each others’ throats (although the damage to the rest of society is not insignificant): I love my brother Mark, but sometimes he drives me crazy. But then I have to remind myself that he’s just the way he is because society, going back to the Romans and Greeks, made him that way. When you really think about it, Mark Zuckerberg is a victim of society.

Recently from Author
← The More Things Change the More They St...The NYT Finally Finds One Type of Refug... →
Hide 179 CommentsLeave a Comment
"A Classic Sibling Rivalry"
• 179 Comments
Commenters to Ignore
Commenters to ignore (one per line)

Save ListCancel
Endorsed Only
Trim Comments?
← The More Things Change the More They St...The NYT Finally Finds One Type of Refug... →