In Ankara, the capital of Turkey, in the course of defending the cause of Palestine, I’ve met with wonderful Cynthia McKinney, who would be the best president for the US. After this touching meeting, she wrote to her list:

I can hardly believe this moment!! Israel Shamir has written about me and lifted my spirits when I was most down. Even from faraway Israel, he understood my plight and dared give voice to the truth. They say that sometimes distance gives clarity–and certainly in Israel’s case, in observing my serial targeting, he saw what many inside the United States could not see. Despite his writings, I never met him until this moment, just a few minutes ago!! We are speaking together this afternoon in Ankara, Turkey. He has already sent his message out on his list and so I include it here for you. I will send my message to you later. I will bring these contacts from around the world that I have made on behalf of peace, home to the United States so that we can more easily achieve our objectives for justice and peace and dignity in the area of policy where we and the world need it the most. We are a part of something much bigger than us individually, and our moment is now.
I add to it now what I wrote about Cynthia a few years ago:

Things must be bad indeed if a woman steps forward to the line of fire. Nature arranged that a woman does not court danger unless her land and her folks are in real trouble. But when she does, she teaches men a lesson of manly behaviour.

When France was fading away, a shepherd girl Jeanne dâArc took a heavy sword and led the flower of French nobles to assault the walls of Orleans. When cities of Republican Spain was strafed by the Nazi Luftwaffe, it was a woman, Dolores Ibarruri, La Pasionaria, who said to her people: it is better to die tall, than to live on your knees. In 1990, when Mikhail Gorbachev led his country to disaster and disintegration, a year before the wealth of Russia was embezzled in privatisation spree, only one person has dared to raise her voice against the dictator in the parliament. She was the indomitable Sashie Umalatov, an MP from the Chechen Mountains.

Now it is the turn of the US to feel the chilly wind of eternity on its face. It came from unexpected direction. People of America became hostage in the hands of a few men with too many dollars in their pockets and endless greed in their hearts. For millennia, the difference of income, education, and standard of living was not so vast in one land. The wealth of the nation could provide every American with a superb education, perfect medical care, happy childhood, secure old age, guaranteed home, and free time to open oneâs mind to new thoughts and old friends. America could be on its way to the Golden Age of universal happiness and wisdom. 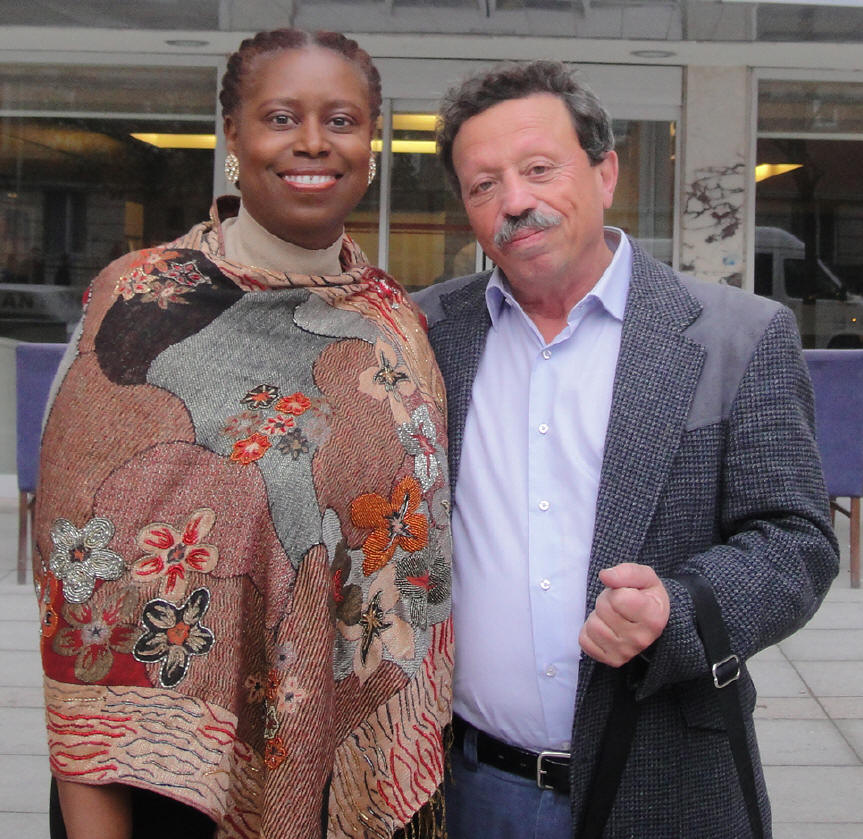 Instead of it, a small group of men squeezes the nation in order to add another billion to their coffers. They would surely destroy the US by their limitless greed. The devotees of Mammon, they are totally devoid of compassion to the people they live amongst. They do not see the local people as âtheir own kindâ. If they want to show compassion, they send money to Israel. Out of five dollars American taxpayer gives for aid, four dollars land in the coffers of the Jewish state. They appear unstoppable, as the politicians are scared of them and docilely raise their hands and sign the pledge promising to send more money to Israeli generals. Support of Israel is not a foreign policy. It is the covenant of the Mammonites, and you sign it with blood. With Palestinian blood.

But one woman refused to sign the pledge. One woman, Cynthia McKinney, a member for Georgia, dared to refuse. Four hundred congressmen signed it; they preferred their own personal advancement to the good of the country. Ancestors of Cynthia were slaves in her native Georgia. But she is one of a very few free persons in the US Congress. As we Israelis were used to say about our Golda Meir, she is the only man over there. She is a black woman, but she is the whitest man of them all, they would say before the Politically Correct era. She knew the billions of Israeli aid are needed for the poor people of the United States, for her own Afro-American community. She wanted to uphold the sovereignty of the people and congress of the United States, in face of encroaching servility to the Jewish Lobby.

She is not alone. Another wonderful Afro-American congresswoman, Barbara Lee, cast the only vote against the slaughter in Afghanistan; John Conyers, Jessie Jackson Jr, and Maxine Waters supported the cause of Palestine on different occasions. Ron Paul of Texas voted against all-house resolution sending obsequious greeting to General Sharon. Nick Rahall, John Sununu, David Bonior did not bend.

Cynthia was just more outspoken in seeing the evil. She said [i][i], âThere are many Members of Congress who want to be free. I am one of them. I wanted to be free to vote according to my conscience, but I had been told that if I didn’t sign a pledge supporting the military superiority of Israel, no support would come my way. And sure enough, I didn’t sign the pledge and no support came my way. I suffered silently year in and year out, because I refused to sign that pledge. And then, like a slave that found a way to buy his freedom… I went to work … I wanted to be free … Free to cast the votes in the United States Congress as I saw fit and not as I was dictated toâ.

Now she stands for re-election, and her chances are dim, as the frightful AIPAC, the spearhead of the organised Jewish community, targeted her. They do not want to see independent and free congressmen on the Capitol Hill. Their huge financial might, network of connections in the media and universities are used to smother every free voice. They succeeded to unseat Earl Hilliard, another Black Congressman, who did not bow to Sharon, and now plan to do Cynthia in. If they succeed, the cause of freedom will suffer a huge setback. If she succeeds, the myth of Jewish omnipotence will evaporate, and America will look towards better days, as support or rejection of segregated Israel speaks volumes about true agenda of a candidate.

Cynthia is not âagainst Jewsâ, as there are many very good folks of Jewish origin. While the organised Jewish community implements quite a disgusting policy, in domestic and foreign affairs alike, there are wonderful outsiders, âthe remnant of Israelâ. Rejected by the community and rejecting it, they stand for integration in Palestine and in the US. Some of them have supported Cynthiaâs campaign; another outsider manages her campaign. Through them, âyou will be blessed by all peopleâ, the Lordâs promise to Abraham is made true.

I am not sure whether Rabbi Michael Lerner, the editor of Tikkun, a âProgressive Jewish monthlyâ from California, will be equally blessed. Rabbi Lerner has spoken in support of Cynthia McKinney, but demanded in return to âcall for Israel to be given either membership in NATO or a mutual defence pact with the U.S.â Such a support defeats its purpose. As if the military and political US backing of the racist Jewish state were not sufficient, Lerner wants to establish it in law. Cynthia openly spoke against hegemony of the Zionist Lobby, against Israel connection. Lerner offers to achieve the purpose of the Zionist lobby under pretence of fighting it. This sophisticated cunning is not unusual for crypto-Zionists, acting as deep penetration agents outside their milieu, and Lerner already has performed a similar task for the Zionists during Durban Conference [ii][ii]. Next time, he will fight heroin addiction by demanding the drug to be sold in every shop. Cynthia and other congressmen should accept his offer of help for what it is worth, but reject his demand of political payoff to Zionists.

Cynthiaâs is not a divisive voice of Blacks vs. Whites, nor Democrats vs. Republicans, neither Left against Right. She speaks for the people of the US against foreign interests. She is the congresswoman who dared to remind of the USS Liberty seamen, butchered by Israeli heavy machine guns and missiles. She reminded her audience of the last stand of Faris Ode, the brave Palestinian kid who faced the Israeli tank with a stone and was murdered. She stands against corporate greed. She stands for the nature deemed expendable by the Greedies.

This woman with a name from the love lyrics of Propertius, the delicate Greek poet, who called himself âa pale knight in thrall of my angry Cynthiaâ, is an all-American figure, brought forth by the spirit of America. The great country does not want to die. In such moments, the land calls for its sons and daughters to step forward to the line of fire. Cynthia heard the call. Support of Cynthia is the ultimate test of love to America, of belief in Americaâs future in the family of nations, as an equal and friendly nation, not as an enforcer for creed of Greed.

It is paramount to rally around her, as the French nobles rallied to Jeanne dâArc. Whether you are a descendant of African slaves or Muslim immigrants, a son of Confederacy or a Daughter of American Revolution, a freedom-loving Jew or a born-again Christian – it is the time to unite for Cynthia and for America. America the Feckless
How low can we go?
Philip Giraldi
• 138 Comments • Reply