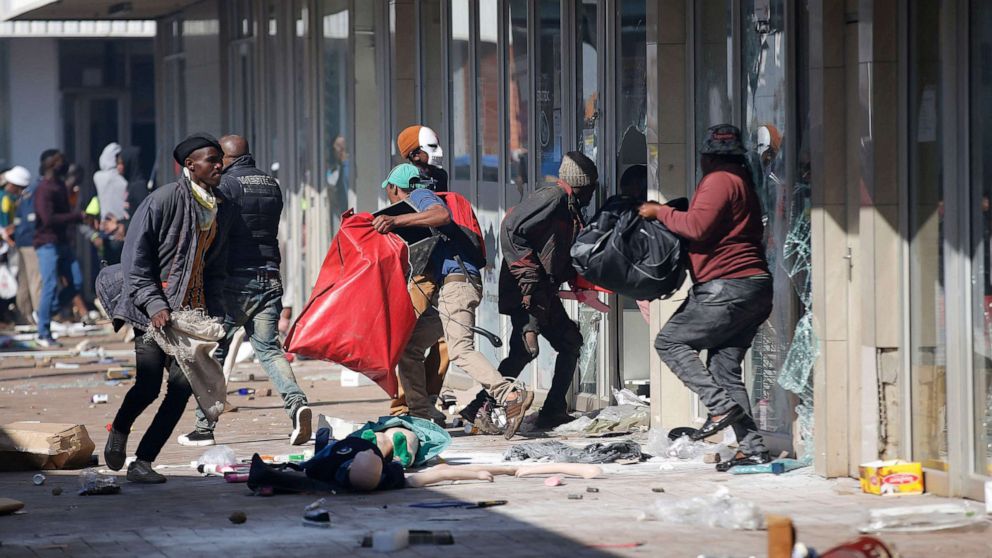 Against the backdrop of conflagration in South Africa, I offer positive commentary about the country of my birth. Do I need to provide a disclaimer before saying positive things about South Africa mid-riots?

Probablyâgiven that Iâm the author of a scathing, 2011âdare I say prescient?â indictment of the political dispensation forced upon South Africa by the âAnglo-American Axis of Evil.â

That dispensation is the “one man, one vote, one timeâ arrangement, to quote âInto the Cannibalâs Pot: Lessons for America From Post-Apartheid South Africaâ: “Democracy is especially dangerous in ethnically and racially divided societies, where majorities and minorities are rigidly predetermined and politically permanent.”

Thatâs what The West forced on South Africa.

For the last decade, Iâve seen South Africa as a sea of troublesâand a harbinger of things to come in America. When America becomes a majority-minority country, it will likely resemble South Africa.

But, in their darkest days, the country and its people need upliftmentâand have, surprisingly, earned it. I saw a rayânay, raysâof hope amid the revelry of looting, robbing and arson that has engulfed the provinces of KwaZulu-Natal and the Transvaal (my birthplace), following the conviction and jailing for contempt of court of former President Jacob Zuma.

Dozens have been killed in the two provinces mentioned, more than 200 shopping malls have been robbed then razed, and countless cattle have been stolen, which generally means sentient animals are being savagely hacked to death for food.

The courts issued a verdict that went against the wishes of a tribal faction of the South African population, and it erupted. I assure you, however, that Zumaâs loyalists, the Zulus, were not the only ones partaking in the bacchanalia. The dominant-party state ensconced with American imprimatur was once a variegated country of English, African and Afrikaner. For centuries, British, Boer and Bantu had been clashing and alternately collaborating on the continent.

Now, however, South Africa is an Afro-American multicultural society, united by an affinity for MacDonaldâs and mobile phones and a strict enforcement of progressive âthinking,â attendant speech codes and cancel culture.

South Africa has been made over in the image of America, and the outcomes are not good.

While the ruling African National Congress (ANC) was once largely composed of the Xhosa Bantu tribe, the Inkatha Freedom Party (IFP) was Zulu. I wager, though, that the Zulu minorityâs loyalties are no longer exclusively with its own IFP.

Largely Zulu and classically liberal (as in free-market oriented), the IFP had been inclined to cooperate with the defunct white National Party. For this, its leader, Prince Mangosuthu Buthelezi, was dismissed in the West as a puppet in Pretoriaâs blackface minstrelsy.

Rather than accommodate Zulu quest for greater autonomyâand, perhaps avert the current anarchic disintegrationâAmerica had demanded a strong centralized South Africa, with ANC revolutionaries at the helm. It got its wish.

The Afro-American multicultural society has prevailed in South Africa.

America: Donât look down on South Africa. It is quite likely that, had former Officer Derek Chauvin not been convicted for the murder of George FloydâAmerica would have erupted much as South Africa has. Our saving grace being only that the rioting cohort responsible for the âblocking of roads, looting, damage to property and burning of trucksâ forms a minority in the United States; a majority in South Africa.

In the US, reality and morality have been inverted. To the Democratic ruling party and its voters, a riot is really a peaceful protest. Crime is said to be the fault of a concocted abstraction known as systemic racism. Rising rates of murder, robbery, rape and home invasions, we are lectured, are exacerbated by guns, not goons. The more violent crime is committed, the less policing and punishment is deemed necessary by Democrats.

No such perverse sentiments have South Africans expressed during the riots, ongoing. Interviews conducted by BBC Newsâ Nomsa Maseko have revealed a rich seam of decency in ordinary South African men and women. All were united in condemnation of the criminality.

In the United States, a book âin defense of lootingâ was actually published. Its âthesisâ for theft âarguedâ that looting is âjoyousâ and can produce âcommunity cohesion.â Someone read this trash, endorsed its publication, edited it, set it in type, designed a cover, compiled an index, read the proofs, and gave it rave reviews.

No South African has offered such Democrat-style exculpation of evil.

Indeed, in 2020, America erupted in race riots. Cities across the republic were sacked, citizens left defenseless. The camera panned out across the country to reveal policemen and guardsmen caving.

Against the backdrop of âMad Maxâ-like dystopian destructionâa portend of things to comeâAmerican men in uniform all collapsed to the pavements like yogis to the command of their black tormentors. Bringing in the feds was a must since the protection of individual natural rights trumps federalism. However, while the national guard was galvanized, the cavalry was sent to race-riot hotspots to protect not the citizenry, oh no, but federal property.

As bad and as broken as my poor former homeland is, South Africaâs ruling elites came out with powerful declarations of shared moral values. There was no blame gameâno allusion to systemic racism. The system of apartheid was not conjured from the past as causality for criminality. Whites were not demonized as the Evil Other. Over 2000 criminals have hitherto been arrested and 117 killed, I imagine, some by cop. Five thousand soldiers are already on the ground.

As the July, 2021 riots in South Africa have shown, moreover, informal militia appear to have reconstituted. Armed, law-abiding South Africans, black and white, have formed “defense squads” to protect neighborhoods and businesses in Natal and the Transvaal. This warms the proverbial cockles and gives hope. After all, we fondly remember the Commandos, a private Afrikaner militia that had existed since the 1770s as the sole reliable defense at the disposal of South Africaâs farmers, and which was disbanded by the African National Congress.

Granted, President Ramaphosa has been a dismal disappointment. He has refused to forcefully get behind the nationâs white farmers. He has failed dismally to break the nexus of collusion and corruption between big business, big labor and big government.

Still, whereas riots make âSippy Cup Joe (Biden)â weep for the rioters and wail for police reform, not for policing the riotersâRamaphosa has sent a clear and moral message: âWe will stand as one people, united against violence, unanimous in our commitment to peace and to the rule of law.â

By the thousands, South African authorities have been arresting rioters, not right-wingers. Stateside, the Federal Bureau of Investigation is proceeding energetically not against our BLM domestic terrorists, but against Trump-voting Deplorables; hundreds of whom have been investigated and charged.

An idea that American media elites embraced, Ramaphosa has outright rejectedâit is that the criminality on display was a âform of political protest.â

ââ¦what we are witnessing now are opportunistic acts of criminality, with groups of people instigating chaos merely as a cover for looting and theft. There is no grievance, nor any political cause, that can justify the violence and destruction that we have seen in parts of KwaZulu-Natal and Gauteng.â

âThe culture of violence and lawlessness is evident now in the burning of trucks and vehicles, the destruction of property, looting and criminal attacks. How will the State react? South Africa cannot afford a slow response, particularly in the presence of a devastating pandemic.

Anarchy has been unleashed. I urge our President to take a firm stand. I know the responsibility upon his shoulders and I will willingly stand in support of any measures he takes to protect South Africa. But I also know that if he does not act now, and act decisively, all will be lost.

Our beloved country is aflame. We need to act.â

Ramaphosa has since deployed 25,000 soldiers to quell the unrest.

âFor everything there is a season under the heavens,â Ecclesiastes teaches. âA time to break down, and a time to build up.â

Now is the time to comfort, praise, and build the beloved country up.

Ilana Mercer has been writing a weekly, paleolibertarian think piece since 1999. Sheâs the author of Into the Cannibalâs Pot: Lessons for America From Post-Apartheid South Africa (2011) & The Trump Revolution: The Donaldâs Creative Destruction Deconstructedâ (June, 2016). Sheâs currently on Twitter, Parler, Gab, YouTube & LinkedIn, but has been banned by Facebook.