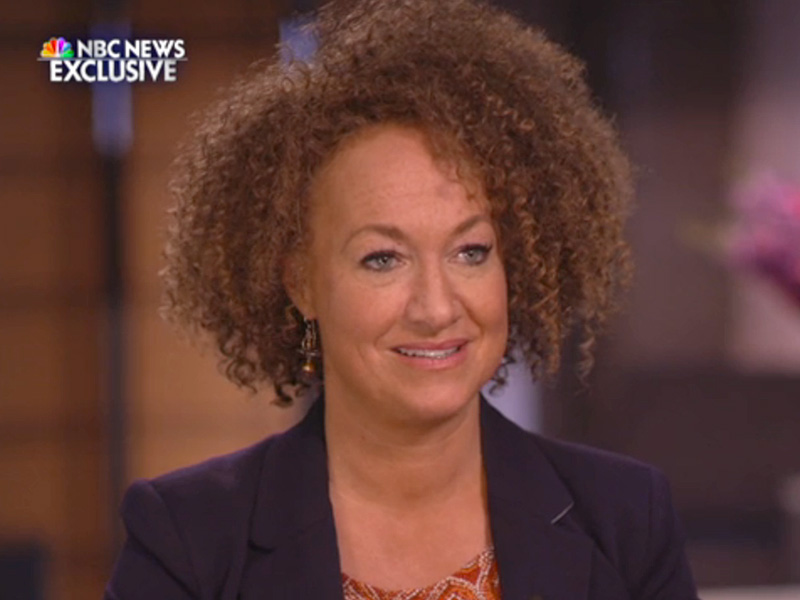 Not so fast, Rachel Dolezal. The country is not finished with you yet. It merely got distracted. We scampered in other directions: onto the âgenocidalâ Confederate flag and the depraved-heart murders of Freddy Gray (black) and Kathryn Steinle. More âBlack Lives Matterâ riots took place. Not one âWhite Lives Matterâ march was held. (And as one wag tweeted, Ms. Steinle didnât sufficiently resemble Barack Obamaâs daughters for him to give a damn.)

Since Dolezal dropped-off the radar, a lot has happened. Itâs safe to say, however, that everyone is still barking mad, forever poised to heap scorn on her fake Afro.

Dolezal, if youâre from Deep Space, is the lily white woman who dared to âidentifyâ as a black woman. The “Racial Industrial Complex” (a Jack Kerwick coinage) is populated with frauds, shysters, imposters, phonies, morons; black, white and 50 shades of gray.

Ms. Dolezal had been posing as all of these, teaching mambo-jumbo studies at the bush college of Eastern Washington University. Our American Idiocracy confers the respect and the authority of a pedagogue on many like her, allowing them to spread the disease to college kids and beyond.

The Age of the Idiot sees killers exculpated, just because they kill. As the reasoning goes, if an individual has murdered, raped, or is a feckless jailhouse whoreâthen he or she must have been abused, neglected, racially oppressed (if black or brown); not wealthy enough, mentally ill, lacking in self-esteem. Anything but plain bad, slothful, sociopathic or parasitical. The more aberrant the crime; the more thrill-seeking, vulgar, immoral or wicked the conductâthe more elaborate, fanciful and scientifically baseless the excuse-making.

In fact, around this if B then A, backward, erroneous reasoning, an industry has arisen. Itâs called psychiatry. The psychiatric endeavorâvoodoo, reallyâis premised on the medicalization of misconduct. The reason Ms. Dolezal has been denied the benefits of this excuse-making industry is that she has encroached on black supremacy’s turf. This protected turf acts as a medieval guild or a modern trade union. In cahoots with the state, the “Racial-Industrial Complex” protects its members from competition, by limiting entry into the professionally aggrieved class.

To be black, you see, is more than a pigment; itâs an identity, a politics, an entitlement, one-upmanship, a lifetime IOY (I Own You).

Poor Rachel painted her face orange, gave herself a Sideshow Bob hairdo, and adopted the ideology of the eternally oppressed. Big deal. Most of Americaâs authentic poseurs are phonies whoâve never been oppressed.

Unlike most blacks, Dolezalâby the admission of the president of the National Association for the Advancement of Colored People’s Washington-State chapterâhad done âquality workâ to âelevate the issues of civil rights.â

âI just want to feel beautiful, and this is how I feel beautiful,â the woman said rather plaintively. Yes, Dolezal is the white face of parental and societal displacement. Why am I the only one to find her pitiful, even deserving of pity?

In America, black is beautiful.

To be black is to be more righteous, nobler; carry the heaviest historic baggageâheavier than the Holocaustâand be encouraged to perpetually and publicly pick at those suppurating sores.

To be black is to have an unwritten, implicit social contract with wider, whiter society.

To be black it to be born with an IOY; it is to be owed apologies, obsequiousness, education, and auto-exculpation for any wrongdoing.

Why canât Rachel have some of that?

Was not Ms. Dolezal displaced for real in her parentsâ affections? Rachelâs story should begin with parents Larry and Ruthanne Dolezal, who adopted four children, âthree of whom were African-American while the other was from Haiti.â

Does this fashionable adoption not send a message to a vulnerable girl that she and her biological brother are too pale for their pious parents?

Spokesperson for the quasi-black Brady Bunch is Ezra Dolezal. Ezra grew up in the diversity worshiping, evangelical, Dolezal household. He now lectures his estranged sister about her shenanigans in black-face.

The once anemic-looking, fair-skinned Rachel was raised with a real sense that she was not black enough for her parents. Why do I say ârealâ? Because, like Angelina Jolie, Larry and Ruthanne Dolezal kept acquiring kids more colorful than their own.

Kids are needy creatures. Parenting is a complex endeavor. However great their reservoirs of love, sense of fair play and goodwillâtwo parents do not have enough of the good stuff to spread among six kids. Mark my words: Brangelinaâs beautiful, biological offspring will also one day display signs of childhood racial abuse.

Lest I be called on the carpet (or the mosaic floor, rather) for deploying the backward reasoning I previously deplored:

I am not here psychologizing Dolezalâs perplexing behavior. No need. By reality’s standardsânot those unscientifically set by the Diagnostic and Statistical Manual of Mental Disorders (DSM–â/eternity)âRachel was displaced. Dolezal has thus recreated the primal scene of her childhood by becoming in adulthoodâexperientially, at leastâblacker than her adopted brothers and sisters.

She deserves a break.