Itâs an even better idea than that of Eric Zemmour â an Algerian Jew of Berber origin â who is an outspoken defender of France. He says French should be the European Unionâs official language now that Britain has left. He points out that just two countries in the Union â Ireland and Malta â use English as official languages and both have their own languages. French, (almost the literal lingua franca) makes more sense as the Continental language than pidgin English. However, the Turkish article mentions a French official named Sundar Ramanadane, who goes one better and says the EUâs common language should be Latin. Why?

Mr. Ramanadane says there are other reasons why it should be Latin but he canât think of any more. I can.

Latin would not crush regional or national languages. It might help resurrect marginal tongues such as Gaelic or Breton. A âhighâ language of the bureaucracy and a shared culture would eliminate the need to learn âforeignâ languages. âForeignâ languages are just an acquired skill, not part of you. Latin wouldnât replace national languages, but would give Europeans a way to be part of a common family. In the Medieval period, educated men across the West could communicate easily with each other in Latin, even as decentralized aristocrats or burghers governed small regions and cities with local identities.

Latin would also be a barrier against Americanization. The American government poisons European culture. American military protection also lets the Europeans dodge responsibility for their own defense. It gelds them. Barriers between America and Europe would make the Continent stronger. It would force Europe to build institutions like a pan-European army. Almost anything that cuts off Washington is good for whites.

Latin would put European unification on the right track. Today, the European Union is a soulless, globalist behemoth, seemingly designed to destroy nations via mass immigration. Most of us supported Brexit and the ânationalistâ movements that defy Brussels. 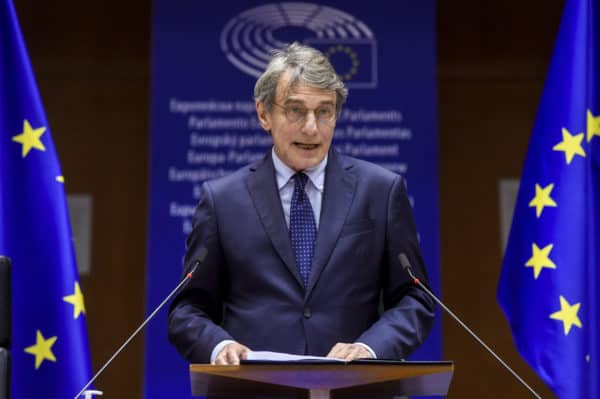 However, our greatest triumphs came when Europeans acted together. The national rivalries between Germany and France, the British effort over centuries to keep the Continent divided, and the destruction of the monarchies and traditional European institutions caused by fratricidal and futile conflicts must never be repeated. Our race will not survive another brothersâ war. Whites worldwide share a common destiny.

My problem with the European Union isnât that itâs too big or too centralized, but that it is an anti-European Union. German Chancellor Angela Merkel, invited practically the entire Third World to the Continent just a few years ago. Turkeyâs Interior Minister openly mocked the EUâs inability to deal with this self-imposed crisis. When statesmen tried to guard their nations from disaster, the EU threatened to punish them. The EU has tried to sanction Hungary and Poland, though both have, so far, held firm.

Today, the European Union is a bureaucracy whose buildings look like overgrown Apple stores. It seems almost determined to flee Europeâs past. The EU, and Europe generally, lacks an imperium, a principle of authority that directs people to set high goals and accomplish great deeds.

The EU tried to meet the COVID-19 pandemic as a bloc through vaccine autonomy. It failed. European nations including Hungary and Slovakia sought Russian vaccines. Post-Brexit Britain has been much more successful with its vaccination program than the bumbling Europeans

A weak, divided Europe cannot stand up to the United States. America is pressuring Germany to cancel a pipeline deal that would deliver Russian natural gas. The Cold War is over and there is no reason Europe should be hostage to Washingtonâs anti-Russian vendetta. Thereâs no reason for both Germany and Russia to suffer because the Potomac Regime seems to want another Cold War.

I think economic, geopolitical, and administrative needs will drive European unification. The British exit didnât weaken the EU; it may have strengthened it. Itâs yet another irony of history that the English fascist leader Sir Oswald Mosley, whose postwar motto was âEurope a Nation,â may posthumously see his goal achieved, but without England.

All of Western history since the fifth century has essentially been an attempt to recreate the Empire. Countless kings, emperors, and soldiers from Charlemagne to Napoleon and even pan-European divisions that died on the Eastern Front fought for this. Even though ancient Germanic tribes kept their freedom from Rome, later German kings would call themselves Holy Roman Emperors and the Second Reich was led by âCaesarsâ (Kaisers). Building a sacred empire has long been the goal of Western man. Signs at Wallsend Metro station are in English and Latin, as a tribute to Wallsendâs role as one of the outposts of the Roman Empire, as the eastern end of Hadrianâs Wall at Segedunum. (Credit Image: Chris McKenna/Thryduulf via Wikimedia)

Thereâs a reason our foes want to destroy or abolish the classics. In our most distant ancestors, we see who we really are. We understand that we have a proud identity and history. To learn about your past is a revolutionary act, as the late Jonathon Bowden said, and Latin is the path to our greatest traditions.

Who counts as âusâ in this scenario? The British voted themselves out. We Americans are even further removed from the Continent and are fighting to keep the United States as an outpost of Western Civilization. Iâve suggested that a revitalized monarchy and closer ties built on shared culture and language could preserve the Anglosphere, but I doubt it will happen. America is falling into a masochistic cult. The American Experiment has failed, and we need Europe as an impregnable fortress for our civilization.

The indigenous peoples of Europe â the white race â have a moral right to their ancient homeland and must remain a supermajority there forever. They must summon the will to reclaim it. Reviving Latin would be a first step towards an impossible dream, just as the Zionists realized their dream in Israel. We children of the European diaspora also need a strong Europe, free from âAmericanâ bullying.

I donât think most of those who want Latin to be the European language see the issue in racial terms. However, history has its own momentum. European nationalists donât want their countries to be overwhelmed by the Third World. European-Americans donât want that either, but we lack power. Our opponents attack us because of our race, and we must meet this challenge on racial as well as cultural terms. European nationalists in France, Holland, and Germany have more in common with each other than they do with their Muslim co-citizens. I live an ocean away, but I share a worldview with a European nationalist, not an âAmericanâ who canât wait to tear down George Washingtonâs statue and replace it with George Floydâs.

Perhaps a strong leader will save America from the top down, but a renewed, racially and culturally conscious Europe is more likely. Something akin to the Roman Empire â something that never really died within our collective soul â might emerge. Europe would have modern technology, a moral code of honor and greatness, hierarchy, and independence. To reverse Churchillâs famous phrase, the Old World, with its rediscovered power and might, could rescue and liberate the New.

On Gypsies
The EU interviewed 8,000 Gypsies, the results will shock you!
Guillaume Durocher
• 278 Comments • Reply