Noah Green
◄►Bookmark◄❌►▲ ▼Toggle AllToC▲▼Add to LibraryRemove from Library • BShow CommentNext New CommentNext New ReplyRead More
ReplyAgree/Disagree/Etc. More... This Commenter This Thread Hide Thread Display All Comments
AgreeDisagreeThanksLOLTroll
These buttons register your public Agreement, Disagreement, Thanks, LOL, or Troll with the selected comment. They are ONLY available to recent, frequent commenters who have saved their Name+Email using the 'Remember My Information' checkbox, and may also ONLY be used three times during any eight hour period.
Ignore Commenter Follow Commenter
Search Text Case Sensitive  Exact Words  Include Comments
List of Bookmarks

For months, the Capitol has looked like the American embassy in the Green Zone in Baghdad. A few weeks ago, I walked around the heavy barriers and saw countless signs from residents pleading for them to be taken down. Washington DC votes overwhelmingly Democrat, but yard signs suggest residents donât want to live on something that looks like a military base. 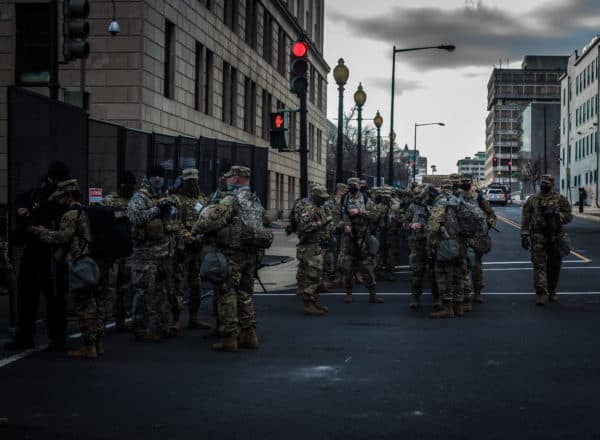 The January 6 riots were the justification for this show of force. Many journalists spun them as a âwhite supremacist armed insurrection.â Though some rioters attacked police, no police were killed. Officer Brian Sicknick, whom rioters assaulted, died soon afterward, but itâs not clear what caused his death. CNN said prosecutors are having a hard time building a murder charge.

The same federal government that lazily presided over a massive nationwide crime wave is very harsh with the January 6 protesters. Federal prosecutor Michael Sherwin openly bragged that the federal government is trying to âensure there was shock and awe that we could charge as many people as possible before [January] 20th [Inauguration Day].â

An officer shot an unarmed white woman, Ashli Babbitt, on January 6, but faces no charges. Media are careful not to name him, unlike Derek Chauvin or Darren Wilson. Conservatives have mostly ignored Babbitt; leftists gloated. President Trump hasnât said the name of the woman who died for him.

Many journalists predicted more attacks from imaginary white nationalists, so fortifications had to go up. On Friday, it seemed the fearmongers were right. A suspect drove into the barricade around the US Capitol, killed Officer William Evans, got out swinging a knife, and was shot dead. This was briefly the most important story in the world. When it turned out the killer was Noah Green, a black supporter of the Nation of Islam and that Officer Evans was white, the story vanished. Democrats including Barack Obama, Keith Ellison, and several members of the Congressional Black Caucus have either met with Nation of Islam head Louis Farrakhan or even worked closely with him. Thereâs no reason why they shouldnât if they want to represent other blacks; half of black America supports Louis Farrakhan.

A few years ago, the FBI identified âBlack Identity Extremistsâ as a possible threat. In response, the Intercept, the ACLU, Foreign Policy, and other organizations and publications denied the âBlack Identity Extremistâ threat. The FBI dutifully abandoned the term in 2019, but you can buy a T-shirt with the phrase on it if you want to thumb your nose at whitey.

The Southern Poverty Law Center recently said black separatists and white haters wonât be counted as âhate groupsâ because itâs natural for black people to hate us. Another reason it ended its âBlack Separatist listings;â it didnât want to be âhelping to aid the FBI in its definition of Black Identity Extremists.â

The alleged attacker said the federal government was the â#1 enemy of Black People,â an amazing charge given that blacks enjoy special privileges. After months of warnings about âwhite nationalistsâ gearing up to attack the Capitol, you might think an actual attack by a supporter of a black nationalist organization and self-proclaimed opponent of the federal government might get some notice. Youâd be wrong.

I havenât seen any calls from media or anti-racist groups for scrutiny of the Nation of Islam or other black separatists. There is no deplatforming. I havenât seen any calls for the FBI to start investigating âBlack Identity Extremistsâ again. No one will be held accountable other than the suspect. Acting Metropolitan Police chief Robert Contee (a black man) said the very same day of the attack that it âdoes not appear to be terrorism related.â The New York Times said the motive âremains unclear.â

Even Senator Ted Cruz sees how this works.

Suddenly, like the recent shooter in Colorado, this lunatic is going to magically disappear from the news.

If a depraved murderer doesnât fit the woke narrative, he doesnât exist. https://t.co/fBetdwl6gc

This story would not have vanished if the shooter had been white. Clearly, many people had their scripts ready to go. A show producer involved with several programs on Netflix and Amazon:

Without having the slightest clue about the "security incident" at the Capitol, I'ma go ahead and call white nationalist terrorism on this one.

A podcaster and former Vogue contributor:

ah, so they were white. https://t.co/ubJ4Eux2pi

As it turns out, I am the Real Racist against white people ð Whatever shall I do ððð

So it was a white Trump supporter? https://t.co/Tub6mOkuUm 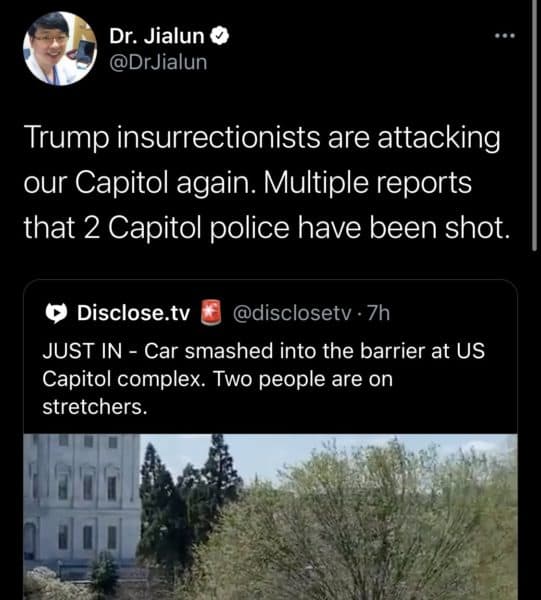 That last account is especially interesting. âDr. Jialunâ had few followers but got a verified checkmark. The account has since been suspended. It may have been a bot. American Renaissance canât have any kind of account.

What I find most fascinating about these posts and others like them is the assumption that the media would not publicize these incidents as âterrorismâ if the attacker were white. This is completely wrong. However, I donât doubt the sincerity of these people. They are living in a fantasy world that Twitter and other social networks censor have built for them. They are rarely exposed to different perspectives. Given progressivesâ near total control of media power, we have no choice but to hear their voices every time we turn on the TV or the computer.

You may be just as frustrated by the double standards as we are, but there is good news. The Supreme Court recently declared a lawsuit over President Trump blocking certain Twitter users as moot. However, Justice Clarence Thomas wrote a 12 page concurring opinion arguing that social media giants could be considered âcommon carriers.â

Todayâs digital platforms provide avenues for historically unprecedented amounts of speech, including speech by government actors. Also unprecedented, however, is the concentrated control of so much speech in the hands of a few private parties. We will soon have no choice but to address how our legal doctrines apply to highly concentrated, privately owned information infrastructure such as digital platforms. . . If part of the problem is private, concentrated control over online content and platforms available to the public, then part of the solution may be found in doctrines that limit the right of a private company to exclude.

This is a rationale for Republicans in Congress to act against Big Tech. Considering the GOPâs sorry track record, I donât expect much, but if there are any Republicans in the House or Senate looking to make a play for the 2024 nomination, the field is open. Iâm looking at you, Senator Hawley.

What John Robb of the Global Guerrillas website calls âcorporate alignmentâ is well underway. It is a softer version of the National Socialist policy of Gleichschaltung (co-ordination), making sure all major institutions have one ideological line. In our society, that ideology isnât about supporting the majority population, but demanding its abolition in the name of âanti-racismâ and âequity.â The historic American nation is begging for a champion to fight corporate power now that President Donald Trump is gone.

Who will step forward? The survival of the United States as an outpost of Western Civilization hangs in the balance.

We Donât Have a Gun Problem. We Have a Race Problem.
Jared Taylor
• 331 Comments • Reply

Black Crime: Why Our Rulers Hide It
Jared Taylor
• 281 Comments • Reply
← All the Crime Fit to IgnoreCoordination and Decomposition →
Hide 12 CommentsLeave a Comment
"Verified Hate: Black Nationalist Attack on the Capitol"
• 12 Comments
Commenters to Ignore
Commenters to ignore (one per line)

← All the Crime Fit to IgnoreCoordination and Decomposition →
Current Commenter
says:
Current Date at Time Now
Leave a Reply - Comments on articles more than two weeks old will be judged much more strictly on quality and tone
Cancel Reply
Commenting Disabled While in Translation Mode