âLe 20hâ nightly news on TF1 set the tone for the nation.
◄►Bookmark◄❌►▲ ▼Toggle AllToC▲▼Add to LibraryRemove from Library • BShow CommentNext New CommentNext New ReplyRead More
ReplyAgree/Disagree/Etc. More... This Commenter This Thread Hide Thread Display All Comments
AgreeDisagreeThanksLOLTroll
These buttons register your public Agreement, Disagreement, Thanks, LOL, or Troll with the selected comment. They are ONLY available to recent, frequent commenters who have saved their Name+Email using the 'Remember My Information' checkbox, and may also ONLY be used three times during any eight hour period.
Ignore Commenter Follow Commenter
Search Text Case Sensitive  Exact Words  Include Comments
List of Bookmarks

In previous articles, we have seen how French pollster JÃ©rÃ´me Fourquet in his The French Archipelago has statistically documented the rise of social liberalism, the growing presence and character of Muslims, and the general decline of shared identity in France.

Another crucial phenomenon is what Fourquet calls âthe cultural, geographical, and ideological secession of the [French] elitesâ (p. 94). On the one hand, there is a certain retrenchment as French elite media have reduced influence and reach on the general population, on the other the elite is seeking to emancipate itself from the constraints of the people, evidenced by flight into gentrified neighborhoods, private schools, and outright expatriation.

The decline of the mainstream media

There has been a steady decline of French mainstream media over the past years. The television station TF1 used to enjoy a hegemonic share of 45% of viewers in 1988, falling to a mere 20% in 2017 (p. 80). News broadcasts, entertainment, and sporting events on TF1 meant âa very large part of the population experienced the same thing at the same timeâ (p. 79). Conversely, increased media pluralism has meant a decline in social consensus as âthe leading mass media, with their large audiences, participated in the creation of a common and shared view of the worldâ (p. 79).

The national newspaper Le Monde, has declined from selling 408,000 issues in 2002 to 300,000 in 2016, though if anything this does not seem too severe given the rise of online news consumption. Various magazines have similarly lost between 15% and 30% in sales. This change has put print publications under enormous economic pressure by no means made up for by meager online advertising revenue. Mass layoffs of journalists have been a frequent occurrence.

Fourquet warns that we are on the cusp of even greater changes for the media, again citing the young: âthe media and news landscape which is maintaining itself with difficulty risks being completely transformed within 15 years, when the generation of Baby Boomers, which make up the last bloc of readers of the press and watchers of historic TV channels, will have passed awayâ (p. 82).

The practical result of greater media pluralism is a decline in social consensus. Elites live more and more in their own reality defined by legacy media that resonate emotionally with them. The lower classes are increasingly defecting and being subject to entropic variation (allegedly, about a third of French youths believe in âchemtrailsâ and weather-control programs [e.g. HAARP], p. 83). 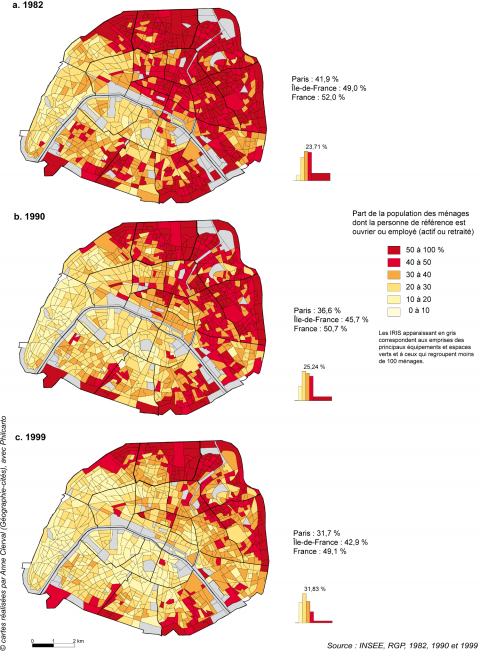 Share of people in Paris who are workers or non-managerial employees.

City-centers have become gentrified with high property prices. In the 1980s, workers and non-managerial employees typically made up around 55% of residents in cities like Lyon, Toulouse, Strasbourg, and Nantes. Today, they make up only around a third, having been replaced by urban professionals (p. 99).

Social inequalities are also evident in the growing popularity of private schools. In France, private schools essentially mean Catholic schools and used to be attended not so much because of class divides but because of religious preference. Now, wealthy people are more over-represented in the private school system, anxious parents doing what they can to escape the declining public schools. This phenomenon is most severe in the major cities such as Paris and Marseille, where vast swathes of the public student body has been Afro-Islamized.

Franceâs new black or Muslim inhabitants are generally less sensitive to issues of anti-Semitism or the sanctity of the holocaust. Bullying of Jews by Muslims is supposed to be so widespread that it is said that there is not a single Jewish pupil left in the public schools of Seine-Saint-Denis, the vast Afro-Islamic-majority county making up the northeast corner of greater Paris. Two thirds of Jewish parents who opt to send their children to Jewish schools say they fear their child will be attacked for being Jewish (p. 212).

The share of students from poorer families has collapsed in Franceâs elite schools. The famous Ãcole nationale dâAdministration, the Haute Ãcole de Commerce (the top business school), and other elite schools have seen the share of lower-class students fall from 29% in 1950 to 9% in the 1990s. Today, children of managers and members of the upper classes make up 85% of students (p. 102). Whether this is due to cognitive stratification or nepotism, elite and working classes are more and more separated.

Besides the wealthyâs increasing self-segregation in their own physical and media spaces, Fourquet points to the disappearance of many common experiences between the classes. Cheap colonies de vacances, basically summer camps, used to be one such experience which has since fractured: the rich now opt for expensive specialized experiences (horse-riding . . .), the poor may get cheap and cheerful subsidized offers from their municipalities, and the middle class is increasingly foregoing the experience altogether.

Until 2002, young French men performed military service regardless of social class (contrary to perception, the upper classes did not serve significantly less than the general population, p. 103). Macron is the first president of the French Fifth Republic to have not fulfilled military service.

The most radical phenomenon of elite secession is expatriation, with Franceâs educated and wealthy classes going abroad for better work opportunities and/or lower taxes. In 2002, 385,000 French were registered as living abroad. By 2017, the figure was 1,264,000, more than tripling over just 15 years (p. 360). Great Britain, Switzerland, and Luxembourg are popular destinations, each of which have lower taxes, particularly for high earners.

Whatâs more, 16% of French engineers now work abroad, twice as many as in 2000 (p. 116). Many of these may be permanent expatriates and not engineers on a temporary mission abroad.

More generally in Europe, the Erasmus student exchange program has been a massive enabler of brain drain from peripheral Europe to wealthier countries in northern Europe. The program has clearly contributed to the deracination of young educated Europeans.

Belgium, as a partially French-speaking country with low taxes on certain forms of wealth, is a popular destination for tax exiles. A few prominent examples include: the actor GÃ©rard Depardieu (though he recently sold his home there), television personality Arthur, Bernard Arnault (owner of the LVMH fashion company), and many members of the Mulliez family (owners of major retail chains Auchan, Decathlon, Leroy Merlinâ¦). Around 50 of Switzerlandâs richest 300 residents are French (pp. 113-4).

Macronâs powerful but limited base

Fourquet persuasively argues that the physical and cultural secession of the upper echelons of French society was a crucial factor in enabling the election of the centrist-globalist Emmanuel Macron to the presidency. He observes: âA symptom of the magnitude of this exodus of French vital forces and wealth is the fact that electoral candidates now do the circuit of foreign capitals to raise fundsâ (p. 352). During the 2017 presidential campaign, Macron went to London six times to raise funds among French expats, many of whom worked in the City, and expats in expensive destinations overwhelmingly voted for him (San Francisco, Washington DC, Montreal . . .).

During the campaign, early support for Macron correlated with the amount that people paid for property tax, on which he had specifically proposed a tax break. More generally, the single best predictor for support for Macron is educational achievement, with the less educated conversely tending to support Marine Le Pen and/or the Yellow Vests. France is cognitively, temperamentally, and economically stratified between âopen-winnersâ and âclosed-losersâ (p. 272), or âpeople of anywhereâ and âpeople of somewhere.â

Macronâs party, La RÃ©publique en Marche (âThe Republic on the March,â LREM), managed to win a majority of seats in the National Assembly. These new representatives were often politically inexperienced and featured an unprecedented proportion of women and ethnic minorities. However, despite a campaign oriented around âparticipatory democracy and closeness to citizens,â LREMâs representatives are more elitist than ever: 69% of members of the new parliament are from the upper classes, with a marked decline in middle-class representation (p. 365). 81% of LREM party members are university graduates, as against only 28% of the general population (p. 368). What a telling example of the Iron Law of Oligarchy!

Macronâs representatives have often had a rough start in public life. One complained on the radio that the French only talked about low wages and lack of purchasing power. One female representative complained that her parliamentary pay was lower than what she had received in the private sector and that she and her peers were âunsure whether they would make it to the end [of their term].â Macron has been widely criticized as âthe president of the rich.â

Macronâs success reflects the top ~20% of France consolidating as a cultural and electoral bloc. However, predictably, his particular globalist message could not lastingly resonate beyond this core group. We see similar phenomena in other countries when the European Union has parachuted globalist prime ministers, as we saw with Mario Monti in Italy and Dacian CioloÈ in Romania: the globalist government simply lacks the appeal to govern alone in an officially democratic system. These governments collapse soon enough, but their core constituency may consolidate politically around ~10-20% of the electorate (represented by the Social-Democrats in Italy and USR-PLUS in Romania).

Macron has wisely broadened his message beyond the originalities of his liberal-globalist campaign. He now voices characteristically French quasi-protectionist concerns and has turned into the gyrating âpresident-of-all,â making contradictory statements and taking various measures to simultaneously appeal to the growing woke constituency and to the basically center-right inclinations (at least on security and identity) of the great mass of French voters. To cite only one recent example among many: Macron simultaneously warns against importation of woke American culture wars and recently told an American media that France needs to âdeconstruct its historyâ to become more amenable to blacks and Muslims. Time will tell if this pays off in 2022, as of today the election is his to lose.

All these structural and political tendencies do not bode well for France. The internal fracture is unlikely to be overcome. The phenomenon of expatriation is serious and novel. Whatever people say, the smart fraction contributes disproportionately to a countryâs economic organization and technological prowess, which in turn are fundamental underpinnings of national power.

Admittedly, France continues to attract large numbers of educated professionals from southern and eastern Europe, and many of these French expats are not âlost to Europeâ insofar as they find productive employment in neighboring countries. Still, as things stand today, the decay of the much-maligned French nation-state is hardly compensated by the emergence of an Europe invertÃ©brÃ©e. The Gilets-Jaunes, or the Contradictions of Consumer Democracy
Guillaume Durocher
• 94 Comments • Reply
← Bumbling Towards the BiosingularityThe French of Quebec →
Hide 119 CommentsLeave a Comment
"The Secession of French Elites"
• 119 Comments
Commenters to Ignore
Commenters to ignore (one per line)

• Thanks: The Real World
• Replies: @Irish Savant, @Curle
← Bumbling Towards the BiosingularityThe French of Quebec →
Current Commenter
says:
Current Date at Time Now
Leave a Reply - Comments on articles more than two weeks old will be judged much more strictly on quality and tone
Cancel Reply
Commenting Disabled While in Translation Mode