Improvised migrant accommodation in Paris, near Stalingrad metro station. Source
◄►Bookmark◄❌►▲ ▼Toggle AllToC▲▼Add to LibraryRemove from Library • BShow CommentNext New CommentNext New ReplyRead More
ReplyAgree/Disagree/Etc. More... This Commenter This Thread Hide Thread Display All Comments
AgreeDisagreeThanksLOLTroll
These buttons register your public Agreement, Disagreement, Thanks, LOL, or Troll with the selected comment. They are ONLY available to recent, frequent commenters who have saved their Name+Email using the 'Remember My Information' checkbox, and may also ONLY be used three times during any eight hour period.
Email Comment Ignore Commenter Follow Commenter
Search Text Case Sensitive  Exact Words  Include Comments
List of Bookmarks

Le Monde has an interesting article on Parisian social housing policy which is quite indicative of how quaint official French thinking is on immigration-gentrification-segregation-inequality-cum-terrorism:

Following the terrorist attacks of January 2015, the President of the Republic, FranÃ§ois Hollande, gathered several interministerial committees, announced a series of measures in to promote social cohesion, and managed to get these approved by Parliament. The goal was notably âto break up social apartheid in housing,â as explained then-prime minister Manuel Valls. Passed in January 2017, this law on equality and citizenship was the last major text of the five-year Socialist mandate.

Three years later, this projectâs flagship housing measure is not being respected in Paris . . . The relevant âanti-ghettoâ measures aim to increase the number of poor families in rich neighborhoods âso that poverty is not always concentrated in one area.â To achieve this, the law stipulates a clear rule: when social housing is granted in âregularâ neighborhoods â those outside the âurban policy priority neighborhoodsâ [i.e. those inhabited by the poor/minorities] â social landlords must reserve at least 25% of housing to low-income households (â¬810 per month and per person as of 2019).

And yet, in Paris the mandatory quota of 25% is not at all being reached, even though it is a city run by the left, for which social integration is a major priority. Of the 23,332 housing units granted over three years outside of the poor neighborhoods, only 2,234 or less 10% have been granted to the lowest-income households. Worse: instead of progressing towards achieving the lawâs objective, the rate is declining. From 11% in 2016, it fell to 10% in 2017 and less than 8% in 2018. . . .

âItâs true that we have to make efforts to reach the 25% target,â conceded Ian Brossat, the communist deputy-mayor in charge of housing on behalf of the mayor, Anne Hidalgo. . . .

By the way, the Socialist Anne Hidalgoâs close collaborators include not only communists but also the avowed Zionist Patrick Klugman. As vice-president of the SOS Racisme and president of the Union of Jewish Students of France (UEJF), Klugman has had a prominent role in the judicial harassment and persecution of French patriots and the promotion of multiculturalism in France, all the while being an ardent supporter of Jewish ethno-nationalism in Israel. Hidalgoâs team is quite representative of the deathly global elite ruling the West. Official City of Paris Website: typical AWFL-Occupied-Government, including the notorious Ã©criture inclusive (âinclusive writingâ), which writes words in simultaneous masculine/feminine form, even though it is literally unpronounceable. This is an important symbolic and psychological marker: the willingness to make the French language uglier in order to have fictitious equality.

Hidalgo is failing to integrate the poors because there isnât enough cheap social housing in hyper-gentrified Paris proper. The idea is to massively distort the housing market by providing apartments costing â¬6-7 per square meter, whereas the average in Paris proper is â¬32 per square meter. Naturally, those middle class people who win the social-housing lottery by getting a dirty-cheap apartment in central Paris arenât particularly keen to move out for the sake of the poors.

Incidentally, â[t]he law does not include any sanctionâ for failing to fulfil this particular unfunded mandate.

City Hall is however pleased with one result on social integration. To prevent ghettos, the same 2017 law has fixed a second quantified goal: that in âurban policy priority neighborhoodsâ at least half of social housing must be granted to households with income greater than â¬800 per month. This objective has been reached and, even, surpassed.

So as the government is trying to shove poors into expensive areas, it is also trying to put middle class people into poor areas. Assuming enough middle class people move in, the area can then be properly gentrified and the poors removed, along with the social problems associated with them.

What a complicated and pointless game of whack-a-mole. Trying to simultaneously diversify and equalize a society is like trying to mop the floor before turning off the tap. I am sure you have better analogies, please share in the comments. 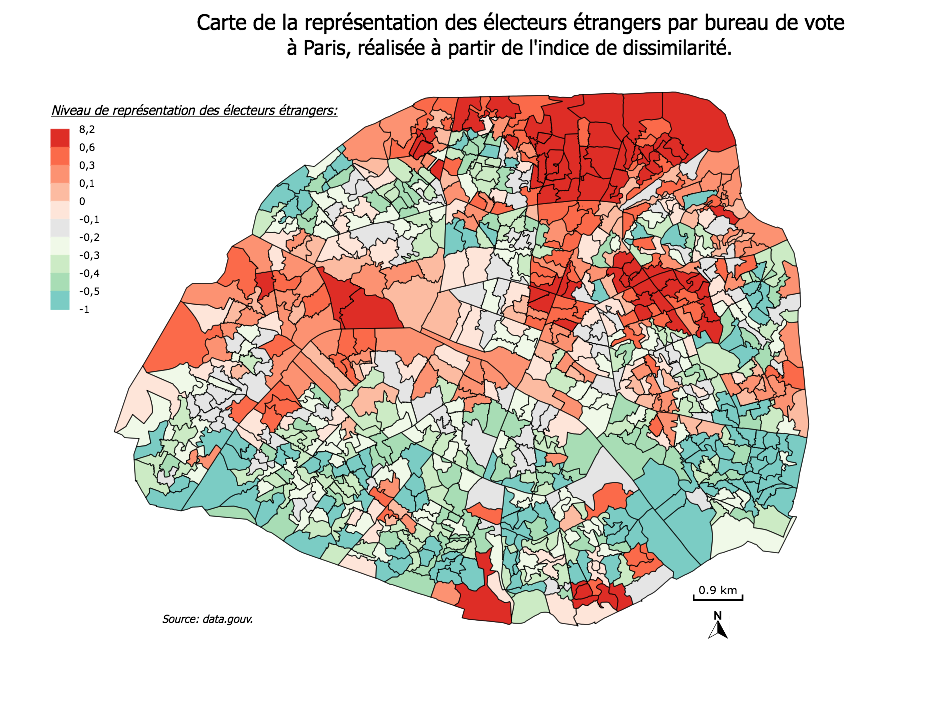 The fragmentation and stratification of French society along class and ethnic lines has become a widespread subject of discussion in France.

In all the somewhat mixed neighborhoods of the capital, the cultural and social melting-pot, of which Parisians are so proud, is being transformed â in the area of education â into a complex mosaic of white, black, or more or less mixed schools. In the majority-black schools, which are often socially and educationally underprivileged, left-wing white parents are faced with a difficult dilemma: to respect their principles by sending their kids to the local school or do what the vast majority of their peers now do by sending them to private schools.

In Marseilles, Franceâs second-biggest city with almost 900,000 inhabitants, there is a similar situation. A recent study on âSchool Socio-Spatial Segregation and Ethnicization in Marseilleâ found that half of school students (mostly white) have opted out of the public school system, with its mostly black and Muslim pupils, in favor of private schools.

As usual, we donât have good ethnic statistics for Paris or France in general. Here however is an ethnic snapshot of Brussels, a Belgian francophone city of some 1 million people, which though much smaller has a very similar situation in terms of ethnic segregation and inequality: âSegregation is present in Brussels. Foreigners from North Africa [pink], Turkey [yellow] and EU15 (15 first members of the European Union [blue]) are living in opposite regions of the city.â (source)

According to egalitarian theory, there should be a steady equalization of living conditions and gradual blending of the races into a homogeneous whole. What we see, however, is more in line with the hereditarians and ethnic realists expect. After all, race is cerebral cortex deep and, if possible, people like to live among people like themselves. We can expect that populations will continue to residentially cluster along ethnic lines and stratify according to their natural ability and inclinations, in a pattern we see in every single âglobal cityâ from Los Angeles to New York to London to . . . Paris.

Justifying French withdrawal from Algeria, President Charles de Gaulle argued that Europeans and Arabs would never gel into a harmonious whole: shake the bottle, the oil and vinegar inevitably separates. De Gaulle did not however bother to take the corollary precautionary measures of preventing Algerian, or wider African, mass migration to France.

The French State is also following the usual pattern of thinking the problems accompanying Non-Asian Minorities can be addressed by sprinkling them evenly among (white) middle and upper class neighborhoods. But what will happen when we run out of the latter? While every Western government is making some effort to brain-drain the rest of the world, no one seems to be taking the more far-sighted and public-spirited measure of actually increasing the supply of gifted and functional people (or, heaven forbid, decreasing the supply of dysfunctional and stupid people).

Perhaps, in time, France will adopt more aggressive and explicit forced racial integration policies, Singapore-style, instead of using thumb-in-the-air income-level proxies. âBrazilianizationâ would be the best-case scenario for such a hubristic plan of social engineering. I donât think itâs impossible the Maghrebis, in particular, could become the functional equivalents of Mestizos. French offices are full of functional and secularized Arabs, from sassy homosexuals to alluring Arabesses who have abandoned their mothersâ headscarves in favor for a Jersey-Shore-type look. Time will tell if Islam will dissolve as Christianity has or, simply by existing, will conquer a nihilist Europe which has lost the will to live.

In our global cities, people have precious little in common. Members of different ethnic groups increasingly donât share the same schools, the same neighborhoods the same television viewing, the same Internet use, the same jobs, or even the same language. The residents are united by nothing except their passport â a mere administrative formality â and the supermarkets *.

The French Stateâs latest efforts at first integration were in part prompted by Islamist terrorism. We can foresee that ethnic segregation and inequalities will persist. Frustration and anger will naturally stem from this, periodically resulting in the mass murders we saw at the Bataclan concert, on Niceâs Promenade des Anglais, and many other places in France.

* Actually, I am being too generous: it is well known that the poors will go to cheaper supermarkets while the yuppies will go to overpriced niche organic boutiques. Still, most people will be happy to frequent Carrefour.