Three years after Parisâ Notre Dame burned on April 15, 2019, with needless to say still no word on the culprit, France must again, as in 2017 have to choose between flawed immigration patriot Marine Le Pen and Establishment globalist Emmanuel Macron. Their much-anticipated debate is on Wednesday April 20. The Brussels bureaucracyâs sudden allegation against her of campaign finance irregularities has been widely derided

I doubt that Madame Le Pen's hopes have been dealt a blow. This is not the first time that courts or regulatory bodies have launched charges against her, sometimes very inconveniently. Many voters will see it as proof of the Euro-establishment's determination to suppress critics. https://t.co/gv5J8OQjos

and there are some Establishment media worries about a Brexit/ Trump-style upset [Macron’s struggles with young voters leave an opening for Le Pen by Ivana Saric, Axios, April 18, 2022]

Perhaps Le Pen wonât make it, this time. But, compared to 20 years ago, France is clearly on the move.

There was much to parse in these first-round election results. There is no question that radical immigration patriot Eric Zemmourâs final result, 7% of the vote, was deeply disappointing, at least to me. Le Pen received 23.15 %. There are a number of reasons for this score, not least the âstrategic votingâ (vote utile in French) of perhaps one third of Le Pen voters, who voted for her to prevent a Leftist candidate from reaching the second round.

âseeing the candidates of the two parties, … who have governed France for 60 years and co-managed the coutryâs decline, getting less than 7% of the vote gives me, I admit, some perverse pleasure.â[Twitter, April 15, 2022, my translation]

The Socialist candidate was already a non-entity in the 2017 election. This year, however, the Establishment Conservatives candidate, Valierie Pecresse also received less than 5% of the voteâwhich crucially means that the government will not reimburse her campaign spending! PÃ©cresse was reduced to pleading for donations to make up the 7 million Euro loss, 5 million Euro of which she had obtained through personal loans.

Thus the two traditional parties of France (= Democrats and Republicans), while still powerful in local and regional politics, are irrelevant so far as national politics are concerned.

Macron rules on the basis of a hegemonic center while all opposition has concentrated around two irreconcilable âextremesââthe Left around MÃ©lenchon; the Right around Le Pen.

MÃ©lenchonâs triumph on the Left is suggestive of the racialization of French politics. in the major cities, white neighborhoods voted Macron while black/Muslim ones voted MÃ©lenchon: 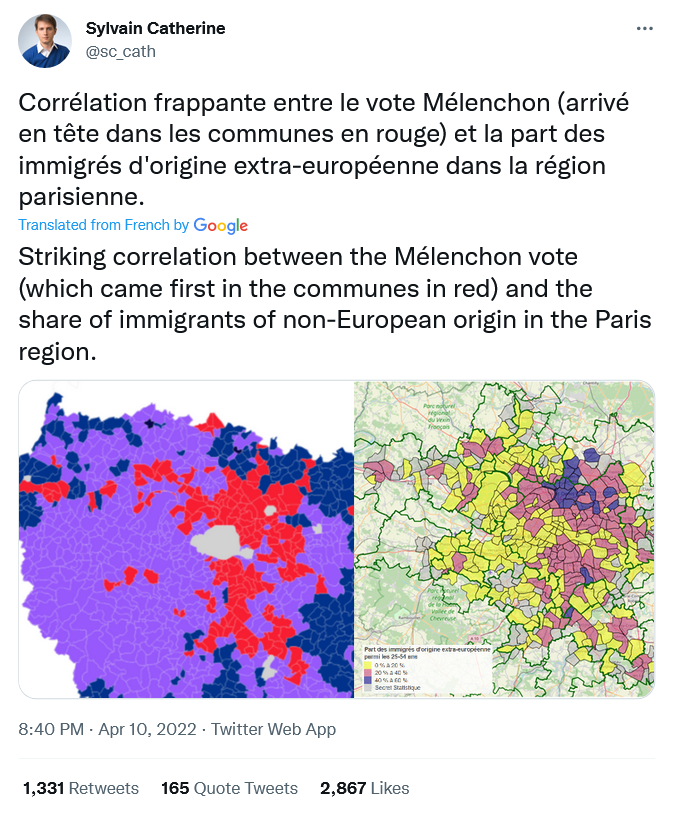 Damien Rieu, a social media maven who has joined Zemmourâs Reconquest party, declared the election had seen âthe eruption of the ethnopolitical [and] electoral communitarianism, the first step towards [becoming] Lebanon.â

Indeed, it seems that around 70% of Muslims voted MÃ©lenchon and 40% of his voters were Muslim. Tellingly, 45.8% of prisoners who voted cast for MÃ©lenchon, twice the national average. This is highly suggestive of the ethnic composition of French prisons. 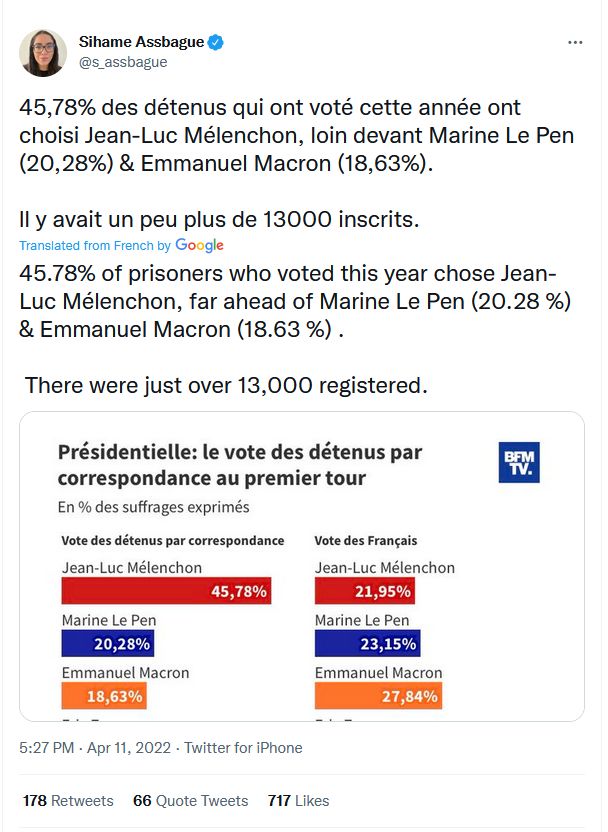 MÃ©lenchon, who had spent his whole career as a die-hard secularist, is now embracing his increasingly colorful electorate. While denouncing the very idea of a âGreat Replacement,â he tells his activist supportersâwho are still mostly elderly white boomersâabout the glories of âcreolizationâ in the mixed-race France of the future. [Qu’est-ce que la crÃ©olisation, nouvel Ã©tendard de Jean-Luc MÃ©lenchon? by Vincent Bresson, Slate.fr, October 1, 2021] He no longer opposes the wearing of Islamic headscarves by university students, something he used to condemn as a sign of archaic patriarchal culture. His laÃ¯citÃ© now basically boils down to a rabid hostility towards Christianity.

But curiously, Le Pen and MÃ©lenchon both did well in Franceâs majority-black and mixed-race overseas territories (French Guiana and several islands in the Caribbean and the Indian Ocean). This was essentially motivated by a desire for handouts (Le Pen and Zemmour both have voiced strong emotional attachment to these territories as the last vestiges of France as an intercontinental empire) and, significantly. the fact that some of these territories face huge amounts of illegal immigration from Latin America and Africa.

Indeed, there have been amusing cases of local black women protesting against pro-migrant NGOs run by well-thinking white women. NazBol FranÃ§afrique when?

In Le Penâs speech reacting to her qualifying for the second round,, she declared France would have to choose between Macronâs vision of âdivision, injustice, and disorderâ for the benefit of âthe few,â and her own vision:

The unity of the French around social justice, protection, guaranteed by the fraternal framework around the millennia-old idea of the nation and of the people

Patriots like me regret that Le Pen has soft-pedaled nationalist themes, especially immigration, to focus on essentially statist protectionist economics. Large swathes of her discourse are scarcely distinguishable from that of a Social-democrat. 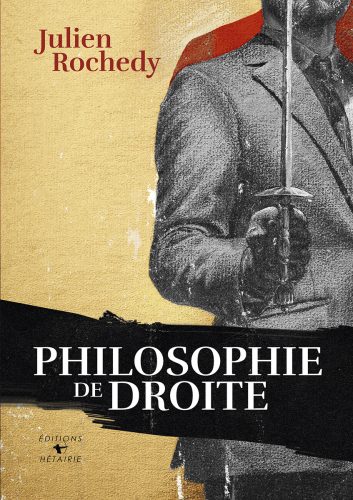 But identitarian thinkers like Julien Rochedy [Tweet him]and FranÃ§ois Bousquet have conceded that, in purely electoral terms, Le Pen may well have been right to focus on bread and butter issues. Macron is an embattled president whom vast swathes of the electorate loathe for his failure to bring positive change, his authoritarian reaction to the yellow-vest protests, and his totalitarian management of the COVID crisis[Macron declares his Covid strategy is to âpiss offâ the unvaccinated, by Jon Henley, Guardian, January 4, 2022].

While Le Penâs (relatively) pro-Russian stance has proven embarrassing in light to the general emotional reaction to the war in Ukraine, the spikes in the cost of fuel, energy bills, and inflation in general may strengthen her position in the long run. Remember that the massive Yellow-Vest protests were sparked by a fuel tax hike.

Significantly, Zemmourâs supporters were more educated, often in white-collar and management positions, and were more motivated. They are concentrated in the prosperous southeast of France, where there are many retirees and a few descendants of the European settlers who fled Algeria. But he even had a few supporters within some of the wealthier neighborhoods of Paris. 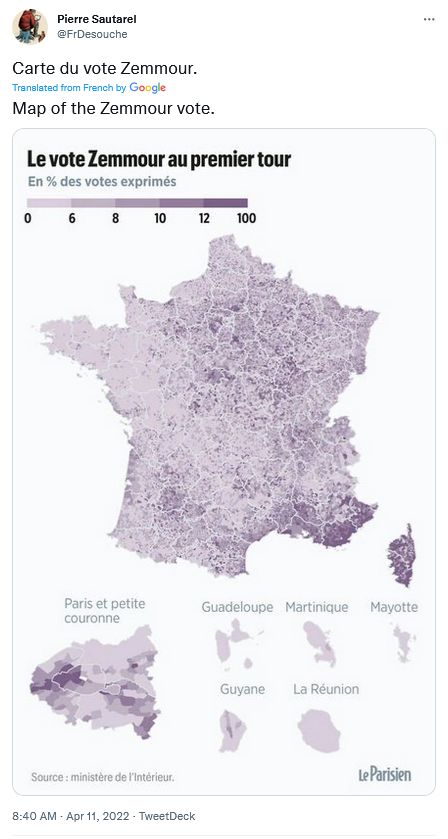 Le Pen, however, has her ear attuned to dÃ©classÃ© whites in peripheral France, who have despite themselves adopted a rather atomized way of life, defined indeed by their automobiles, suburban sprawl, and the sparsification of public services (particularly in rural areas).

Bousquet concludes on these atomized lower-class whites: âDo they still form a people? I do not know, but they are our people. We shouldnât forget it.â

There is now a strange situation in which many activists moved to Zemmour, while Le Pen retainsâessentially through her carefully honed TV appearancesâappeal to a critical mass of largely depoliticized voters.

I remain skeptical of Le Penâs ability to win the second round. (But I must acknowledge that some polls have her neck-and-neck with Macron).

The Leftist magazine Le Nouvel Observateur published a deranged article declaring that if Le Pen is elected she would become commander-in-chief of Franceâs nuclear force de frappe and so would be able to âunleash the equivalent of 48,000 Hiroshimas over a large part of the United States, Russia, China, Africaâand Europe.â[Si Marine Le Pen Ã©tait Ã©lue, voici lâarsenal nuclÃ©aire qui se trouverait entre ses mains(If Marine Le Pen were elected, here is the nuclear arsenal that would be in her hands) by Vincent Jauvert, April 13, 2022

But while Le Pen has deemphasized identitarian themes, she has by no means disavowed them. She proposes a referendum against immigration, abolishing Birthright Citizenship and family reunification, deporting foreign criminals, and reserving welfare to French citizens (or to foreigners who have been working and paying into the system for at least five years).

Macron by contrast has issued almost 1.3 million foreign visas (an increase from the previous presidential administration, despite the sharp decline during the COVID years).

A Le Pen presidency, whatever its other faults, would at least slowdown the demographic dispossession of the Frenchârather like the Trump Administration did.

Like MÃ©lenchon, Le Penâs proposals of protectionism and give-aways are probably economically ill-advised (in my opinion). While Le Pen wants to replace the EU with an âAlliance of European Nations,â it is not clear what this would mean in practice.

There is a significant risk a Le Pen presidency would face Trumpian ineffectivenessâespecially given the inevitable sabotage of huge swathes of the Media-Political establishmentâand Brexit-type time-wasting. There is a troubling lack of prioritization.

But perhaps a president Le Pen would be able to focus on popular, actually doable actionsâwhich is what Matteo Salvini did, with great effectiveness, during his short stint as Interior Minister of Italy prior to being ousted in a parliamentary coup.

Guillaume Durocher [Tweet him] is a European historian and political writer. French Politics Is Built Around the Principle of Stopping Marine Le Pen Becoming President
Daniel Barge
• 5 Comments • Reply
← Science and Remigration
Hide 19 CommentsLeave a Comment
"Le Pen vs. Macron: Is France On the Move?"
• 19 Comments
Commenters to Ignore
Commenters to ignore (one per line)

← Science and Remigration
Current Commenter
says:
Current Date at Time Now
Leave a Reply - Comments on articles more than two weeks old will be judged much more strictly on quality and tone
Cancel Reply
Commenting Disabled While in Translation Mode