Nineteenth-century artistâs impression of the Library of Alexandria
◄►Bookmark◄❌►▲ ▼Toggle AllToC▲▼Add to LibraryRemove from Library • BShow CommentNext New CommentNext New ReplyRead More
ReplyAgree/Disagree/Etc. More... This Commenter This Thread Hide Thread Display All Comments
AgreeDisagreeThanksLOLTroll
These buttons register your public Agreement, Disagreement, Thanks, LOL, or Troll with the selected comment. They are ONLY available to recent, frequent commenters who have saved their Name+Email using the 'Remember My Information' checkbox, and may also ONLY be used three times during any eight hour period.
Ignore Commenter Follow Commenter
Search Text Case Sensitive  Exact Words  Include Comments
List of Bookmarks

In the cosmopolitan atmosphere of Hellenistic culture each ethnic community was self-conscious of its historical traditions and of the way in which these traditions related to those of other groups. . . . The work of most of these historians exists now only in quotations and extracts in the writings of later Christian writers . . . In second century Palestine B.C.E. Palestine a bilingual, upper class Jew named Eupolemus wrote a history entitled Concerning the Kings in Judea, though its scope was actually much broader. Eupolemus, a friend of Judah the Maccabee, was concerned with glorifying Israelite history and he elaborated the biblical narrative with additional legendary details. He presents Moses as a culture-bringer, specifically as the inventor of the alphabet, which was later borrowed by the Phoenicians and the Greeks. The influence and splendor of the Israelite kingdom under David and Solomon was a particular theme of Eupolemus. He describes the lavishness and superb construction of the temple, along with the contributions made by Hiram, king of Tyre, and Vaphres, king of Egypt. According to Eupolemus, Solomon responded to these contributions with extravagant gifts of his own, including a gold pillar for the temple of Zeus in Tyre. . . .

An anonymous writer, probably a Samaritan, wrote a highly legendary history in which various details of Greek and Babylonian mythology are harmonized with biblical traditions. . . . Abraham is presented as the discoverer of astrology, which he taught to the Egyptians during his sojourn there. The correlation of biblical figures with pagan mythological and heroic figures is characteristic of several of these Hellenistic Jewish historians, most notably Artapanus. More a writer of historical romances than a historian, Artapanus recounts the stories of Abraham, Joseph, and Moses. Moses is presented as an inventor of basic technologies, a philosopher, a general in the Egyptian army, the organizer of Egyptian religion (!), and a man regarded as a virtual god by the Egyptians, who identified him with Hermes (the Greek equivalent of the Egyptian god Thoth). . . .

Against Apion [by the Jewish historian Josephus] is a book devoted to refuting slander leveled against Jews by gentile writers. It testifies to the competitive environment in which various ethnic groups interpreted their history and traditions in the Hellenistic and Roman periods. . . .

As early as the second century B.C.E., Alexandria produced a Jewish philosopher in the person of Aristobulus. Although his work survives only in quotations, he apparently wrote an extensive philosophical commentary on the Pentateuch. Aristobulus claimed that the law of Moses already contained what Greek philosophy later expounded. Indeed, he argued that Greek philosophers such as Pythagoras, Socrates, and Plato derived their ideas from Jewish law.

Whether or not there was a tradition of Hellenistic Jewish philosophers, the Egyptian Diaspora produced a truly significant intellectual figure in Philo of Alexandria, who flourished around the turn of the era. . . . Throughout his writings . . . philosophy and biblical interpretation are always closely intertwined as Philo attempts to show that true philosophy is nothing other than the understanding of the Law of Moses.[1]Carol A. Newsom, âThe Dead Sea Scrolls and Other Jewish Literature,â in The Oxford Study Bible (New York: Oxford University Press, 1992), pp. 108-110*.

Given our level of technological innovation and global interconnection, there are no previous historical periods really analogous to our own. The one that comes closest however may be the Alexandrian age, when the peoples of the eastern Mediterranean and Middle East were intermingled under a common Hellenistic culture in the wake of Alexander the Greatâs conquests. 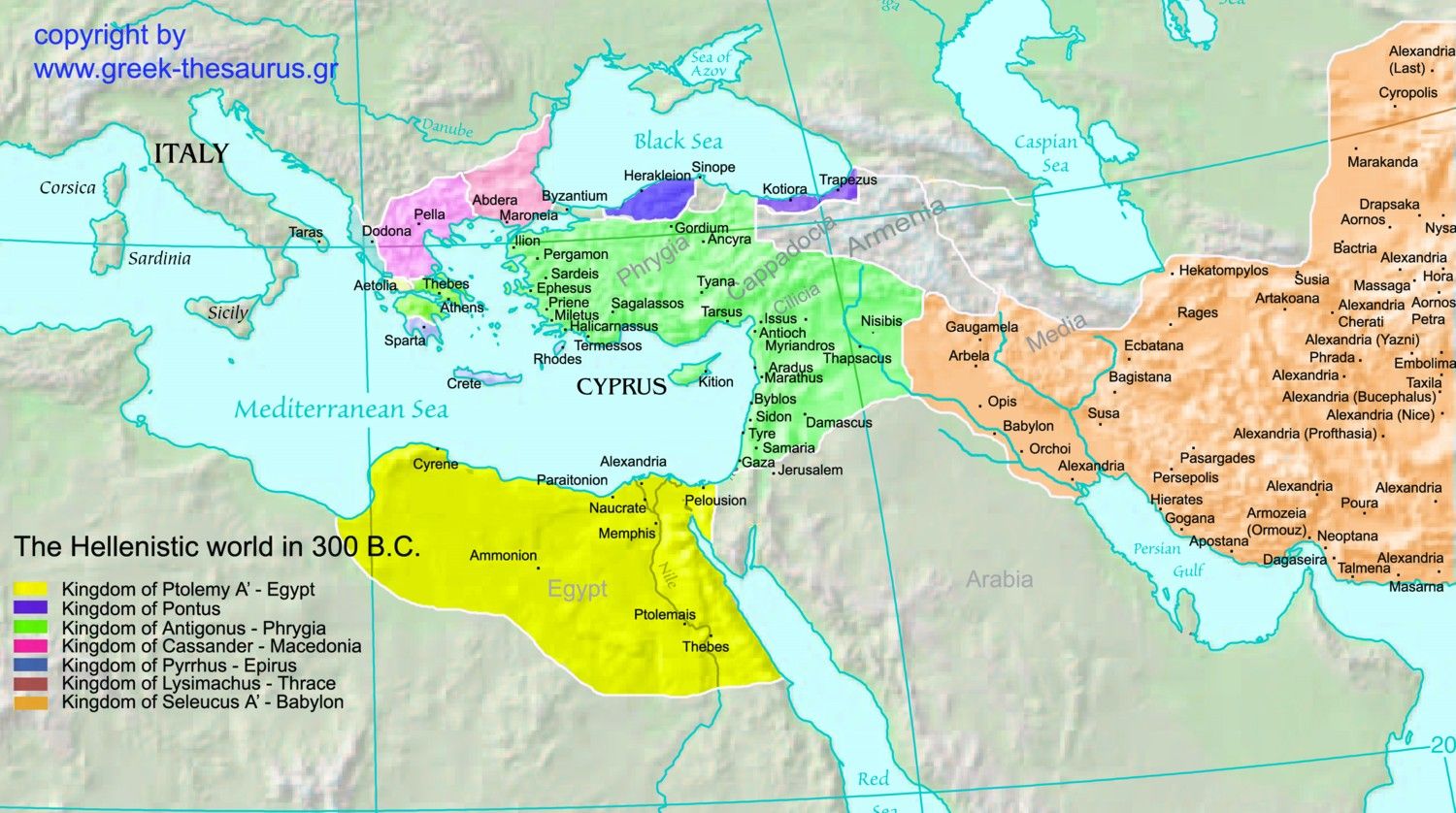 This was an age of great cultural syncretism and scholarship. The Library of Alexandria gathered hundreds of thousands of books and undertook biological, chemical, and astronomical research. There were considerable scientific discoveries: the circumference of the Earth, the Earthâs orbit around the Sun, blood circulation . . .

These cosmopolitan periods harness the latent potential of scattered human intellect through interconnection. However, as Emil Cioran endlessly laments, these are also periods of biological decline and relative cultural sterility, the main achievements being compilations of existing cultures. Cosmopolitan eras sustain themselves by inertia and, worse, a kind of vampirism: living at the expense of centuries or even millennia of accumulated cultural and biological capital.

These are not periods of ethnic harmony. As Carol Newsom suggests, the common culture of the Hellenistic world was an ethnic battlefield, in which each tribe and religion sought to narcissistically rationalize and distort ârealityâ in their favor. This tendency is particularly striking concerning the Jews.

Nietzsche muses that much of the Old Testament was âfalsifiedâ history. Russel E. Gmirkin claims that the Torah, the Law attributed to Moses, was in fact inspired by Platoâs Laws and is a kind of implementation of Platoâs ambition of setting an eternal law and constitution for a people. The biblical scholar Denis MacDonald has written numerous works similarly arguing that much of the Gospels and early Christian apocrypha are imitations and parodies of Homer.

The Romans, who ruled and had assimilated all sorts of peoples, considered the ancient Jews to be a minor tribe, remarkable for its fanaticism and ethnocentrism. As such, Jews are rarely mentioned in Roman literature, but when they are â as by the philosopher-statesmen Cicero and Seneca â the comments are very negative and voice complaints which would become widespread in later epochs.

The Jewish historians by contrast attempted to attribute many the great and prestigious accomplishments of the Egyptians, Phoenicians, and Greeks to their own ancestors. Similarly, the leaders of rabbinical Judaism sought to reinterpret their sacred texts according to their own doctrines:

The Talmuds do seek in varying degrees to link Mishnaic [early Jewish legal] teaching to Scripture, but again not in a systematic fashion and not with any sense that rabbinic teaching depends on the Bible for its own validities. This central corpus of rabbinic literature thus makes clear that rabbinic Judaism in its own formative period assigned the sacred canon of Scripture an essentially marginal role in Jewish religious life. . . .

Substantial portions of the Talmud take the form of attempts to associate with Scripture rabbinical teachings about all sorts of topics that have at first glance no particular connection to the passages adduced. . . . Through skillful midrashic [ancient Jewish biblical interpretation] elaboration, virtually all of rabbinic teaching could be presented as interpretation of Scripture and all of Scripture could be understood as conforming to rabbinic teaching. . . .

Midrash was unconcerned in principle with the plausibility of its exegesis or with the original context of its biblical raw materials; any meaning which any interpreter could derive from any detail in the biblical text could at least in theory be offered as midrash on that text.[2]Robert Goldenberg, âHebrew Scriptures in Early Post-Biblical Judaism, with Special Reference to the Rabbinic Tradition,â in ibid., p. 125*.
(Carol A. Newsom, âThe Dead Sea Scrolls and Other Jewish Literature,â in The Oxford Study Bible (New York: Oxford University Press, 1992), pp. 108-110*.)

The last Pagan Roman emperor, Julian the Apostate, forsook Christianity arguing that the Jesus cult was not in fact announced by or compatible with the old Jewish scriptures. However, we often forget that indeed Judaism as we know it, rabbinical Judaism, is a post-Christian innovation. The real relationship between our Jews and the ancient Israelites is not particularly clear, let alone if they are their heirs. Perhaps rabbinical Jews are merely a small, unrepresentative, and perhaps elite offshoot of the old Israelite nations, while the rest got assimilated into the surrounding cultures.

Anyway, I thought it was interesting that a mainstream bible studies work should be making these points, which have been made out by Alain Soral, in his denunciation of Judaism.

All this is ancient history. But while our technology may now be indistinguishable from magic, and our way of life is incomparably transformed, our basic biological human nature has not changed very much. Beneath the cosmopolitan pretenses of the United Nations and the Davos set, our globalized world remains a cultural and demographic battleground, in which dishonest arguments in the name of ethnic narcissism and ideological-institutional interests are omnipresent. Are the White Boys Willing to Die in Defense of the Gay Disco?
E. Michael Jones
• 425 Comments • Reply
← We Are All Totalitarians NowThe Wisdom of Jean-Luc Picard →
Hide 157 CommentsLeave a Comment
"Jews Invented Everything, Say Ancient Jews"
• 157 Comments
Commenters to Ignore
Commenters to ignore (one per line)

• Replies: @Agathoklis
← We Are All Totalitarians NowThe Wisdom of Jean-Luc Picard →
Current Commenter
says:
Current Date at Time Now
Leave a Reply - Comments on articles more than two weeks old will be judged much more strictly on quality and tone
Cancel Reply
Commenting Disabled While in Translation Mode