Jean Raspail, the famed French explorer and writer, has passed away at the age of 94. This man is famous in our circles, not just in France but around the world, for his controversial 1973 novel The Camp of the Saints, which imagined what would happen if 1 million Third-World immigrants suddenly landed on the southern French coast.

Apparently, the head French counterespionage in the 1980s, Alexandre de Marenches, gave a copy of the novel to President Ronald Reagan. My own grandfather gave a copy to my father. This is a classic of Western identity under siege. 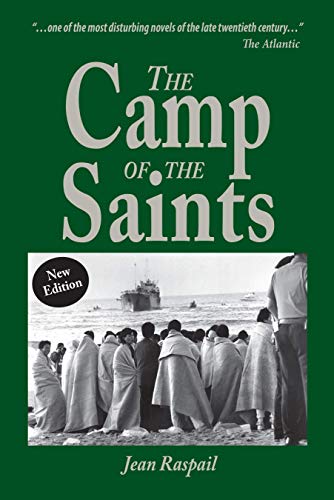 Raspail in fact was a man varied interests. He cannot be accused of being an ignorant xenophobe. He spent many years of his life on various expeditions getting to know exotic cultures, whether exploring the Inca heartlands and Tierra del Fuego, recording the deplorable social conditions of the Redskins of the United States, or living in Japan. As with many thoughtful Westerners, knowledge of the beauties and richness of distant peoples went hand-in-hand with a greater appreciation for his own Western identity. Raspail has won many prizes over the years for his bountiful and diverse literary work.

With that, I leave you with a translation of one of Raspailâs few public pronouncements, an article published in Le Figaro newspaper on 17 June 2004

The Fatherland Betrayed by the Republic

I circled around this theme like a dog-handler around a parcel bomb. It is hard to approach it frontally without it exploding in your face. There is the risk of civil death. And yet, this is the crucial question. I hesitated. All the more so given that in 1973, in publishing The Camp of the Saint, I said just about everything on the topic. I donât have much to add, other than the fact that I think the goose is cooked.

I am convinced that our fate as Frenchmen is sealed, because âthey are at home in my homeâ ([according to French Socialist President FranÃ§ois] Mitterrand), within a âEurope whose roots are as much Islamic as Christianâ ([according to French conservative President Jacques] Chirac), because the situation is irreversibly moving towards the final swing in the 2050s which will see the ânative Frenchâ become reduced to the more elderly half of the countryâs population, the rest being made up of Africans, Maghrebi or Black, and all sorts of Asians hailing from the inexhaustible reservoir of the Third World, with a strong Islamic majority, including Jihadis and fundamentalists, the latter dance only just beginning.[1]The delicate imam of VÃ©nissieux, thanks to birthright citizenship, has alone produced sixteen little French citizens. (Raspailâs footnote.)

France is not the only nation concerned. All of Europe is marching towards death. There is no shortage of warnings: notably a report from the United Nations (which is overjoyed by this development), the indispensable works of Jean-Claude Chesnais and Jacques DupÃ¢quier;[2]A French demographer and demographic historian, respectively. â GD but these are systematically downplayed and the INED [National Institute for Demographic Studies] is pushing disinformation. The almost sepulchral silence of the media, governments, and European institutions on the demographic crash of the EU-15[3]The then-members of the EU, covering most of Western Europe. is one of the most astonishing phenomena of our time. When there is a birth in my family or among my friends, I cannot look at this baby without thinking of what is being prepared for the fecklessness of our âgovernanceâ and what he will have to face when he grows up . . .

Not to mention that the ânative Frenchâ â constantly beat over the head to throbbing drumbeat of human rights, of âwelcoming others,â of the âsharingâ dear to our bishops, etc, boxed in by a vast arsenal of repressive âantiracistâ legislation, conditioned from infancy to embrace cultural and behavioral âmÃ©tissageâ [mixing], and âplural Franceâ[4]La France plurielle, a euphemism for âmulticultural France,â when the word âmulticulturalâ still suffered from bad press in our country. and all the excesses of the old Christian charity â will have no other choice than to tighten their belts and melt without complaint into the mold of the new French âcitizenâ of 2050. All the same, let us not despair. Certainly, there will still be what ethnologists call isolates, powerful minorities, perhaps 15 million Frenchmen and not necessarily all of white race, who will still speak our language in its more-or-less preserved integrity and who will stubbornly remain imbued with our culture and our history, as passed down from generation to generation. But it will not be easy for them.

In the face of the various âcommunitiesâ which we see emerge today on the ruins of integration (or rather its gradual inversion: we are the ones who today integrate âthe other,â and no longer the opposite), who in 2050 will be definitively institutionally settled, [the French minority] will in a sense, I am looking for the right term, be a community of French continuity. This community will be founded on families, fertility, the endogamy of survival, its own schools, parallel networks of solidarity, and perhaps even geographical zones, its own slices of territory and neighborhoods, or even its safe zones[5]Places de sÃ»retÃ©, a reference to the areas in which the Protestant minority was allowed to safely resided during Franceâs Wars of Religion. and, why not, its Christian and Catholic faith, if by chance that cement still holds.

This will not be a pleasant situation. The clash will occur sooner or later. Something like the elimination of the kulaks through the appropriate legal means. And then what?

Then France will only be peopled by hermit crabs, whatever their origins, who will live in the shells abandoned by a forever extinct species which was called the French species. A species which in no way prefigured, by God knows what genetic metamorphosis, the species that will bear this name in the second half of this century. The process has already begun.

There is a second possibility which I can only express in private and which would require me to consult my lawyer: that the last isolates resist to the point of engaging in a kind of reconquista, no doubt different from the Spanish one, but inspired by the same motives. A dangerous novel remains to be written on this subject. I will not take charge of this, I have already given. Its author is probably not yet born, but this book will see the light of day at just the right time, of that I am sure . . .

What I donât understand, and what plunges me in the depths of an afflicted confusion, is why so many informed Frenchmen and so many French politicians are knowingly and methodically, I donât dare say cynically, contributing to the immolation of a certain France (let us not say âeternal,â which disgusts certain beautiful souls) on the altar of a exacerbated utopian humanism. I ask myself the same question concering these omnipresent associations defending the rights of this, the rights of that, all these leagues, these societies of thought, these subsidized little offices, these networks of manipulators who have infiltrated the machinery of the State (education, judiciary, political parties, unions, etc.), these innumerable petitioners, these correctly consensual media and all these âintelligent peopleâ who day after day and inject with impunity their numbing substance into the still-healthy organism of the French nation.

Even if I can almost credit them with some degree of sincerity, I sometimes have trouble conceding that these are my countrymen. The word renegade begins to come to mind, but there is another explanation: they confuse France with the Republic. âRepublican valuesâ are evoked in their infinite variation, we learn that to the point of disgust, but there is never a reference to France. Yet France is first a carnal homeland. The Republic, on the other hand, is but a form of government, synonymous for them with ideology, a capital âIâ ideology, the great ideology. It seems, then, that they are betraying the former for the sake of the latter.

Amidst the flotsam of references which I have accumulated in thick folders in support of this assessment, here is one which under friendly airs is quite instructive on the extent of the damage. An extract from a speech by Laurent Fabius at the 17 May 2003 Socialist congress of Dijon: âWhen the Marianne[6]French town halls typically feature a bust of Marianne, the symbol of the French Revolution. â Guillaume Durocher of our city halls will have taken on the beautiful face of a young Frenchwoman of immigrant origin, that day France will have taken a step forward by fully living the values of the Republic . . .â

Since we are quoting people, here are two more, to conclude: âNo amount of atom bombs will be able to prevent the flood made up of millions of human beings who will one day leave the southern and poor portion of the world, to land in the relatively open spaces of the northern hemisphere, in search of survival.â ([Algerian] President [Houari] Boumediene, March 1974.)

And this one, drawn from the twentieth chapter of the Book of Revelation: âWhen the thousand years are completed, will be gathered the nations which are in the four quarters of the earth and the number of whom is as the sand of the sea. And they will go up the breadth of the earth and surround the camp of the saints and the beloved city:â

[3] The then-members of the EU, covering most of Western Europe.

[5] Places de sÃ»retÃ©, a reference to the areas in which the Protestant minority was allowed to safely resided during Franceâs Wars of Religion.