Alain Finkielkraut being confronted by yellow-vest protesters.
◄►Bookmark◄❌►▲ ▼Toggle AllToC▲▼Add to LibraryRemove from Library • BShow CommentNext New CommentNext New ReplyRead More
ReplyAgree/Disagree/Etc. More... This Commenter This Thread Hide Thread Display All Comments
AgreeDisagreeThanksLOLTroll
These buttons register your public Agreement, Disagreement, Thanks, LOL, or Troll with the selected comment. They are ONLY available to recent, frequent commenters who have saved their Name+Email using the 'Remember My Information' checkbox, and may also ONLY be used three times during any eight hour period.
Email Comment Ignore Commenter Follow Commenter
Search Text Case Sensitive  Exact Words  Include Comments
List of Bookmarks

Alain Finkielkraut was called âa dirty Zionist shit (a Zionist two times again and âshitâ perhaps three times more), a âfascist,â a âracist (two times), and âhateful.â He was asked to leave the demonstration in direct times: âget out of hereâ (twice), âpiss off,â âgo back home to Israel!â I can see in all this insults, or defamatory comments, I would even grant a light violence, but I find no trace of a discriminatory motivation. This shows well that the words âanti-Semiteâ and âanti-Semiticâ are used in an absolutely arbitrary manner.

It is true that âZionistâ is often used as a euphemism for âJew.â But it is also true that many anti-Zionists are happy to befriend genuinely anti-Zionist Jews such as Gilad Atzmon (himself an associate of Soralâs). Finkielkraut was likely attacked for his values rather than his ethnicity.

This subtlety did not prevent the incident from triggering a veritable pro-Semitic moral panic across the entire politico-media class. The media lamented the âanti-Semiticâ attack on Finkielkraut and he was comforted by politicians from across the political spectrum, from the far-left to the far-right, including the bulk of prominent nationalist and identitarian figures.

Much of the foreign press (the London Times, The Jerusalem Post, the Jewish Telegraph Agency . . .) misrepresented things further, claiming that Finkielkraut had been called a âdirty Jew.â This is a genuine example of fake news.

Then a Jewish cemetery in the Alsatian village of Quatzenheim was desecrated, with over 90 tombstones being sprayed with with swastikas and anti-Semitic slogans. One tombstone was sprayed with the words: âElsassisches Schwarzen Wolfe,â meaning âAlsatian Black Wolves,â an Alsatian nationalist group which has been inactive since 1981 . . . Of course, a hate hoax cannot be excluded: one thinks of the recent Jussie Smollett debacle or the Israeli-American who instigated 2000 supposed anti-Semitic bomb and shooter threats over the years.

For those whom anecdotal evidence was not sufficient, the regime also trotted out the usual âstatisticsâ about, seemingly released every year of every decade, showing a massive increase in âanti-Semiticâ acts. I will only say that such statistics are dubious in general, repetitive, and obviously ethnically and politically convenient. Grand old man Jean-Marie Le Pen commented:

There is no anti-Semitism in France which would justify a mobilization of public opinion. . . . Incidentally, weâre given a figure of a 74% increase in [anti-Semitic] attacks. Compared to what? I ask that we have the list of all these attacks committed against the Jews, in such a way that we can actually tell the difference between a graffiti, a murder, a telephone call, or a schoolyard scuffle. It is true that radical Islamism is extrapolating in a sense the Israeli-Arab conflict into France. It is much more a matter of anti-Zionism than anti-Semitism.

Regardless of whether the Quatzenheim incident is authentic, and it could well be, this event immediately prompted a solemn visit by the President of the Republic himself, Emmanuel Macron. This was followed by a national call to demonstrate against anti-Semitism, initiated by the Socialist Party but with virtually the entire political class following suite.

The response of both of the indigenous French people and the Africans/Muslims was lackluster however. According to the official media, some 20,000 people demonstrated in Paris and negligible amounts in the rest of the country. Actually, as the 20,000 figure was provided by the Socialist Party itself, we can be sure that this is an overstatement.

Serge Klarsfeld, one of the leading lights of the highly-profitable local holocaust industry, could not conceal his disappointment, telling the top journalist Jean-Pierre Elkabbach (a fellow Jew[1]Soral has observed that while Jews make up only 1% of the French population many French talk shows resemble âa little Jewish theater.â This disparate outcome and ethnic privilege should be noted.) on television:

This is in stark contrast with the similar 1990 Carpentras Affair, during which a Jewish cemetery was also desecrated. The pro-Semitic demonstrators following this incident numbered over 200,000 in Paris alone. The event was skillfully exploited by the Socialist President FranÃ§ois Mitterrand and by the politico-media class in general by abusively linking this event to Jean-Marie Le Penâs rapidly-rising Front National (FN). This contributed to making the FN unhandshakeworthy and to preventing any alliance between Le Penâs nationalists and the mainstream conservatives, which would have spelled doom for the Left. It was later shown that the FN had nothing to do with the incident, which had apparently been instigated by a handful of neonazis with no links to the party.

People should generally speculate less about the authenticity of an event (e.g. 9/11, the Reichstag Fire), which is often difficult to prove one way or the other, than on whether the event has been used as a pretext by the ruling elite to do something questionable or disproportionate (often something which it had been hankering to do for a long time), which is typically quite easy to demonstrate.

This time, as Klarsfeld complains, the gentiles were not so interested in these theatrics. However, the event is having significant political and legal effects. The Macron regime is exploiting the incident to implement measures which have long been demanded by the CRIF (Representative Council of Jewish Institutions of France), the countryâs powerful official Jewish lobby. Macron himself appeared before the (very conveniently-timed, as it happens) CRIF annual dinner, where the crÃ¨me de la crÃ¨me of the French political class regularly appear, in a solemn ritual of solidarity and genuflection before the Lobby-That-Doesnât-Exist.

French President Emmanuel Macron with CRIF President Francis Khalifat (himself the successor to the long-time present Roger Cuckierman, you canât make some things up).

Macron made a number of promises to the CRIF:

Surprisingly, Soralâs anti-Zionist and civic nationalist association ÃgalitÃ© & RÃ©conciliation actually hailed Macron for resisting the CRIFâs demands, bowing to them only reticently, and in some cases only symbolically. After all E&R itself, the most prominent anti-Zionist organization in France, will not be banned. The social-media censorship legislation will only be presented in parliament in May. And, apparently, Franceâs redefinition of anti-Semitism to include anti-Zionism will not be legally-binding, but will be used to educate to policemen and judges (go figure). All this, E&R surmises, left the CRIFâs audience underwhelmed. And, E&R notes that the CRIFâs demands are âextremely anti-popular and legally untenable . . . unless there is a complete shift to a communitarian [ethnic] dictatorship.â

Let us return to the original âvictimâ of all this, Alain Finkielkraut. Following the incident, an immediate âinvestigationâ was launched of the various âperpetrators,â showing the absurd judicialization of French life. Finkielkraut, recently appointed as one of the forty âImmortalsâ of the AcadÃ©mie franÃ§aise, has been known to the younger generation primarily as an anti-racist Jew turned neoconservative once he realized Islamic immigration to France was bad for the Jews. He has become a popular Internet meme for his numerous televized hysterical outbursts: âShut up! Shut up!â

Personally I havenât followed Finkielkraut very closely and whenever I listen to him his discourse sounds like over-complicated pilpul. That said, he has objectively voiced a number of French identitarian concerns over the years. In 2005 he correctly and controversially told the Israeli newspaper Haaretz: âPeople say that the French national [football] team is admired because it is black-blanc-beur [black, white, Arab]. In reality, the national team is today black-black-black, which makes it the laughingstock of Europe.â There was clearly an element of rivalry in claiming the status of top ethnic victim. Finkielkraut also told Haaretz:

I was born in Paris and am the son of Polish himmigrants, my father was deported from France, his parents were deported and murdered at Auschwitz, my father returned from Auschwitz to France. This country deserves our hatred. And what it did to my parents was far more brutal than what it did to the Africans. And what did it do to the Africans? Nothing but good. My father was forced to endure hell for five years. And I was never taught hatred. Today the blacksâ hatred is even stronger than the Arabsâ.

In 2017, upon the death of the French rock singer Johnny Hallyday, Finkielkraut told the right-wing journalist Ãlisabeth LÃ©vy (another fellow Jew, at once moderately anti-Muslim and hysterical on anti-Semitism): âthe little people, the little whites went in to the streets to say adieu to Johnny. […] The non-natives[2]Actually, the non-souchiens, the non-French-by-blood. Souchien is a term coined by âanti-colonialâ Arab-Berber racial activists. It is a homophone for sous-chien, âsub-dog.â shone by their absence.â 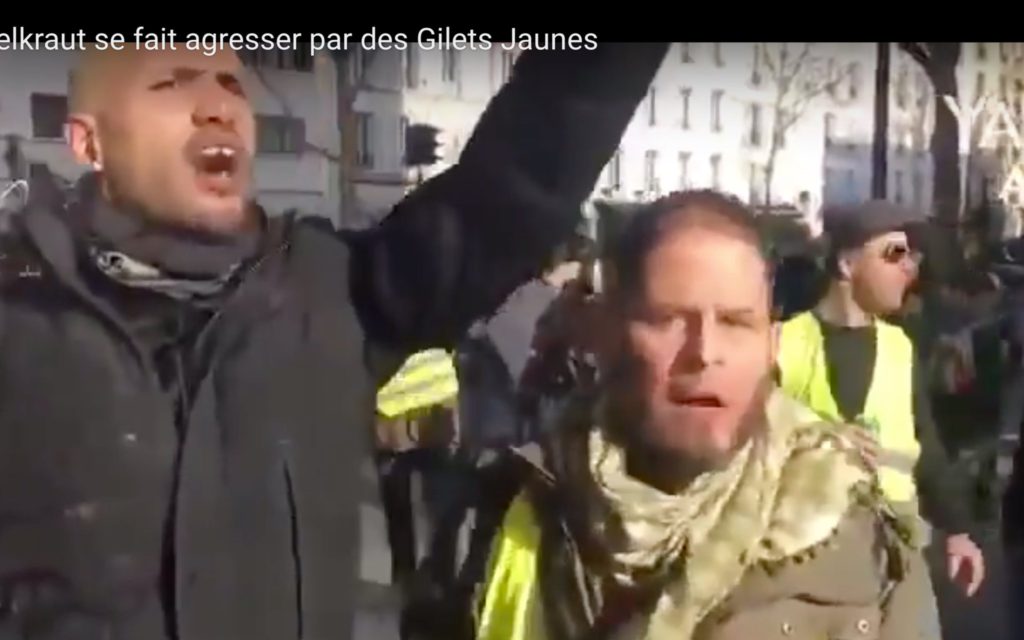 In the footage of his âassaultâ by the yellow-vests, Finkielkraut however played his role to perfection, bearing his grotesque attackersâ insults with calmness and dignity. He then appeared on the radio to discuss the incident and emphasized that the attackers were probably of Islamic origin:

When one hears this slogan, âFrance is oursâ [pronounced by one of the yellow-vests], one could thinks this is a variant of âFrance for the Frenchâ of classical fascism. But in fact no: he is saying âFrance is ours, it belongs to us Islamists.â He therefore is a believe in the theory of the Great Replacement. I do not say this Great Replacement is taking place, but for him it should take place. And for him, the Jews should be the first to be kicked out.

One will appreciate the utter tartuffery of claiming an opponent is promoting the Great Replacement while denying that it is taking place.

I will take this opportunity to emphasize again the Soviet-style absurdity of the French politico-media classâs denial of the Great Replacement. The replacement of the indigenous French population by both European and non-European (overwhelmingly African/Muslim) allogenes is visible in every major French city and, increasingly, in towns and villages across the country. And yet, our treacherous ruling elite, media, and even Wikipedia claim that all talk of a Great Replacement is a mere âconspiracy theory.â Iâm not sure even Pravdaâs claims concerning the workersâ paradise were so bold.

As it happens, Finkielkrautâs attackers seem to have been Muslims and one, âBenjamin W.,â appears to be an indigenous French convert. It seems quite likely that they were indeed influenced by Soral or at least the multiracial âpatrioticâ anti-Zionist culture he has created.

All in all, these events are illustrative of the French and Franco-Jewish elites manias for anti-Semitism and the growing indifference of the French and Afro-Islamic populations to such theatrics. The Lobby-That-Doesnât-Exist â denounced by French leaders as varied as Charles de Gaulle, Raymond Barre, and FranÃ§ois Mitterrand â continues to play the victim. But their power is weakening; and they know it. Macron himself, a convinced high-globalist, is only moderately interested in these matters. Many leading Jews, Bernard-Henri LÃ©vy and Daniel Cohn-Bendit, have been extraordinarily alarmed by the uncontrolled and populist nature of the yellow-vest movement. Time will tell if this movement will participate in Franceâs liberation from globalism and the lobbyâs distorting influence.

[1] Soral has observed that while Jews make up only 1% of the French population many French talk shows resemble âa little Jewish theater.â This disparate outcome and ethnic privilege should be noted.