I like to give credit where credit is due. The left-globalist newspaper LibÃ©ration â co-owned by Ãdouard de Rothschild, the Franco-Israeli media-mogul Patrick Drahi[1]In addition to LibÃ©ration, Drahi also owns the magazine LâExpress, the radio station RMC, and the business television channel BFM TV. During last yearâs presidential elections, Drahiâs media were frequently accused of giving disproportionate and excessively favorable coverage to candidate Emmanuel Macron., Bruno Ledoux â recently reported an interesting piece of information: a sharp 20% rise in the non-terrorism-related homicide rate in France over the last two years.

Franceâs homicide rate had already spiked in 2015-2016, with the November 2015 Bataclan terrorist attacks which killed 130 people (and seriously wounded 99), mostly at a rock concert featuring Eagles of Death Metal, and the 14 July 2016 (that, is Bastille Day) suicide-by-truck which killed 86 people (and wounded 456) by brutally ramming pedestrians on Niceâs iconic Promenade des Anglais.

There have been no major terrorist attacks in France since then. There have been many âminorâ ones however. Some stabbing or shooting by some deranged Muslim, usually leading to their own death and anywhere between zero and a half-dozen murders, is now too banal an event to merit much notice. The perpetrators have, happily, been too incompetent to kill many people. Nonetheless, the list of murders by Islamists is not negligible: the 85-year-old Catholic priest Jacques Hamel was gruesomely beheaded on 26 July 2016, a policeman was shot to death on the Champs ÃlysÃ©e on 20 April 2017, two women were stabbed to death while their assailant shouted âAllah Akhbarâ at a train station in Marseille on 1 October 2017, and a man was stabbed to death in Paris on 12 May 2018.

France, as Donald Trump has pointed out, is no longer France and we can no longer enjoy nice things in this country without the risk of Muslims and Africans murdering people on the street at random. The Islamist murderers particularly like attacking at major landmarks, such as churches, museums, airports, and so on. Rather than secure the existence of the indigenous French people, the authorities prefer purely cosmetic and/or liberticidal measures, such as putting up bullet-proof glass in front of the Eiffel Tower or expanding the stateâs already vast array of spying and censorship legislation.

The repetition of such incidents can give a misleading impression of a country. While Islamic immigration to Europe means that every West-European is now a potential victim of Islamist terrorism, the fact is that the average European city remains very safe despite their diversity, far safer than those of the United States, let alone of Brazil. It is obvious that Europe would be even more peaceful if we had not allowed Third World immigration, but really, Europe has remained very peaceful.

The latest figures suggests that this may be changing. As LibÃ©ration points out, despite the lack of major terrorist attacks since 2016, the homicide rate according to official statistics has not gone down. This means that the level of day-to-day run-of-the-mill murder has gone up by 20% over the last 12 months, about 150 more killings annually than in preceding years. As LibÃ©ration writes:

This statistic is striking. Because it shows . . . a break with 15 years of decline or stagnation [of homicide]. Because it echoes developments seen in neighboring countries. But also because it was completely overlooked by the Ministry of the Interior.

There have also been upticks in crime in Britain, Germany, and the Netherlands in recent years. The case of Germany was obviously linked Chancellor Angela Merkelâs illegal welcoming of one-million-plus migrants into the country in 2015. The authorities now claim the crime spike has completely subsided, now that the migrants have âsettled downâ so to speak, although we can ask to what extent the data has been massaged for political reasons.

The increases in Britain, particularly Londonâs murder rate overtaking New York Cityâs, and France are if anything more significant in that these are probably not linked to massive recent migrant flows, but simply indicate the society getting more violent in general. We see increases in (non-terrorist) murder rates in France: 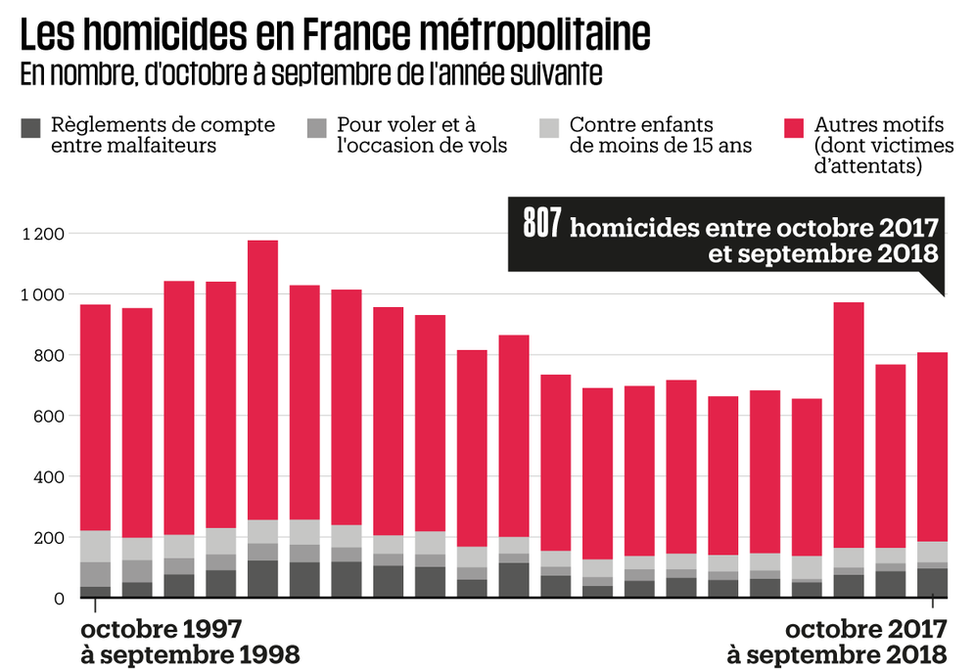 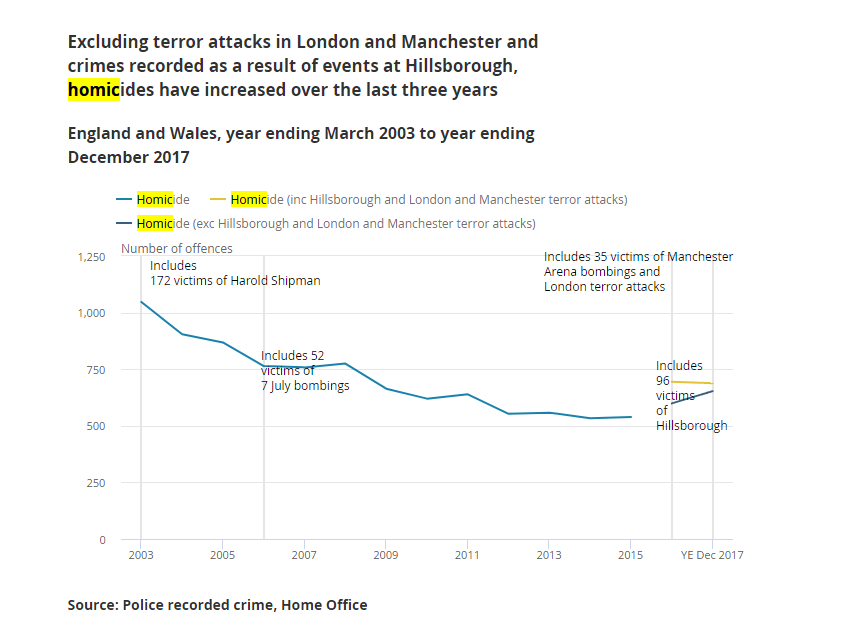 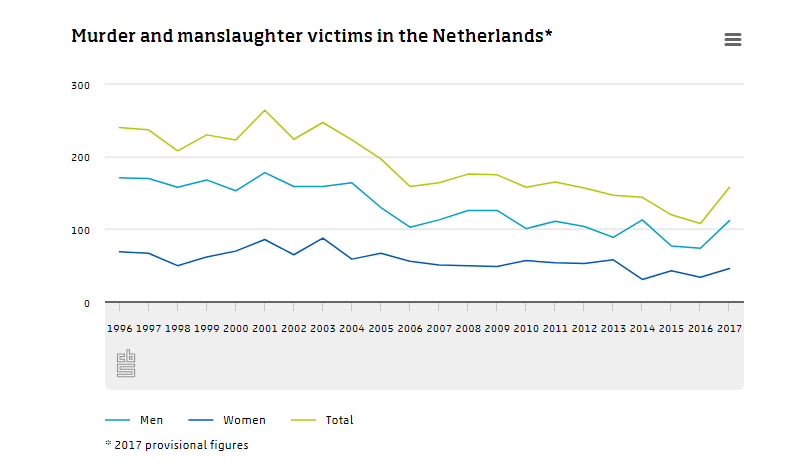 As indicated by the charts, Western Europe is not however particularly violent compared even with the 1990s or early 2000s. I notice that many nationalists seem to think that civil war is just around the corner in Europe, but generally speaking, the evidence does not bear this out. I am also skeptical of this simply given my experience living in major European cities, which are very diverse, and in which I have never felt unsafe, notwithstanding the undoubted bad neighborhoods, occasional terrorist attacks and petty criminality.

I for one think that multicultural consumerist social-democracy is, materially speaking, quite viable: spy on people, take away their guns, give them free money from the government so as to purchase the necessary food and electronics, and most people will simply be quite docile, including NAMs. Our societies have gotten pretty good at making sure everybody has a tolerable amount of stuff, despite the rising tide of color.

But, the recent evidence suggests we may already be hitting the limits of the pacifying powers of the Western European Nanny/Police State. If the rise in crime continues, it will be interesting to see how fast it increases, along with the steady increase in the Afro-Islamic population. Passed a certain threshold, a snowball effect seems quite likely as soon as the White Liberal State is no longer able to babysit so many NAMs. Then, we might have an American or even Brazilian type of situation, but Iâd guess we are decades away from that.

Muslims in France: Some Data
Guillaume Durocher
• 566 Comments • Reply
← Loro & My WayThe Economics of the Great Replacement →
Hide 51 CommentsLeave a Comment
"France Is Becoming More Violent"
• 51 Comments
Commenters to Ignore
Commenters to ignore (one per line)

← Loro & My WayThe Economics of the Great Replacement →
Current Commenter
says:
Current Date at Time Now
Leave a Reply - Comments on articles more than two weeks old will be judged much more strictly on quality and tone
Cancel Reply
Commenting Disabled While in Translation Mode